The TicWatch Pro and the Fitbit Versa 2 are made for different consumers but there is also a lot of overlap between them. 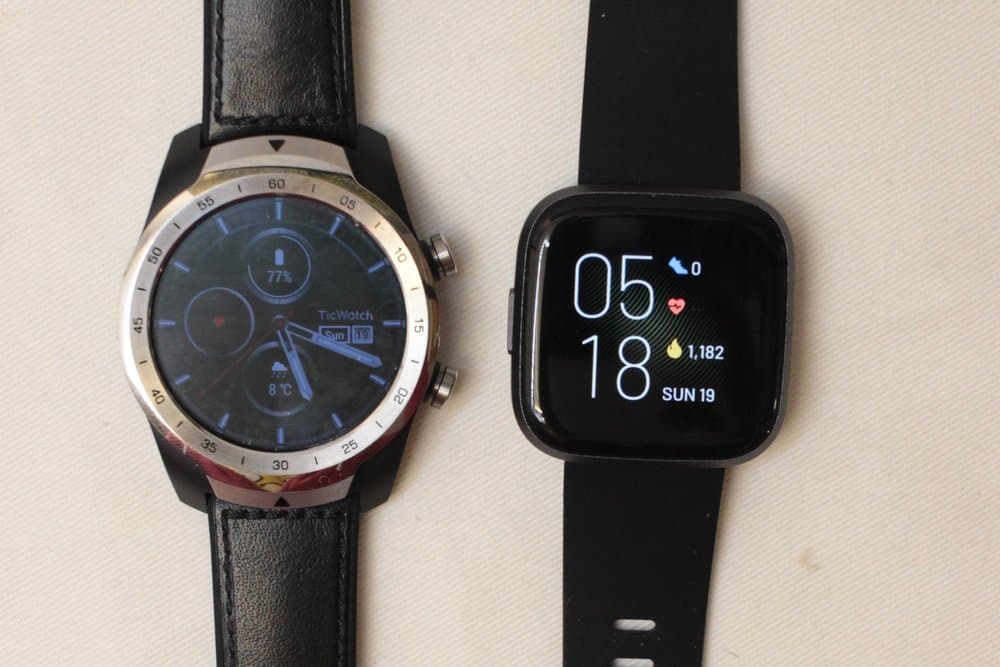 The TicWatch Pro and the Fitbit Versa 2 are extremely good watches but both are aimed at a slightly different smartwatch buyer, and knowing which camp you’re in really will help you make the optimal choice.

The TicWatch Pro is a full-feature smartwatch built on the Wear OS platform. Compared to the Fitbit Versa 2, you get many more options for productivity which you will miss out on the Fitbit. Whereas the Fitbit has many more intricate options for sportspeople to track, visualize and compare their workout activities.

Perhaps that’s why there’s a “Pro” in the TicWatch, presumably short for “productivity.” Whereas there’s a “fit” in Fitbit. 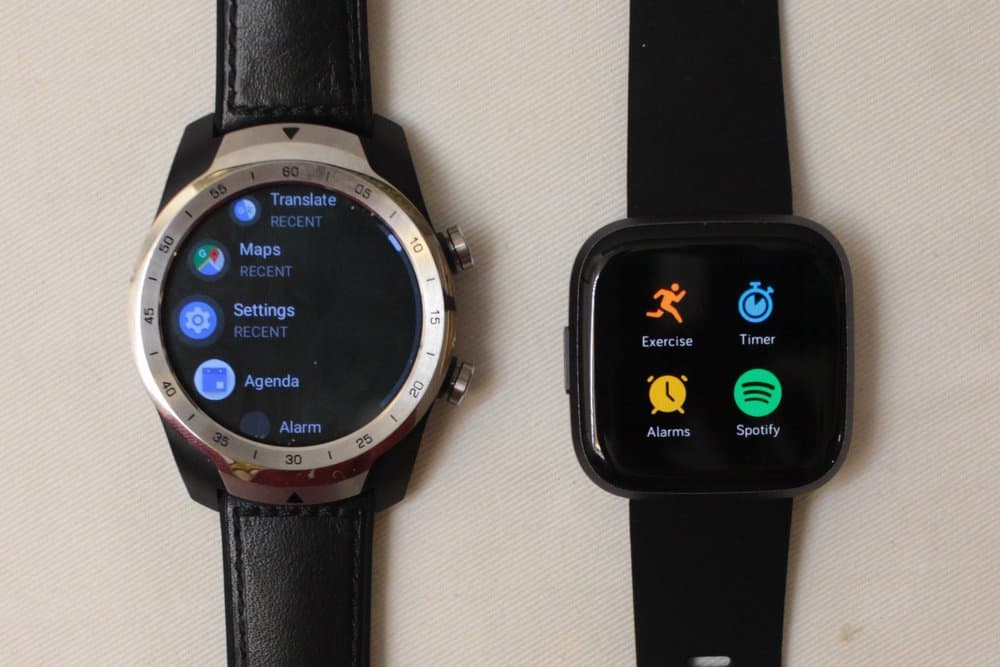 The productivity you get from a full-fledged watch cannot be beaten. You can call, use apps that help you navigate, take notes, translate foreign languages in addition to doing typical tasks. You can do all of this with the TicWatch Pro. 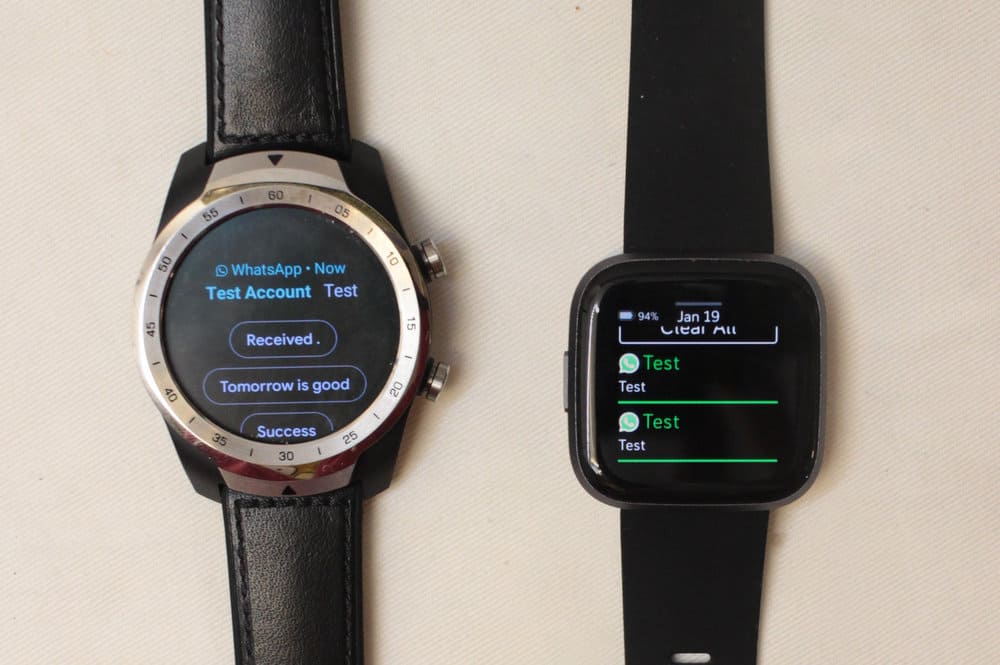 The TicWatch also has a slightly larger screen at 1 ⅜” as compared to the Fitbit’s 1.34 inches. The TicWatch Pro also comes with two buttons which allow you to activate Google Assistant. Whereas the Fitbit Versa 2 comes with just one button which allows you activate Alexa or run a shortcut to various apps and settings including Fitbit Pay, Exercise, Music Controls, Timers, Notifications and more.

Just by taking a cursory look, you’ll notice the Fitbit is a lot sharper than the TicWatch Pro. The TicWatch Pro really feels like looking at a 720p screen and the Fitbit Versa 2 looks like a 1080p screen. They’re both high definition, no doubt, but the TicWatch Pro’s screen just feels a little bit more pixelated. 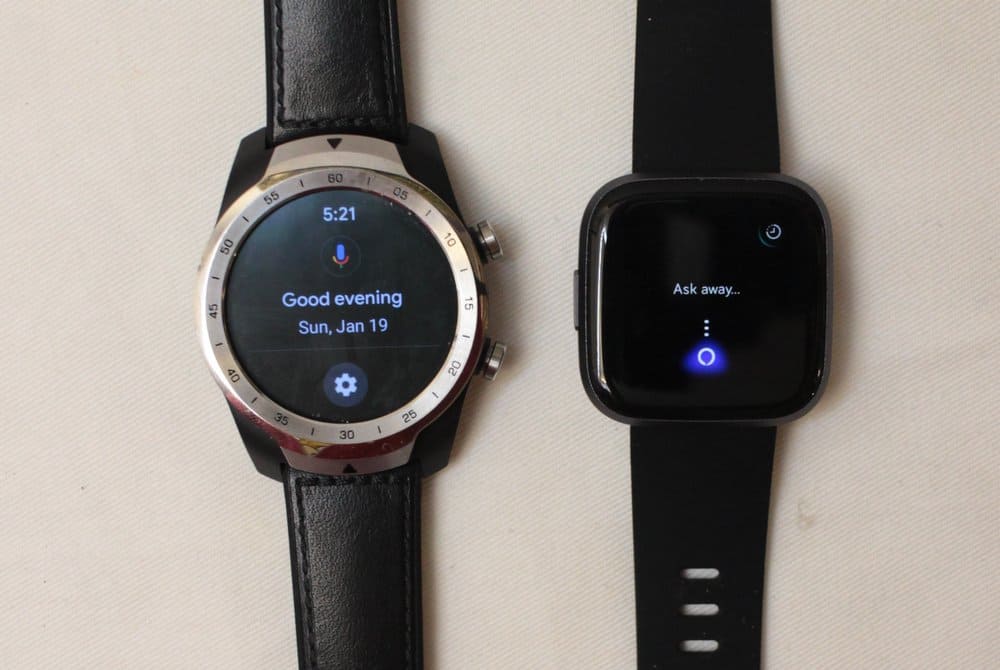 The different voice-activated assistants on these watches lead to the first win for the TicWatch Pro. Upon various tests, Google Assistant provided better integration and information than did Alexa.

Google Assistant not only showed me a photo of the pharmacy, it was also able to help me navigate, using Google Maps, to the pharmacy. 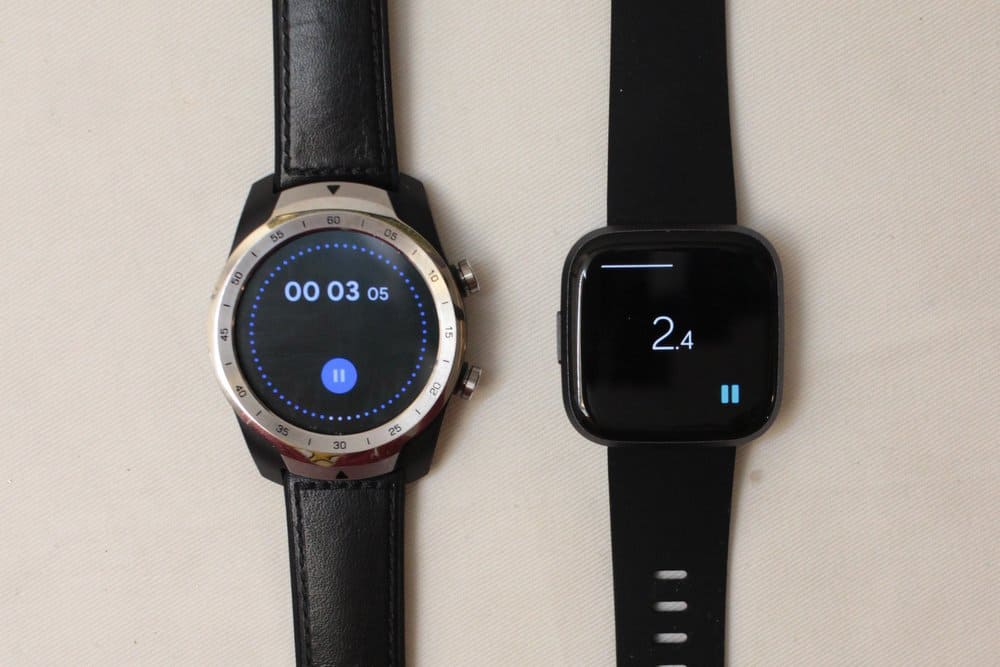 Google Maps is one of the many apps that are available to a Wear OS watch such as the TicWatch Pro. You can also access other apps from Google such as Google Keep and Translate. The Google Play app store for Wear OS is extensive and you will find many productivity, entertainment (Spotify, for example), and sports apps here.

Fitbit’s apps trail Google’s offerings by miles. You could download a calculator, Starbucks Card app, United Airlines app, a calculator and a flashlight. Few other apps caught my eye and the app store offers little more that will significantly enhance your productivity on your wrist. Prepare to whip out the cell phone for tasks that you would have been able to do on your wrist with the TicWatch Pro. 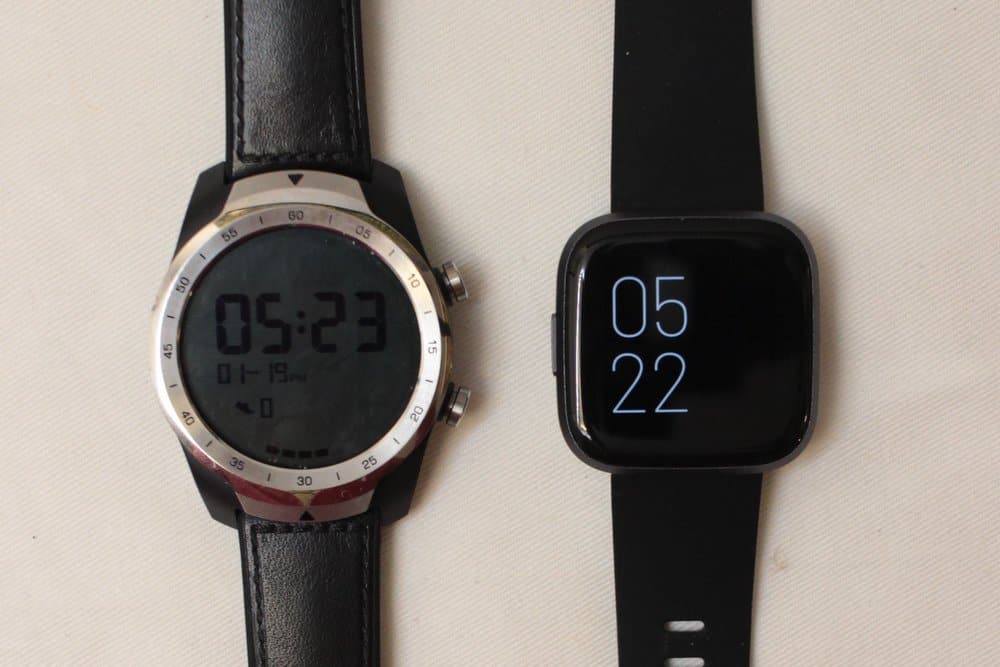 The battery life for both watches are excellent with the Fitbit deserving extra commendation.

The TicWatch Pro uses a very innovative dual-layer display where they have a full-colour AMOLED screen and a black-and-white LCD screen on top of that. The LCD screen performs very well even in bright sun and this is particularly exciting because most always-on screens do not do well in these situations.

Most importantly, the battery life is greatly extended as a result of this innovation. Mobvoi, the makers of the TicWatch, promise five days of battery life (two days in smart mode and three days in battery saver mode), and in my tests, the two day smart mode promise is possible.

The Versa 2 is even better. Its battery will take you at least two days even in always-on mode. It’s pretty impressive given that the watch is much lighter and smaller than the TicWatch Pro.

Fitbit promises six days of battery life, and while that’s possible, it also requires you to be conservative about use. 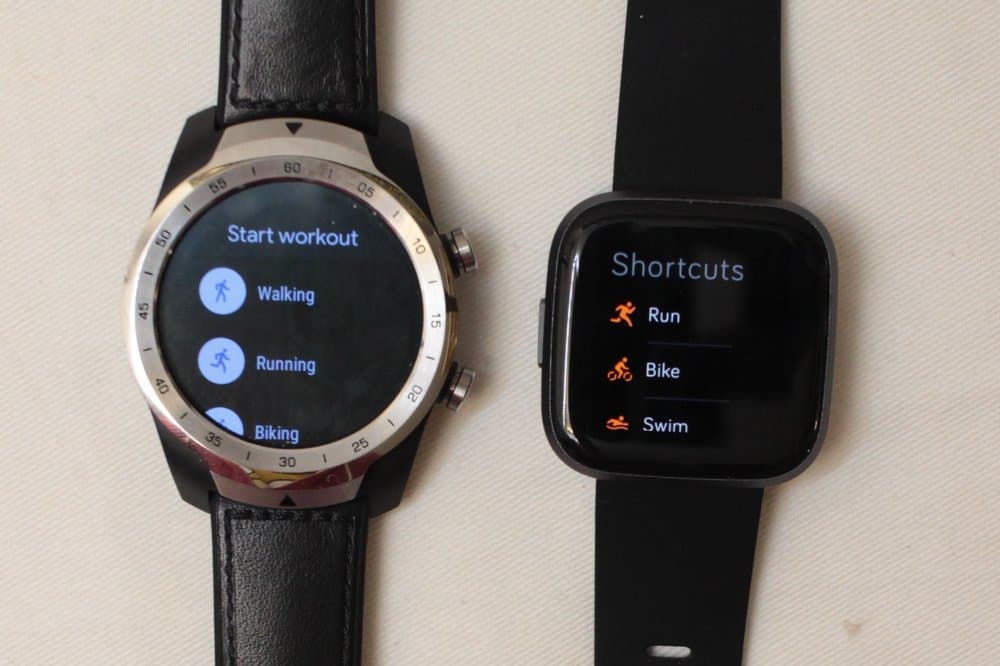 The Fitbit Versa 2 leaves the TicWatch Pro in the dust in this regard, except in one area — integrated GPS.

The Fitbit Versa 2 would be complete if it had an integrated GPS. It doesn’t, and that implies that if you want any GPS data, you will have to bring your smartphone around. If you find this to be a bit of an inconvenience, then consider the TicWatch Pro.

The Fitbit Versa 2 comes out on top in this domain. In addition to having simple to navigate Exercise app with most common workouts, it also integrates fantastically with the Fitbit app.

In fact, the Fitbit also has a SmartTrack feature that will keep track of spontaneous exercise. Any movement that is longer by 15 minutes will be recorded which is good if you sometimes forget to activate the exercise tracking.

A quick glance at the overall workouts you’ve done and you’ll be able to tell how much exercise you’ve done and at what intensity. It’s fantastic for data-driven folks like myself.

The TicWatch’s Wear OS just does not compare to the Fitbit Versa 2. Whereas the Fitbit app is a one-stop app for everything, on a Wear OS watch, you have to have both Google Fit and the Wear OS app — two apps — to get the same functionality.

While Google Fit manages to adequately track your stats, information is less detailed as compared to Fitbit. In addition, I wore the Fitbit to sleep one night, hoping that it would automatically log my sleep data, and the TicWatch Pro to sleep on another night and the former managed to log my sleep data whereas the latter did not.

Mobvoi does not state that the TicWatch Pro is swimproof. It has an IP68 dust and water protection rating, but unlike Fitbit, it does not explicitly state that you can take it into the water.

On the TicWatch, Google Fit (workout app) doesn’t have swimming as a workout choice, whereas on the Fitbit Versa 2, swimming is a workout by default in its Exercise app.

The Fitbit is a superior watch for people who want a fitness-first watch and one that is light, swim-proof and wearable all day. The Fitbit Versa 2 is also a bit cheaper than the TicWatch Pro.

The TicWatch Pro is a great productivity watch which you can use for calling on your wrist, it also has an integrated GPS and is much better as a productivity tool because of its superior Google Assistant and access to many Google apps.