Skip to Content
Two compact and mass-market smartwatches go head-to-head. The Ticwatch C2 and Fitbit Versa 2 have different approaches to achieving this goal. 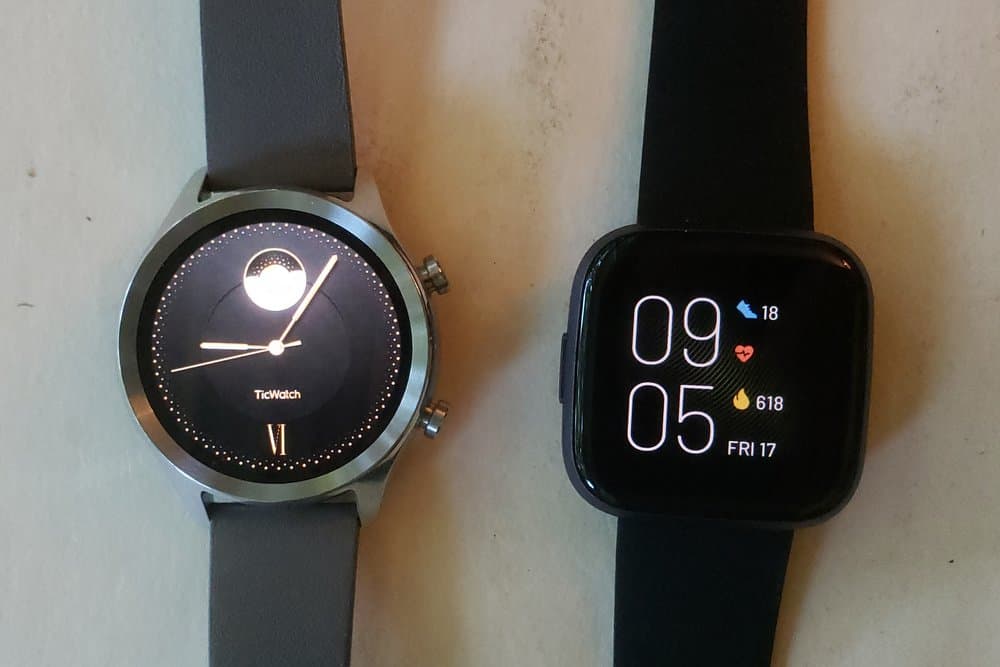 Here are two petite smartwatches which appeal to the mass market.

The Fitbit Versa 2, more or less, is a watch that’s meant for the sportier segment of the mass market, whereas the Ticwatch C2 is marketed to appeal to everyone who isn’t looking to do heavy-duty sports with it.

TIcwatch’s creators, Mobvoi, has already segmented the sporty people with their E2 and S2 variants of the Ticwatch line of smartwatches. Under the hood, though, the C2 does share many similarities with those siblings so has many of the advantages offered by them.

Compared to whatever Ticwatch can offer, though, Fitbit goes its own way with its Fitbit OS watch which means that it has some advantages over Mobvoi’s C2 as well as some distinct disadvantages. 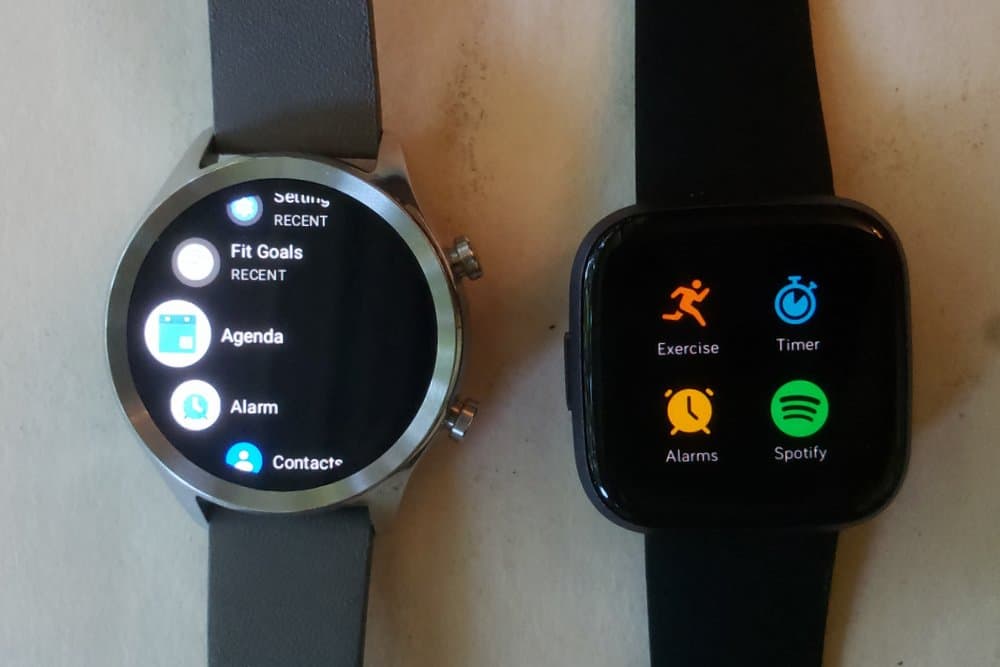 The Ticwatch C2, in my opinion, is a better daily watch because it comes with the Wear OS system made by Google.

The Fitbit OS tries to be good at daily tasks but it is just not that dynamic and able like the Wear OS is.

But I find the Fitbit OS to be much more attractive in design, font and the way you’d interact with it.

The Fitbit Versa 2 has a very modern look. A curved-edge screen just like you’d see on flagship Samsung phones. The sans serif font on the Fitbit OS also looks more modern and calmer, but this is me nitpicking.

The Ticwatch C2’s Wear OS is more utilitarian, and it really shows when you look at the way it’s designed. The font reminds me of Arial (or is it actually Arial?) and things are not as beautifully laid out as the Fitbit Versa 2.

However, I find the Wear OS to be better integrated into its smartphone Wear OS app than the Fitbit Versa 2 with its smartphone Fitbit app. On the Wear OS, I can reliably expect its functions to work smoothly whether it be Google Assistant or receiving texts and emails.

With the Fitbit OS, though, sometimes things just don’t work. Most of the time the connection between the Fitbit app and the Versa 2 is OK, but sometimes, the two just won’t sync. It’s highly annoying when that happens because there’s no obvious way to troubleshoot it. 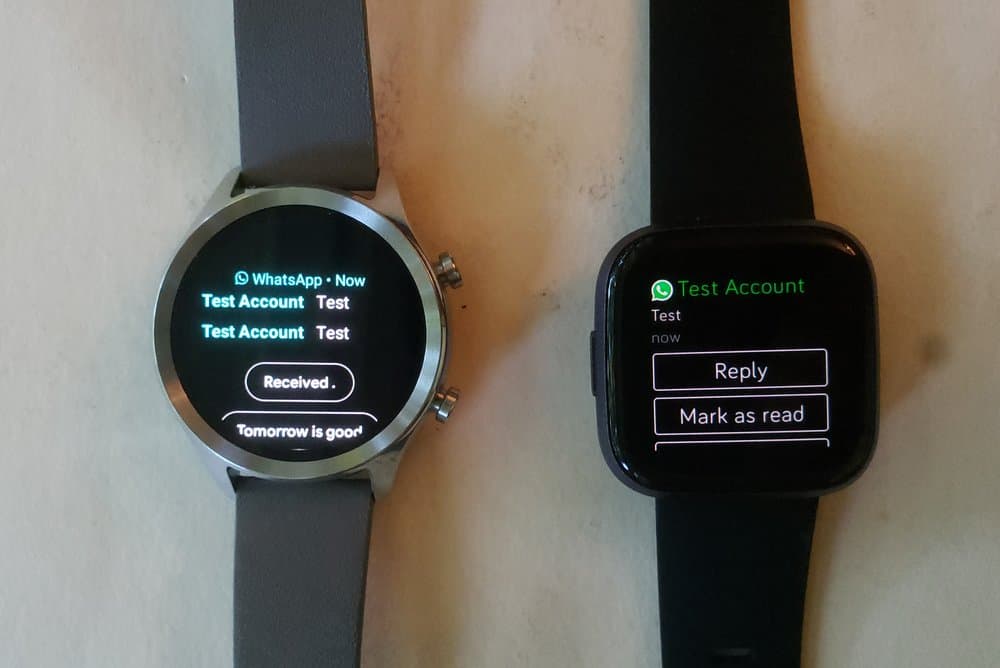 Both smartwatches allow you to receive texts and emails through notifications on your phone. You can also read a snippet on both watches and reply to them as long as you are paired to an Android phone.

In other words, no luck replying if you are paired to an iPhone. 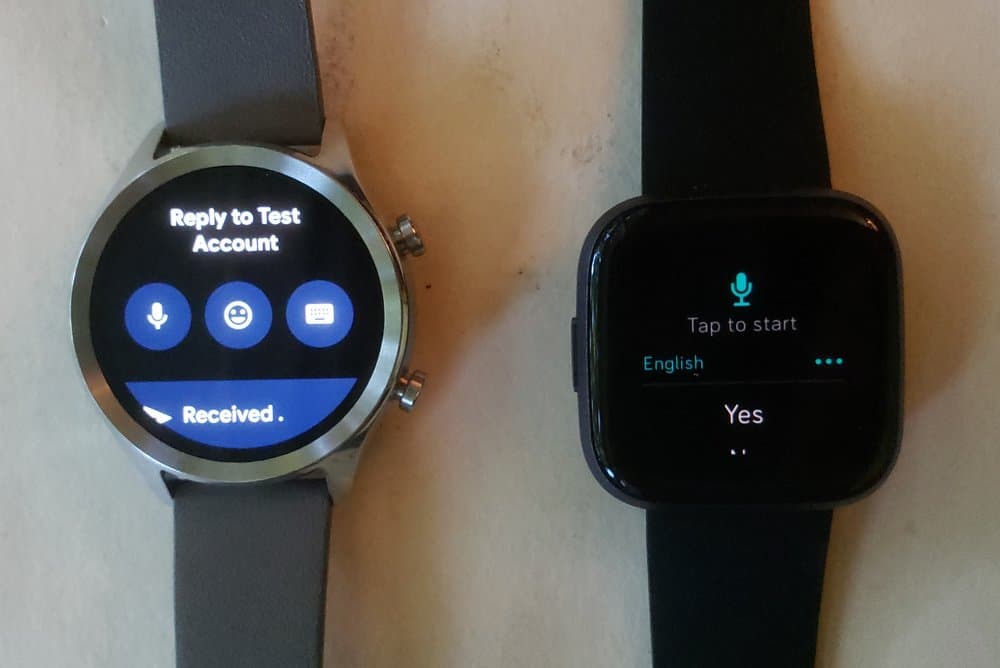 On the Fitbit Versa 2, you can only use the speech-to-text function to reply to a message. Accuracy of the transcription is good and it’s mostly usable for short custom messages. You can also reply with a bunch of pre-composed messages and emoticons.

So what do you do if you are in a quiet environment where you can’t speak? Well, if you had a Ticwatch C2, not only could you use the speech-to-text function, you could also use the 26-alphabet keyboard or hand write letters to form words.

More variety is better right? Therefore the Ticwatch C2 is a better choice in this regard.

I suspect that this has something to do with the vibrancy of the Google Play Store which is the app store on the Ticwatch C2.

There are many apps on that app store that will enhance your productivity such as shopping lists, games, Google Maps, Google Keep and Google Translate. Having such an extensive app store will help you do more without having to find your smartphone which is a great convenience.

The Fitbit’s app store has seemed to improve over time but it still is not as good as the Ticwatch C2’s app store.

I liked how I can play Flappy (Bird) on the Versa 2, there’s also a Starbucks card app and a Uber app. But when it comes to utility, the smaller variety on the Fitbit app store leaves a lot to be desired.

So, if you want a smartwatch with a wider range of apps to choose from, go with the Ticwatch C2. 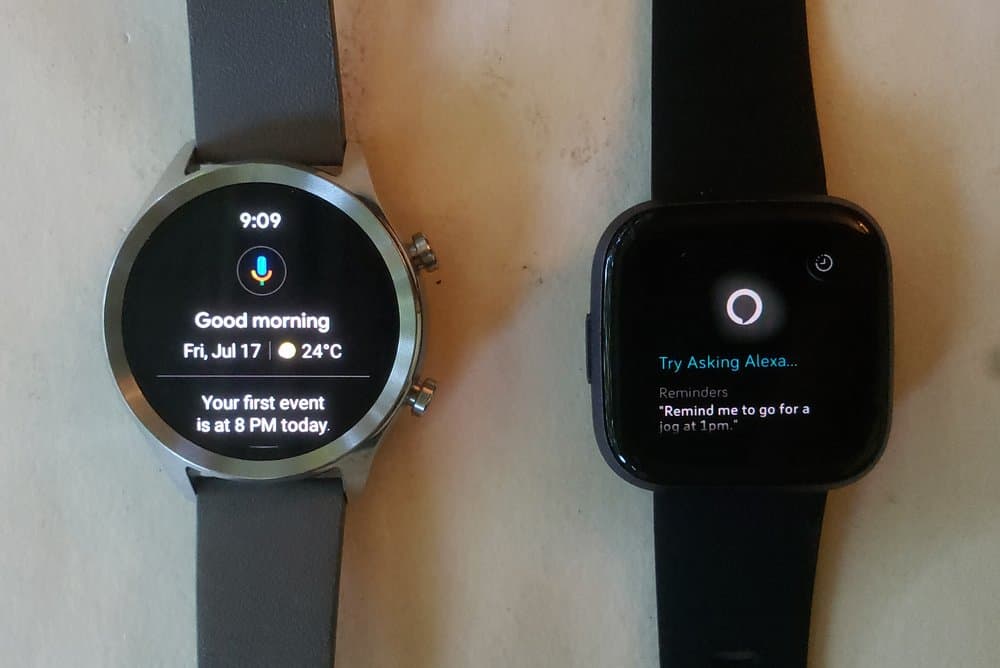 Voice assistants are the most revolutionary time savers on smart devices. I really love them.

With a smartwatch, you won’t need to shout across the room to get Alexa or Google Home to pay attention.

They’re now on your wrist, ready to give you directions, weather and start timers.

Google Assistant is superior, though, with more capabilities than Alexa. For example, if you need directions to a grocery store, Google Assistant will be able to tell you where the store is and also give you directions with Google Maps.

Alexa will also be able to help you with this query, but the information it offers is a lot more rudimentary. It’s just a list of grocery stores and how far away they are.

Alexa suffers from more problems with connectivity with my smartphone which can be very annoying. For a while, Alexa couldn’t find my location despite being paired to my smartphone. It wasn’t until I opened up the Fitbit app on my Samsung Note 9 that it managed to get my location. It still managed to answer my query about the weather, but gave me weather in Wilmington, Ohio, while I lived up here in Canada. 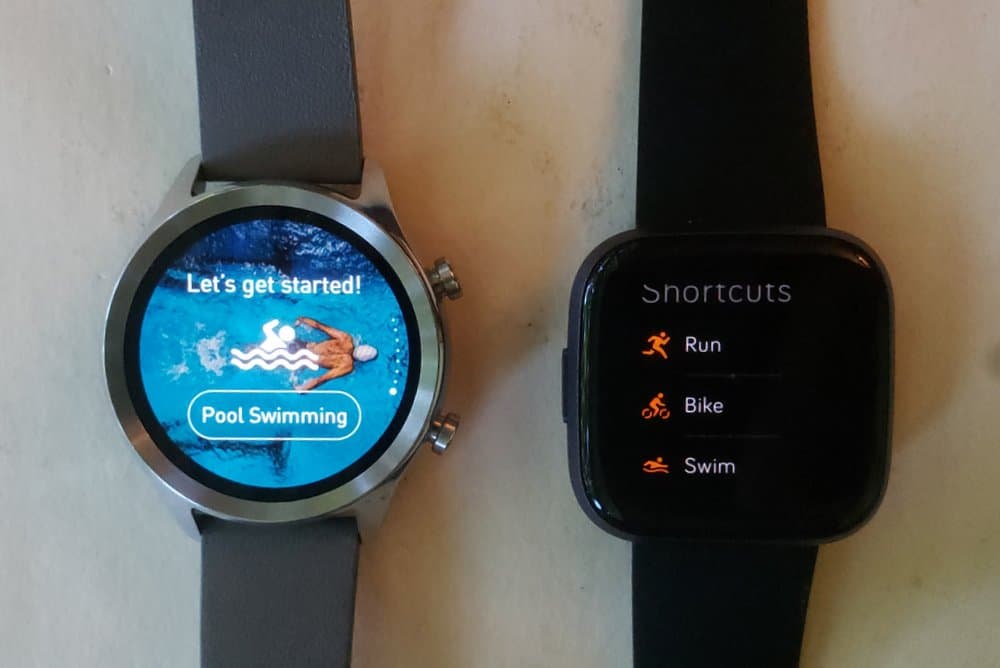 The Fitbit Versa 2 is supposed to be better than the Ticwatch C2 but it just has one big problem: it doesn’t have an integrated GPS.

That means if you want to track your workout, you will need to carry your smartphone around with you if you want location data. All the time.

The Ticwatch C2 has an integrated GPS, but it not only is a battery hog, it also takes a few minutes to get a GPS lock. You can also use your phone’s GPS if you plan to bring your phone on your workout.

But Fitbit redeems itself because it is superior in almost every other way in the domain of sports. 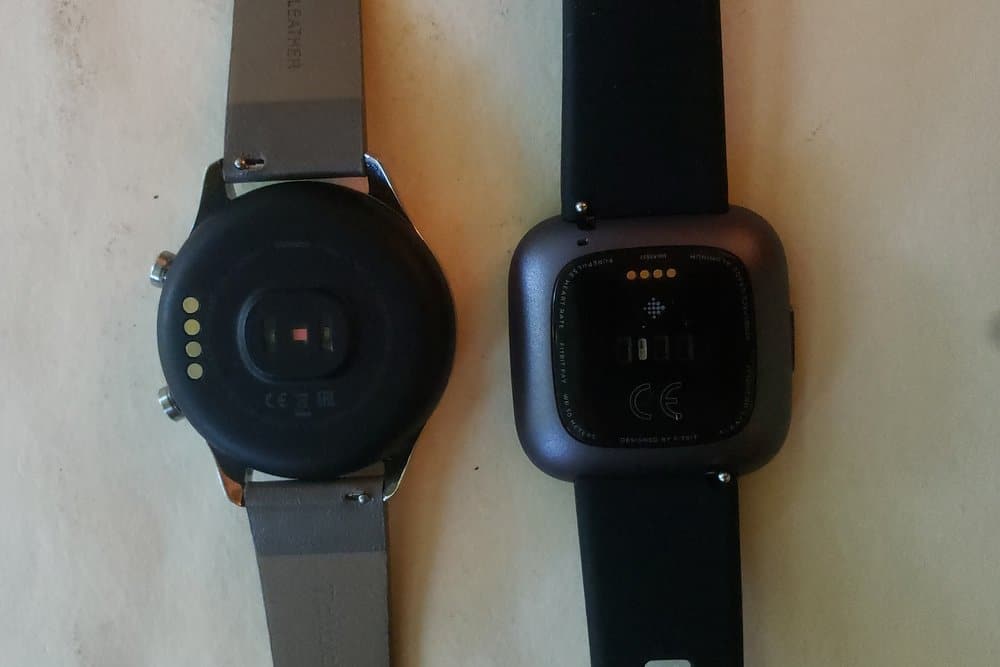 Both smartwatches are waterproof for swimming so you can take them into the water. Mobvoi says you should change out the Ticwatch C2’s strap before you do that, though, so prepare for an extra bit of hassle.

Where they differ is that the Ticwatch C2 does not track sleep while the Fitbit Versa 2 does. That’s a really great feature and I like how wearing the watch gives you better insight into the quality of your sleep. The Fitbit gives you good insight into your sleeping patterns. 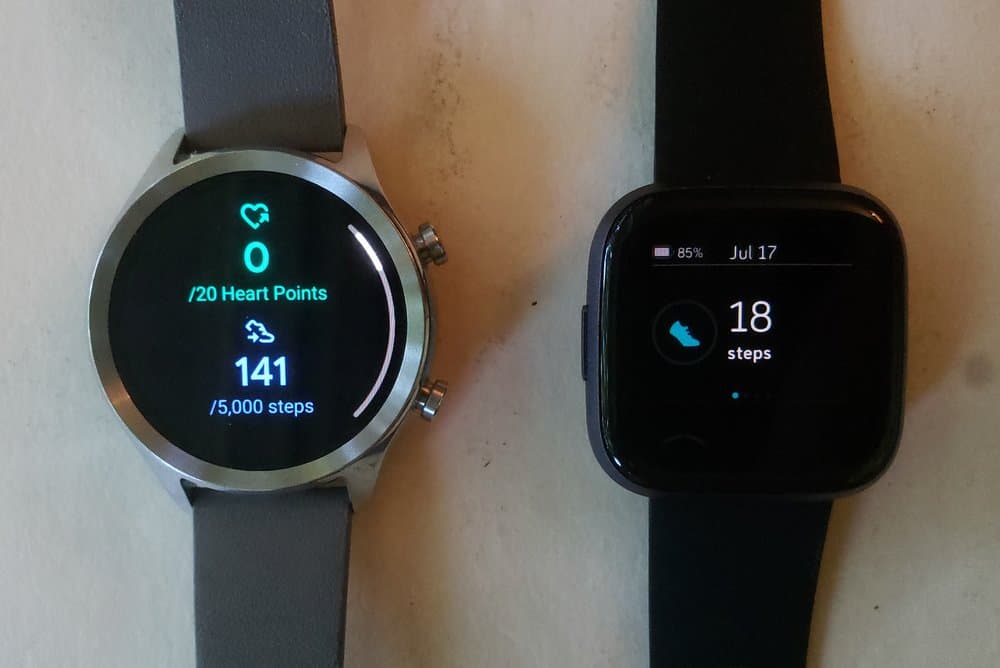 The Fitbit smartphone app is a lot more comprehensive too. It has a calorie counter, exercise programs and other health-related functions. The Ticwatch C2’s two app suites definitely do not have calorie counters nor exercise routine programs.

The one caveat is that Fitbit locks many features unless you subscribe to Fitbit Premium which unlocks all the stats and analysis available from the smartwatch as well as exercise programs on the app. 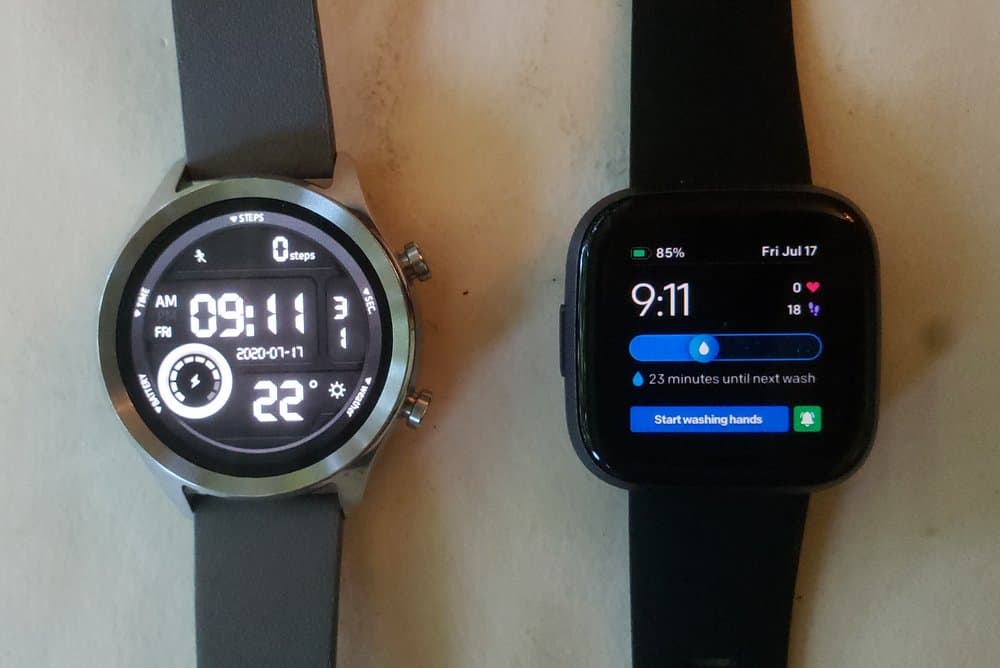 Looks matter and I really prefer having the slim, modern looking Fitbit Versa 2 on my wrist.

Ultimately, I am also looking for functionality. I wouldn’t say that the Fitbit Versa 2 sucks in its functionality, because it does really shine in helping you improve your health and workouts, but it’s really not comparable with the Ticwatch C2 in dynamism.

The question now is… what are your priorities?