Skip to Content
Are you a sportsperson who needs a watch that is hardy, utilitarian and brings you conveniences? Then prepare to have a dilemma between these two watches. 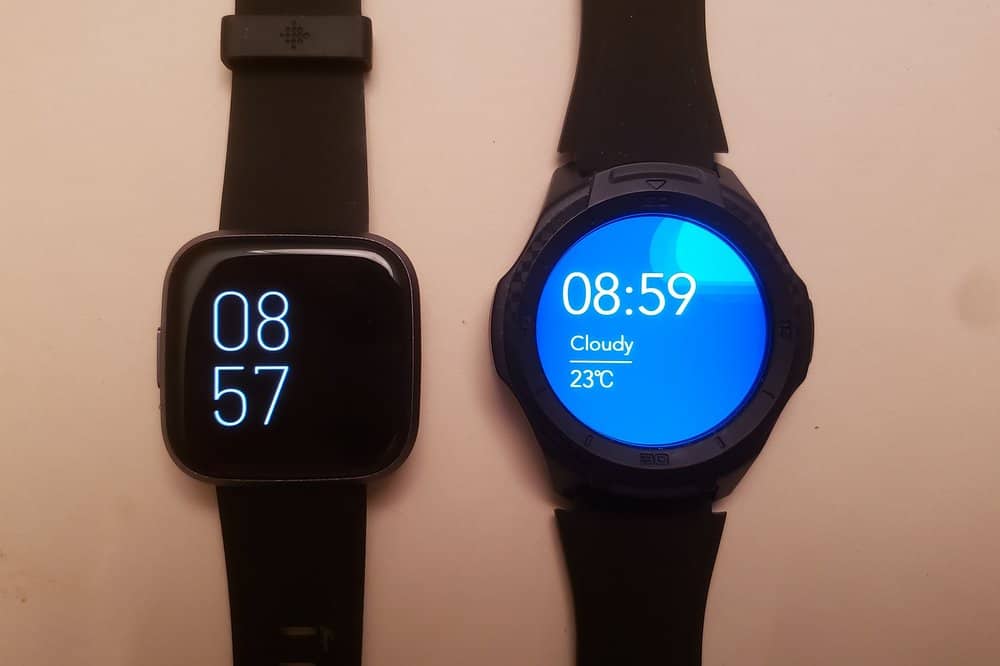 Mobvoi’s Ticwatch S2 is marketed as a hardy smartwatch meant for outdoorspeople who want to do sports like mountaineering and surfing. It’s pretty hardcore. The Ticwatch S2 also comes with a very attractive entry-level price.

At the same time, the Fitbit Versa 2 is a modern-looking, sports-oriented smartwatch. It has beautifully rounded edges on the watch case and a curved-glass screen that is a big selling feature on high-end Samsung smartphones.

So here we have two smartwatches that say they’re meant for the sportsperson. I guess the question is whether there’s a noticeable difference between the two and who would benefit more from it.

Immediately obvious is the difference in size between the two watches.

The Ticwatch S2 is a much thicker and bigger watch than the Fitbit Versa 2. It has a bezel with a display recessed into it. The Fitbit Versa 2 is much flatter in design and is smaller.

Both watches come with a silicone strap with a universal 22mm quick release. That’s great if you decide that you don’t like the strap that it comes with.

I particularly didn’t like the TIcwatch S2’s strap. It is very thick and therefore props my wrist up at an angle that makes it uncomfortable when typing.

The Fitbit Versa 2 was also less noticeable when wearing as a result of it being more comfortable to wear.

Software presents a major difference between the two platforms,

Fitbit comes with the Fitbit OS while the Ticwatch S2 uses the more commonplace Wear OS by Google.

Each has their own advantages. The Wear OS is a much more dynamic and multipurpose operating system that is better for day-to-day functionality while the Fitbit OS has better sports functionality preloaded. 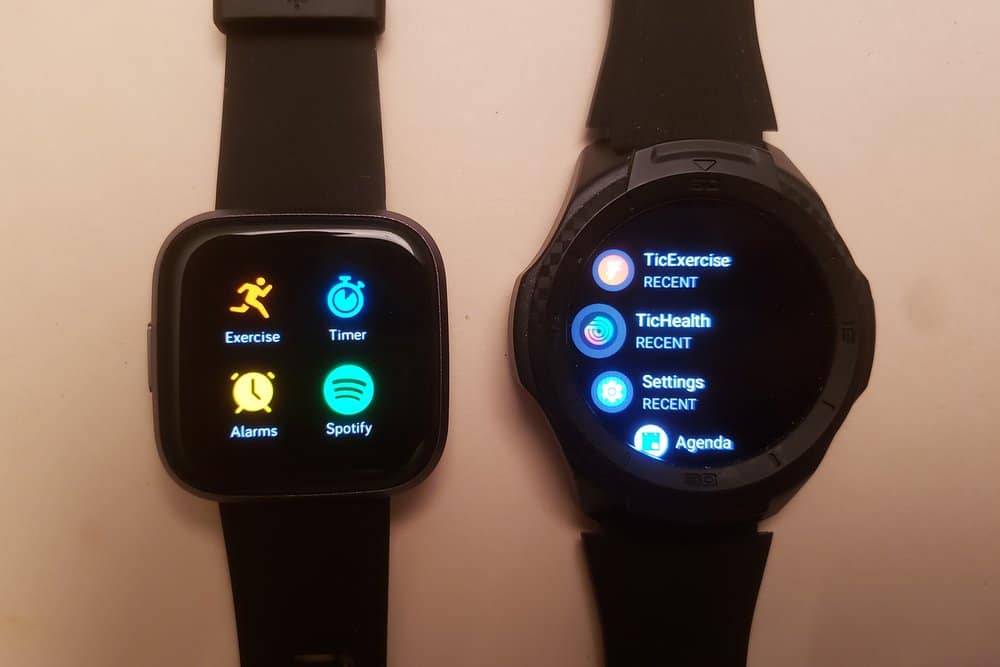 The Wear OS has many, many more apps as compared to the Fitbit OS.

This means that on the Ticwatch S2, you can download various apps that are not available on the Fitbit OS including Google Maps, Google Keep and Translate.

Google Maps is especially useful if you are navigating in a place you’re unfamiliar with and where it’s inconvenient to pull your smartphone out, such as when you are cycling.

Fitbit’s store has a very limited selection. I did not see any apps that would enhance the smartwatch’s utility.

COVID-19 has really spurred the adoption of contactless payment but only the Fitbit Versa 2 has NFC and you can use its Wallet app to pay for your purchases. The Ticwatch S2 does not have Google Pay. 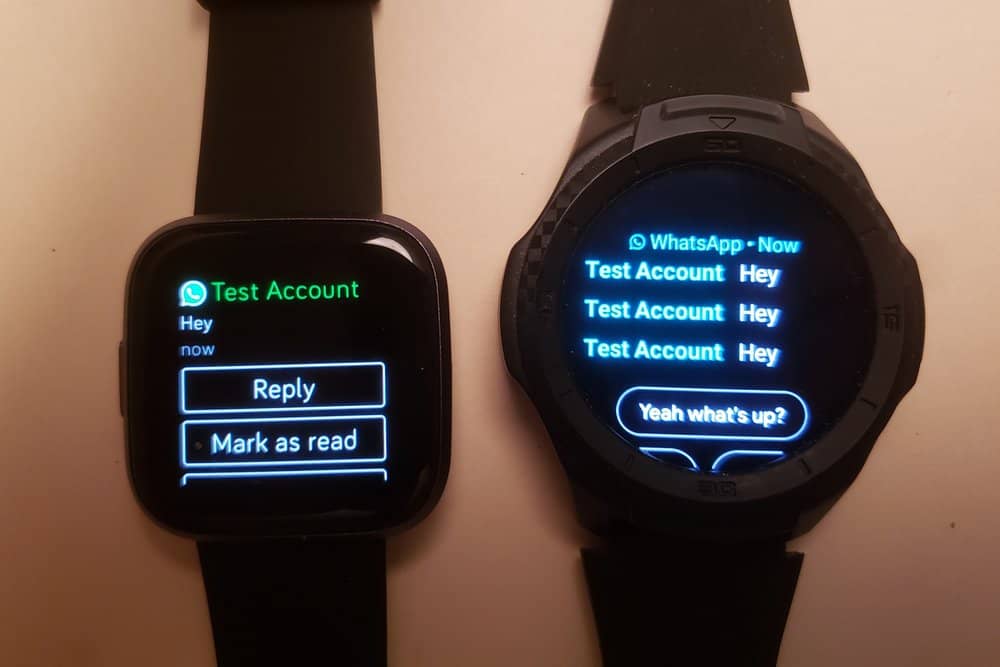 Both the Fitbit Versa 2 and the Ticwatch S2 are able to read and reply to messages whether it’s SMS or Facebook Messenger. Just note that the reply function is not possible on an iPhone.

However, it seems that on the Fitbit, I was not able to reply to my emails. Whereas on the Ticwatch S2, I could reply to them.

Replying to these emails and messages are done through the speech-to-text system, by using an emoji or by using a precomposed reply. 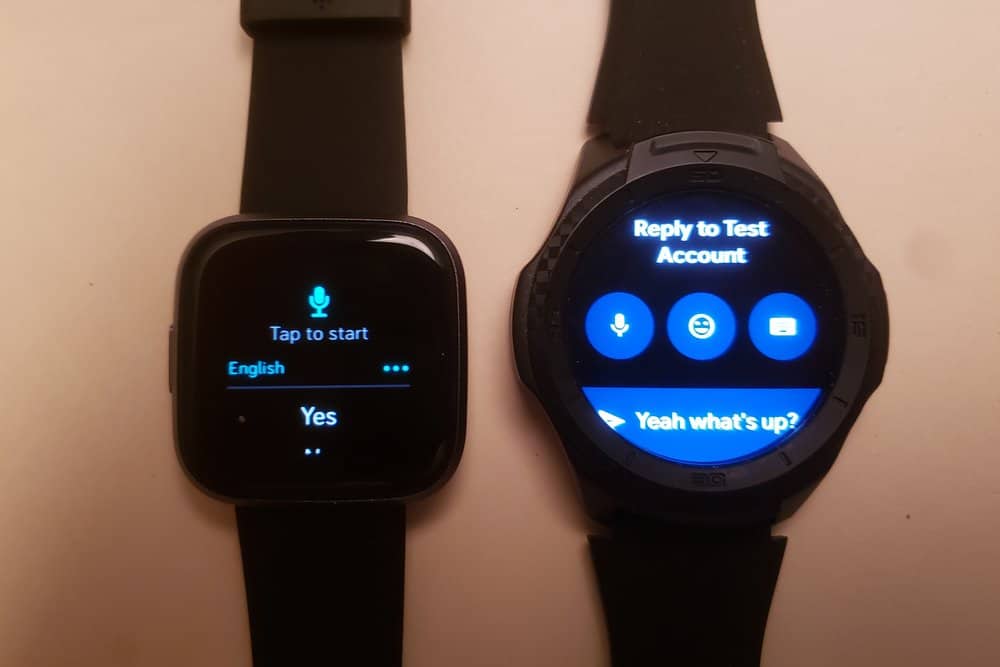 The Ticwatch S2 has the additional input options of handwriting or using a 26-alphabet keyboard to input text. This is an advantage the Ticwatch S2 has over the Fitbit Versa 2 because sometimes you can’t speak out loud and need these options.

The speech-to-text system remains my preferred method of text input because it’s fast and efficient. Both the Fitbit Versa 2 and Ticwatch S2 work well in this regard although I do have a preference for the Wear OS’s transcriber because it is a bit more accurate. 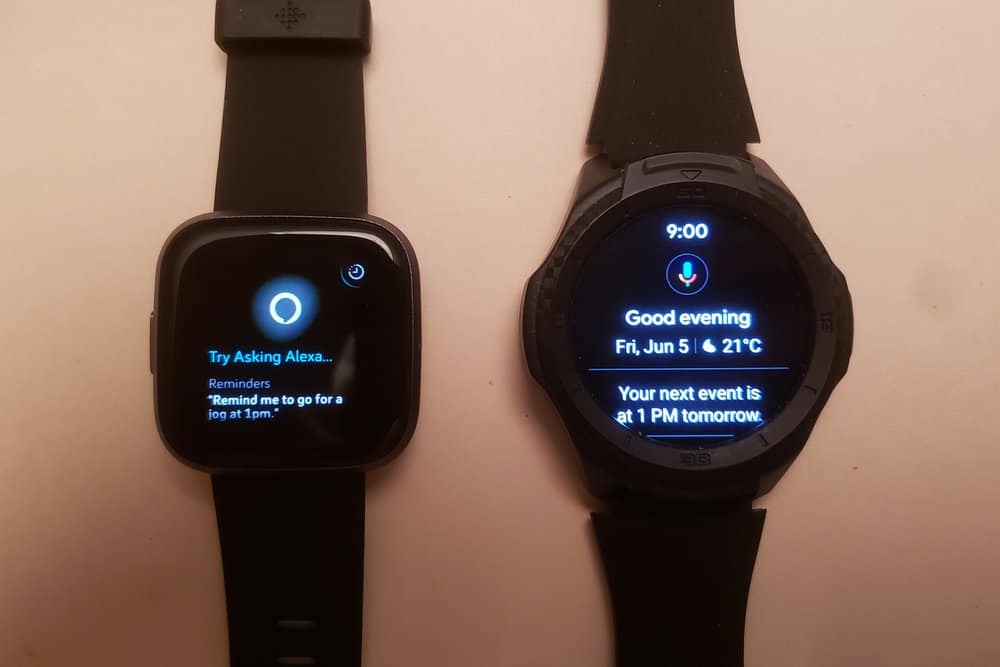 The Ticwatch S2 comes with Google Assistant while the Fitbit Versa 2 comes with Amazon’s Alexa.

Google Assistant is superior to Alexa because it is more dynamic and less problematic. Both systems are able to tackle simple tasks like start a timer or tell you the weather.

But the syncing between the smartphone and smartwatch is a bit lacklustre on the Fitbit, so sometimes Alexa will complain that it doesn’t have your location, or that it has lost connection to your phone. Other times, it gives you weather in Wilmington, Ohio when you’re actually in Toronto, Canada. 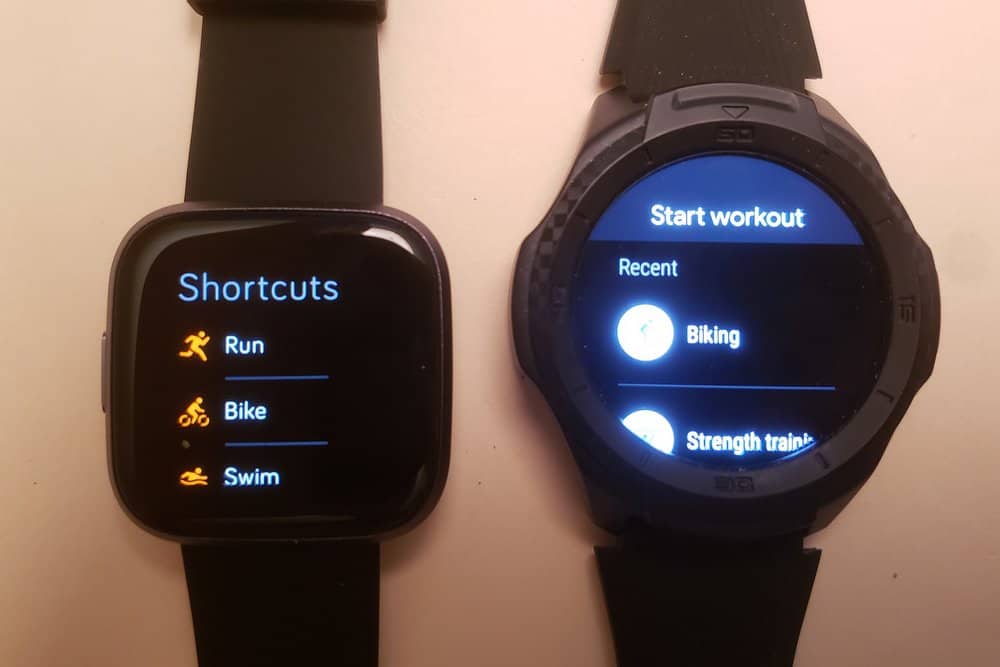 Let’s start with hardware as it relates to sports capabilities.

I’d have to say the Ticwatch S2 is superior. It has an integrated GPS, waterproofing for the pool and a US Military 810G durability rating.

The Fitbit Versa 2 doesn’t have any of the above except waterproofing. That means that if you want location data on your exercise, you will have to bring your phone with you. With the S2, you won’t.

Having a recessed screen on the Ticwatch S2 also increases durability since it won’t be the first surface to receive an impact as compared to the Fitbit Versa 2.

Software-wise, the Fitbit Versa 2 is superior. Software is particularly important because it interprets raw data and gives you analytics that will inform you about your workout, sleep and other aspects. 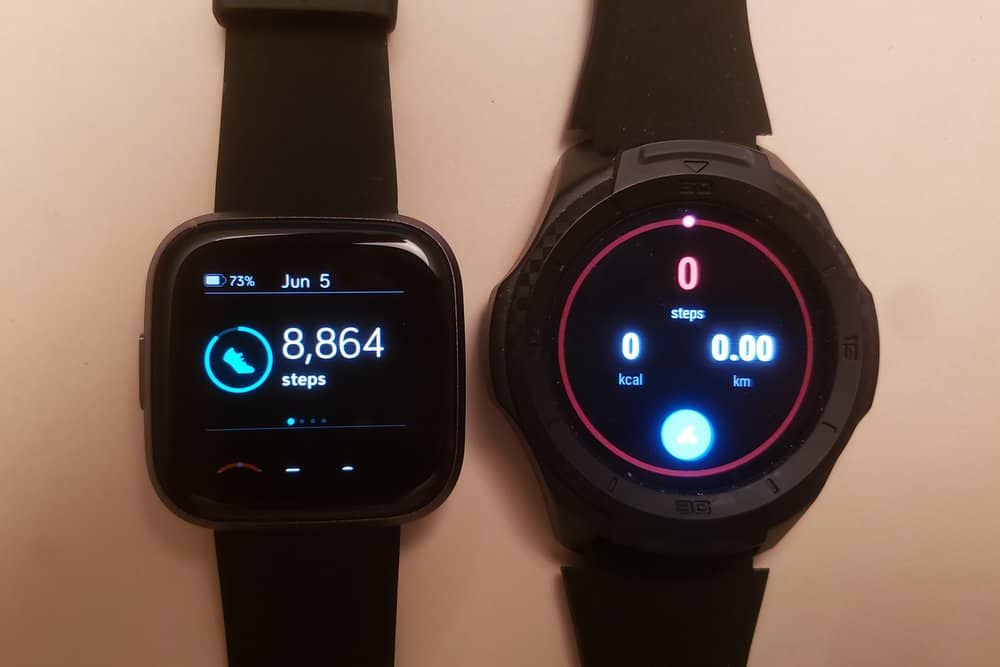 Immediately, the Fitbit smartphone app scores a win in this regard. The Ticwatch S2 does not track sleep while the Fitbit Versa 2 does natively. In fact, I really like the design and interpretation of your sleep phases on the Fitbit app.

Both watches have a step counter, exercise app to track your workout and a breathing app.

The Ticwatch S2 comes with two suites of workout trackers, Google Fit and Mobvoi’s TicHealth/TicPulse/TicExercise. This is confusing since the two suites overlap each other and offer little advantages over each other.

Basically, if you want to track your workouts, use either one. Google Fit provides better longevity since it’s universal across any Wear OS smartwatch.

The one advantage of having the TicExercise app is how it has a Pool Swim app. This is not available on typical Wear OS smartwatches.

The Fitbit Versa 2 offers a much more elegant solution through its Exercise app, which has all the typical exercises including swimming, running and cycling.

Another strength of the Fitbit Versa 2 is its smartphone app. The app has guided programs that you can follow along with, a nutrition counter and a social media function where you can share your latest health-related developments with other Fitbit users.

Just note that a noticeable portion of Fitbit’s app is paywalled behind a Premium subscription, so you will have to pay a monthly fee in order to get advanced analytics and most guided programs. 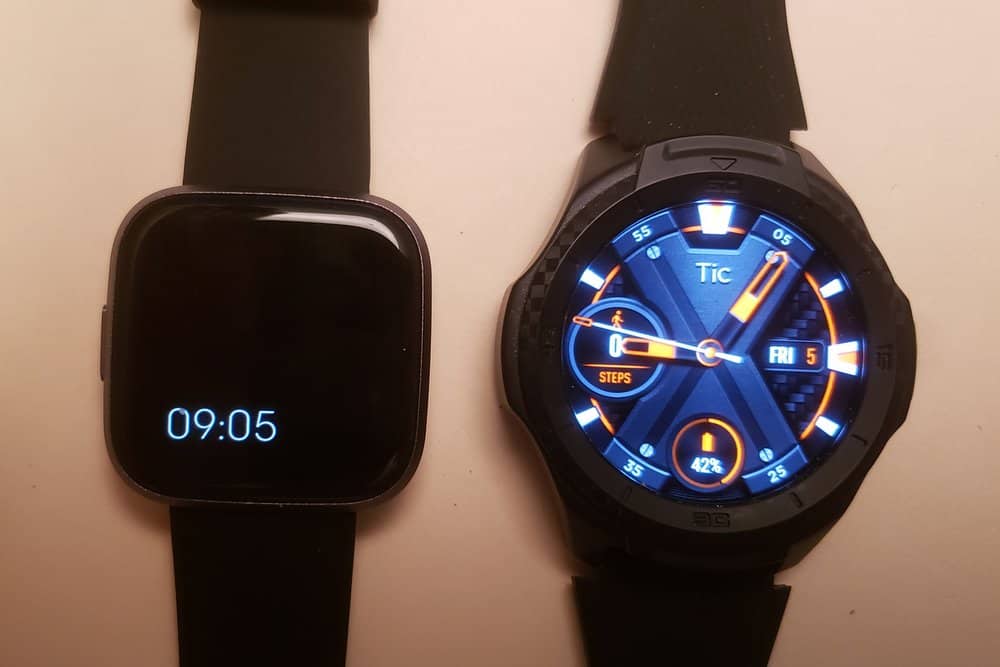 If you are looking to improve your health and lifestyle, get the Versa 2 because it has better features.

If you want to reduce the number of times you have to hunt for your smartphone in order to reply to emails or use Google Maps, then the Ticwatch S2 is the smartwatch for you.