Skip to Content
One's slim, one's thick. One's round, the other has rounded edges. Both market themselves as sports watches, but they really are for different people. 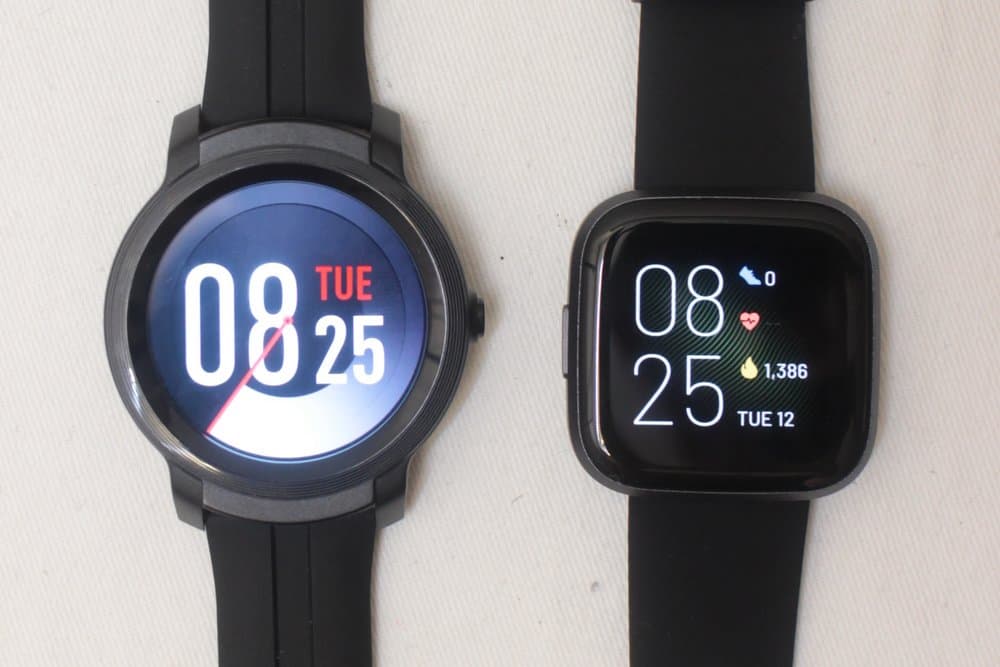 This is a great consumer-grade sports watch showdown.

The Ticwatch E2 markets itself as a watch that’s meant for sporty people — just look at their website which features a skateboarder and a swimmer.

Then we have the Fitbit. The brand already connotes a digital device (bit) that’s meant to keep you fit.

So now we have the Versa 2 versus the E2 — two cruiserweights on the line, vying to be on your wrist.

The biggest difference is where the two watches stand on the “purpose continuum”. On the one hand, we have the Ticwatch E2 positioned more towards the general-purpose end of this continuum, while the Fitbit Versa 2 tends to be a better sport-focused watch.

They’re nowhere the best at general-purpose or sports. The best general purpose watch is likely the Fossil Gen 5 series, Apple Watch or Samsung Galaxy watch. The best sports watch is either the flagship Polar or Garmin watch. To be fair, these top-of-the-line watches are often more expensive and sometimes require sacrificing features. 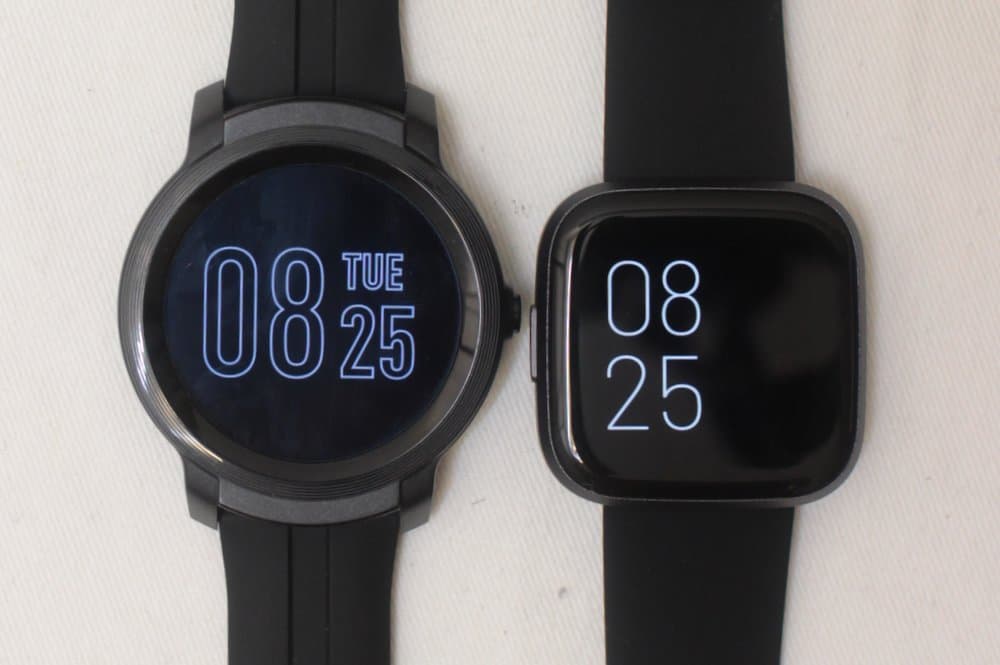 How is the Ticwatch E2 better at daily use?

The Ticwatch E2 comes with the Wear OS operating system while the Fitbit Versa 2 comes with Fitbit’s unique OS.

This has deep implications for apps, texting, emailing and voice assistant. 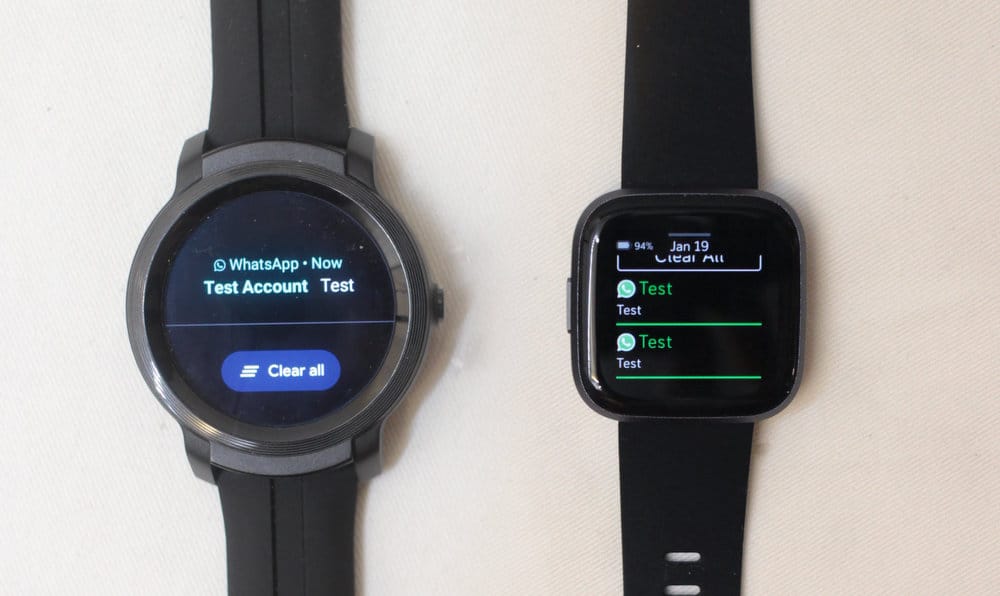 One of the best things about having a smartwatch on your wrist is the ability to avoid checking your phone in order to read and reply to texts and emails.

Both watches will be able to receive notifications whether you’re using an Android or iPhone. But you can’t reply if you are using an iPhone on either watch.

Paired to an Android phone, you will be able to reply to texts and emails through a number of ways.

The Wear OS offers more methods including its superior speech-to-text transcriber. This happens to be my favourite method of input because it’s fast, accurate and easy.

The Fitbit Versa 2 also has this function and it also works fine. In my experience, I do have a preference for the Wear OS’s transcriber because it’s a bit more accurate.

Otherwise, you can also reply using a pre-composed reply on both devices. But only on the Ticwatch E2 can you reply using a keyboard or by handwriting words.

The Ticwatch E2 is what kids these days call “thicc”, especially in comparison with the Fitbit Versa 2.

The Fitbit Versa 2 is slim, slender and streamlined. The Ticwatch E2 is like a Mack truck.

The Versa 2 has a modern design with a curved screen and rounded edges on its square display. The Ticwatch E2 has a thick bezel and a thick watch case.

Both watches are lightweight because of their plastic frames, but the Ticwatch E2’s plastic case is most apparent when you glide your thumb over it.

Nonetheless, I greatly appreciate lightweight watches. They require less strap tension to keep the watch from sliding all over your arm. 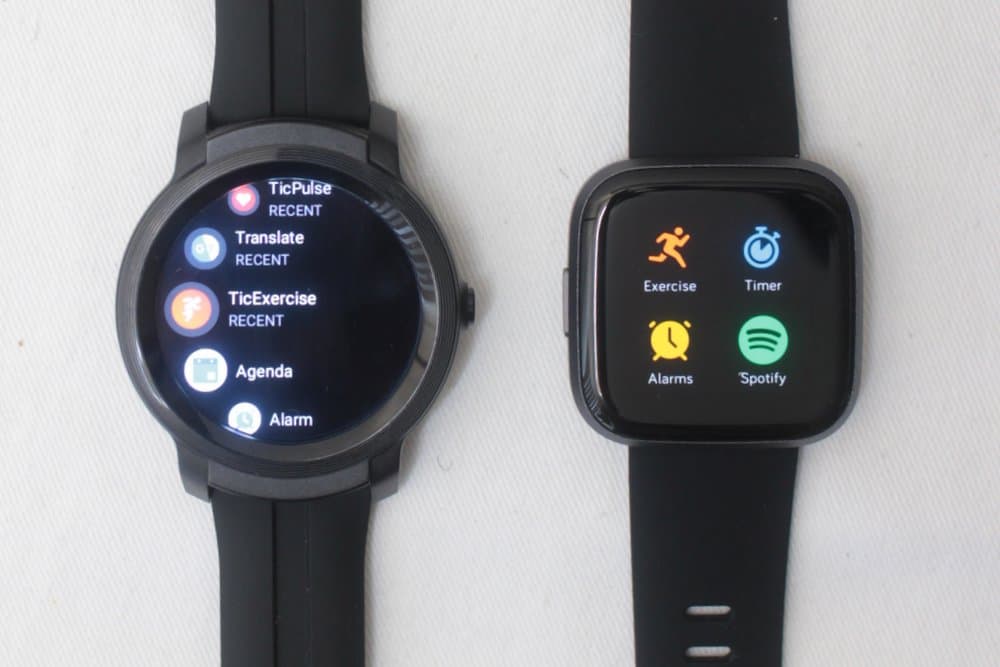 That’s what I have realized when I compare Wear OS watches to minor players from Fitbit, Polar, Garmin and even Samsung’s Tizen OS.

The app store on the Fitbit is terrible. There really aren’t many apps that will really extend your productivity. How about a Starbucks app? A United (airlines) app?

This extends to the custom watch faces that you can download. I tried downloading a few watch faces but all of them asked you to sign up in order to use it.

There’s no such hassle with the Ticwatch E2. The unique thing about Wear OS is that each manufacturer often has a few unique watch faces to choose from. For example, Fossil has some very expressive and beautiful watch faces.

Mobvoi, the makers of the Ticwatches, also have their own line of watch faces, but they tend towards utility and practicality. They aren’t very good looking.

But the good news is that the Google Play Store is full of good apps that can help you become more productive. The Ticwatch E2 has access to Google Keep, Maps and Translate as well as other apps that I like including a grocery list app which helps me from pulling out my phone only to find out I walked past the pasta aisle.

Did I also mention the Ticwatch E2 has a handwashing timer? 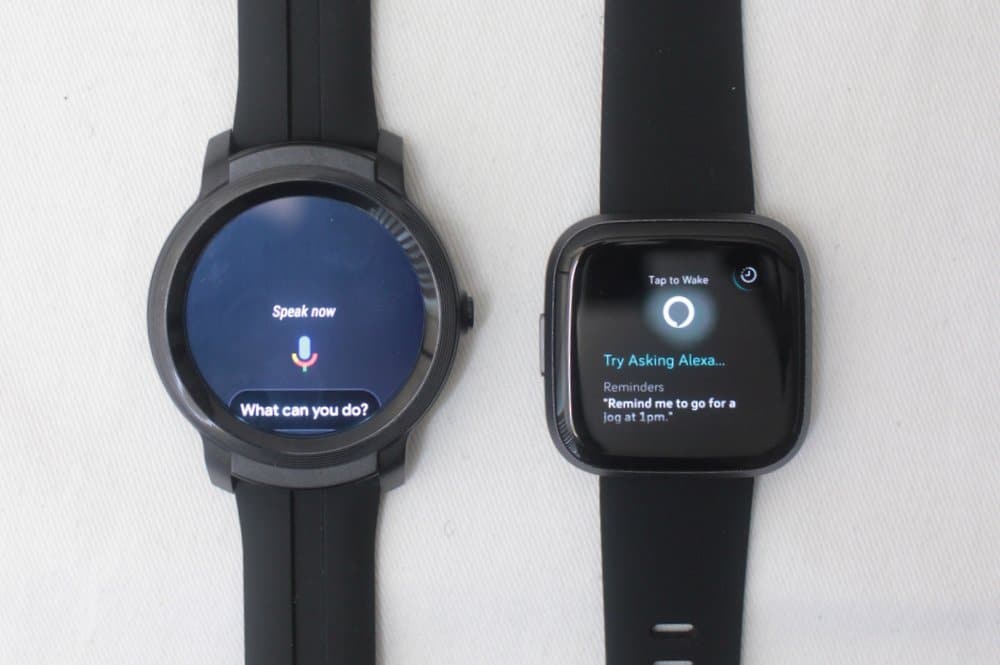 The Fitbit has Alexa integrated while the Ticwatch E2 has Google Assistant.

Both are great, but Google Assistant wins because it has far more capabilities. For example, if you wanted to find the closest pharmacy, Google Assistant will be able to advise you where they are and it can also help you navigate there.

Ask Alexa the same question and it will tell you how far away the pharmacy is, its address and its distance from you. There are no maps, though, so you’ll be referring to your phone for directions.

The Ticwatch E2 has about two days’ worth of battery life. The Fitbit will do at least two days and up to six days (according to Fitbit). 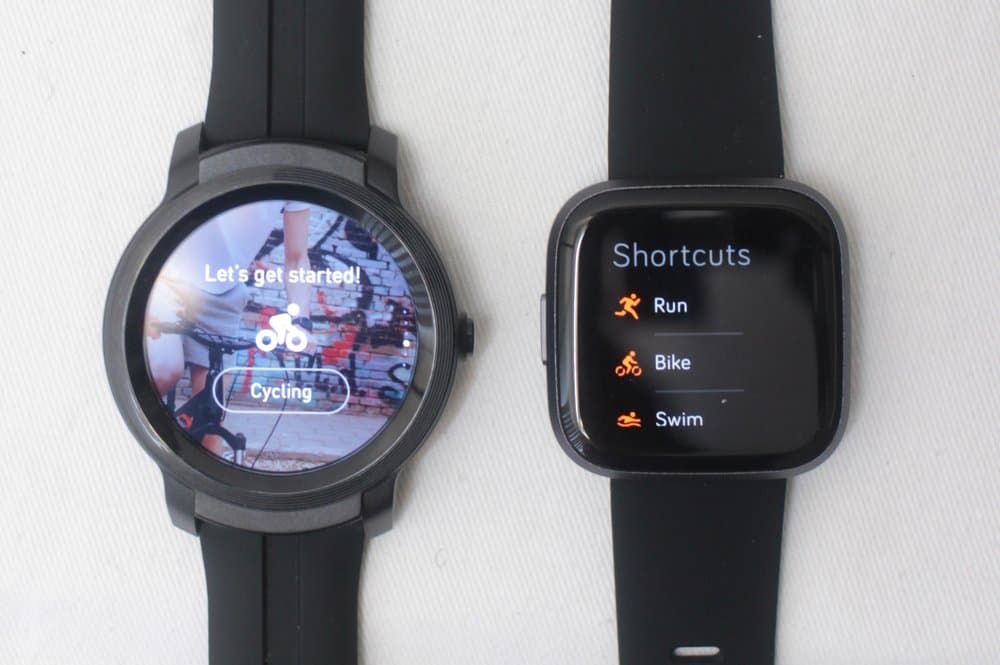 Sports is where the tables turn in favour of the Fitbit Versa 2, but before we go there, let me just note that the Ticwatch E2 has an integrated GPS while the Versa 2 does not. That means the Versa 2 will rely on your cellphone’s GPS for location data, which means that you’ll be carrying your phone with you on runs if you want any GPS data.

Ticwatches all have a unique set of sports and health apps from Mobvoi — TicHealth, TicPulse and TicExercise. They track metrics like step count, your heart rate, your exercise minutes and they also track different workouts such as running and swimming.

Mobvoi’s and Google’s smartphone apps can be used to review these details, but unlike Fitbit, they do not offer fitness programs, a social network or a calorie counter.

Fitbit also has a sleep tracker which the Ticwatch E2 does not, and to be honest, the Ticwatch E2 would be ghastly to wear overnight because of how uncomfortable it would be. The Fitbit Versa 2 has a low-profile, making it a bit more comfortable. 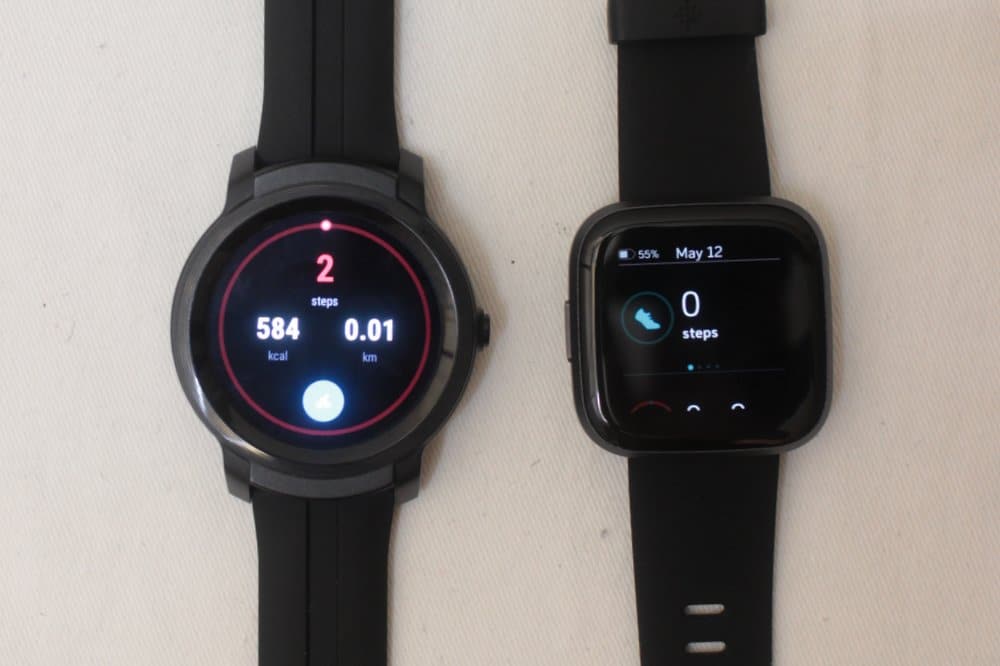 In essence, the Fitbit is a bit more comprehensive in helping you live a healthier lifestyle.

One caveat (emptor) here is that Fitbit locks a lot of its features. You’d have to pay a monthly subscription to Fitbit Premium in order to access these benefits.

Sports-oriented watches generally have a trade off and the Fitbit Versa 2 is no different. While it retains many useful productivity features, it suffers categorical defeat at the hands of the entry-level Ticwatch E2.

The Fitbit just can’t beat something that is so much more dynamic. The Ticwatch E2 is truly utilitarian and affordable.

Granted, the Fitbit is a lot better if you are seeking a watch to help you live a healthier lifestyle. By default, the Fitbit comes with features such as sleep tracking that would require a third-party app on the Wear OS.