Skip to Content
The Ticwatch S2 is an entry-level smartwatch made for the outdoors enthusiasts while the Fossil Gen 5 Carlyle is a premium, professional looking watch. 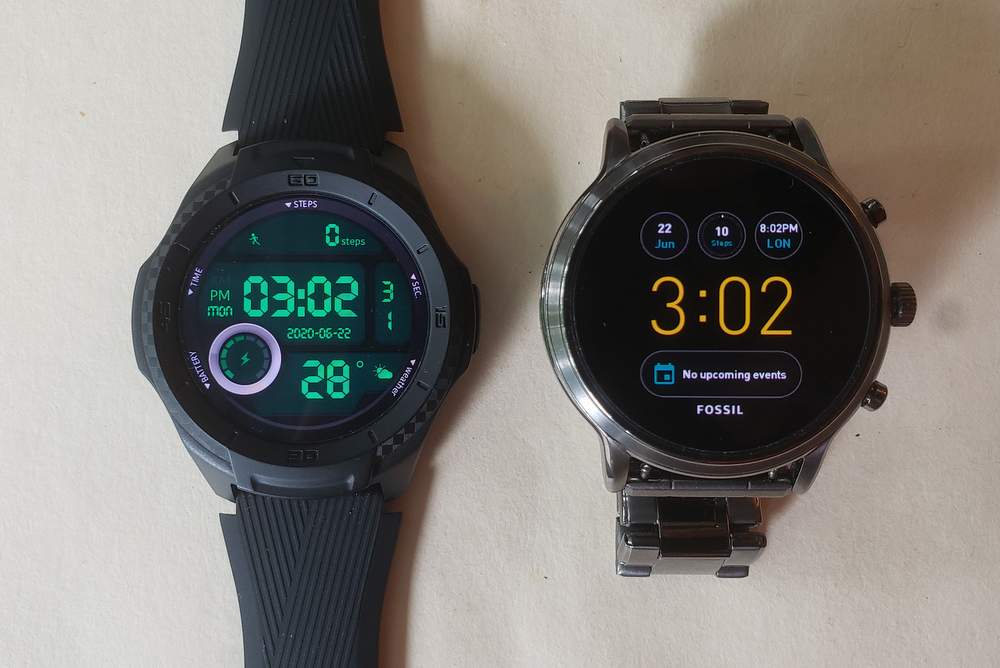 One can’t go wrong with the Ticwatch S2. It’s probably one of the best entry-level smartwatches out there.

But neither can you go wrong with the Fossil Gen 5 Carlyle. It’s probably the best Wear OS smartwatch out there.

The question is whether it’s worth spending the extra money to get the features of the Fossil Gen 5 Carlyle. The Carlyle definitely gives off the impression of being a premium watch. 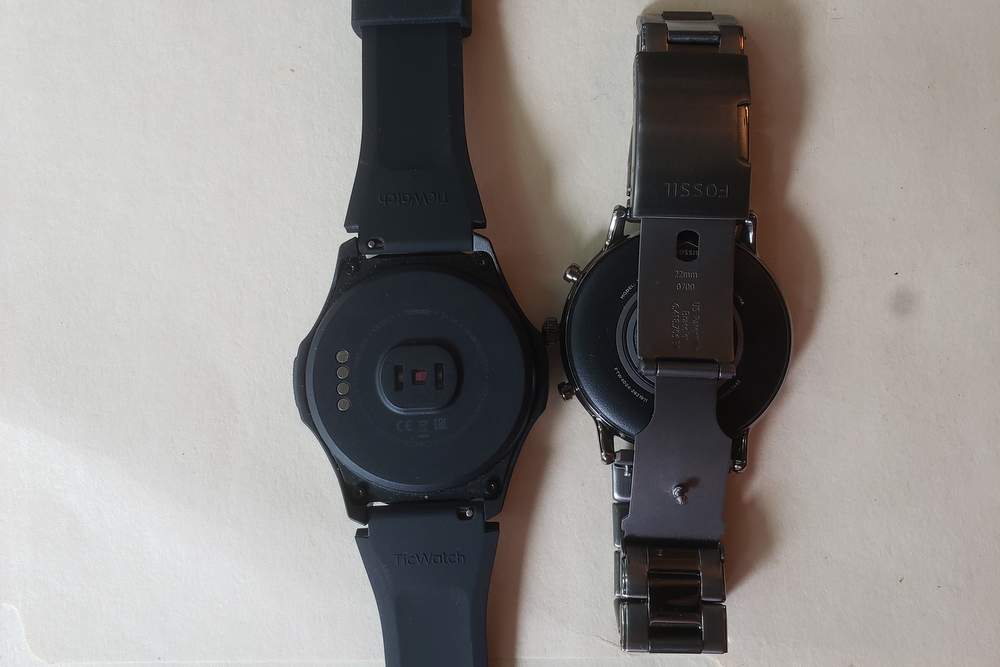 Strap vs band and clasp

The Carlyle is the only smartwatch that we’ve tested that has a metal band and clasp rather than the more typical strap.

I remember my first impression of the watch was how heavy it was. Over time, I found that its weight wasn’t that much of a bother.

The benefit is that once you’ve got the right length, getting the watch on can be done in a second. The downside is that if you misjudge the number of links to add or remove, it’s a bit of a pain

The S2 has a typical strap, made out of silicone. It is comfortable for daily wear but because it’s particularly thick, it can be rather uncomfortable when typing on a keyboard as it props your wrist up. 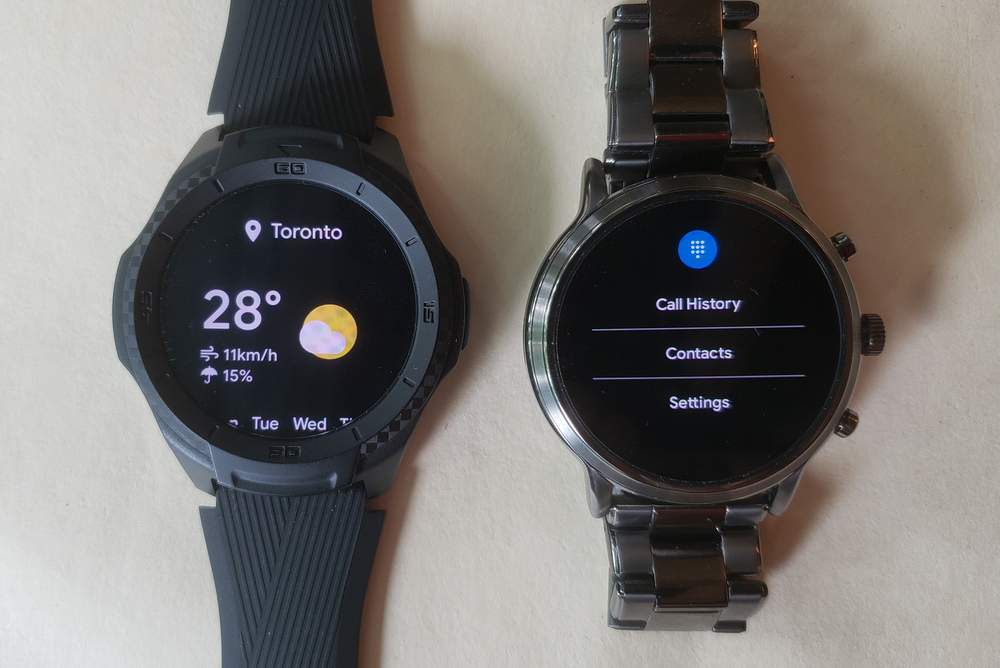 The biggest differences between the Ticwatch S2 and the Fossil Gen 5 Carlyle.is that the Carlyle has one of the best hardware out there. The Ticwatch S2 has more typical hardware.

As a result, the Fossil Gen 5 Carlyle is extremely smooth. I have noticed that Wear OS as a system has gotten much smoother even on the Ticwatch S2 over the past six months, but I also remembered when it was a very sluggish system. The good news is that the Carlyle didn’t have an issue with sluggishness back then and it definitely doesn’t have any right now.

The Ticwatch S2 performs typically. Nothing too distinctly amazing, but compared to many months ago, things are now much smoother and the only time I really notice a lag is when I call up Google Assistant. It takes a while before Google Assistant starts recognizing my speech. 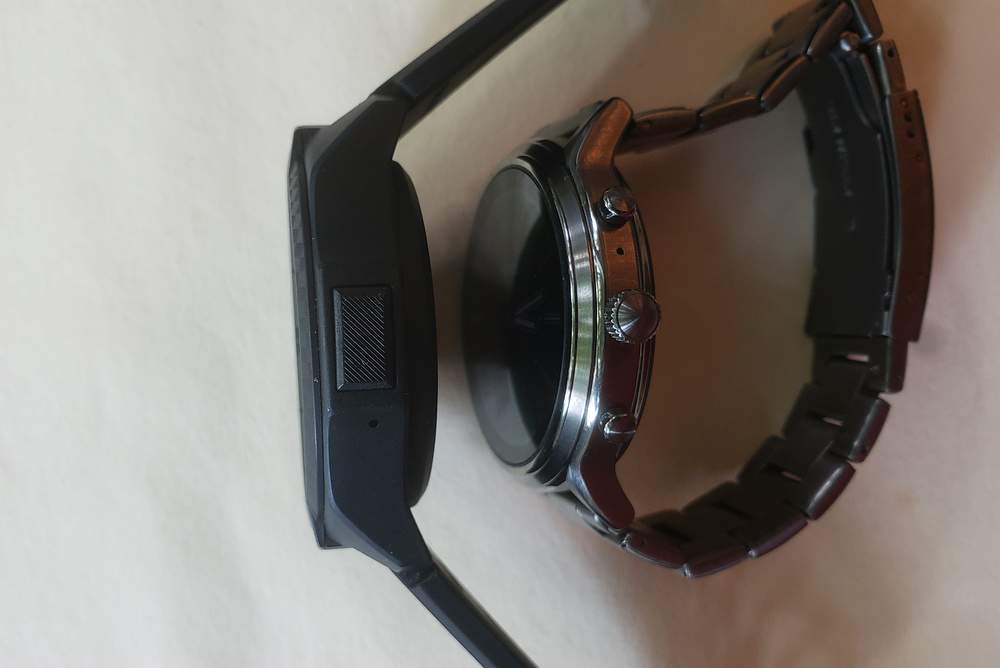 The Fossil Gen 5 Carlyle has two buttons and a crown, while the Ticwatch S2 has only one button.

I like the simplicity of the Ticwatch S2. One button to go back to the main menu. But I really like the crown of the Fossil Gen 5 Carlyle. Having a crown really makes scrolling easier when reading texts or when going through the apps menu.

The Fossil Gen 5 Carlyle has a speaker which means that you can answer calls on your wrist. That’s really convenient. It also means that your queries to Google Assistant can be read out to you, whereas on the TIcwatch S2 you will have to read it off the screen.

The Ticwatch S2 has a US Military Standard 810G which guarantees that it’s operational between -20ºC to 55ºC; resistant to humidity, dust, and salt fog.

The Fossil Gen 5 Carlyle doesn’t make such a guarantee.

The Gen 5 Carlyle’s screen is flush with the top of the watch, while the Ticwatch S2 has a thick bezel where the screen is recessed into.

Despite its plastic watch case, the Ticwatch S2 definitely has the credentials and the screen protection that make it more durable. 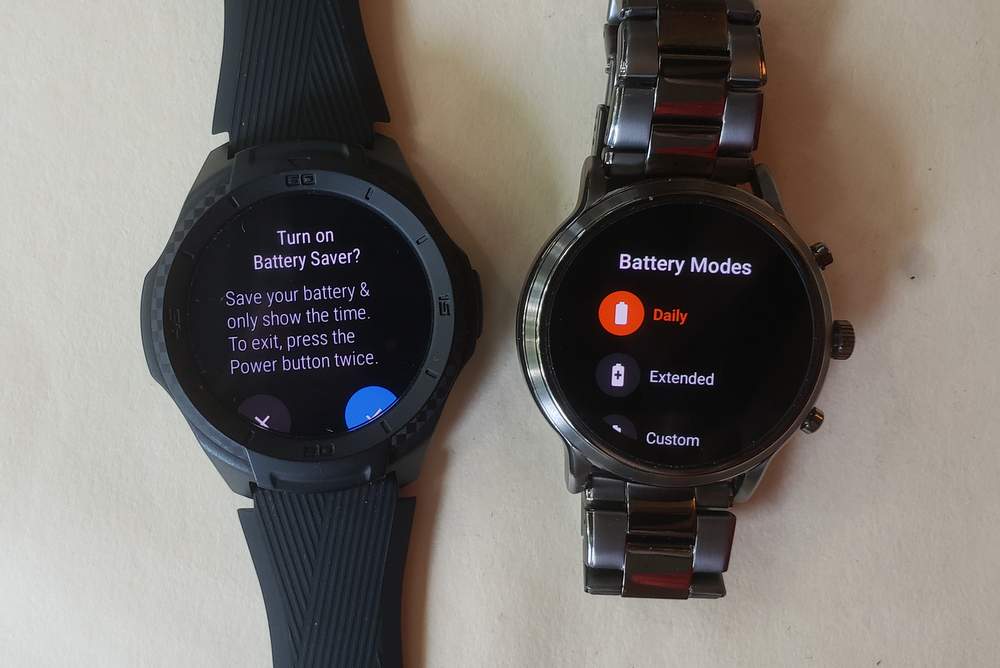 Both watches can last up to two days, but if you do use any of its more battery-taxing features like its internal GPS, then you can expect to charge the smartwatch daily.

Google’s Wear OS is an amazing operating system and both the Ticwatch S2 and the Fossil Gen 5 Carlyle are based on it.

It’s great to be on a Wear OS system because of the many benefits you gain from having a system that is superior. 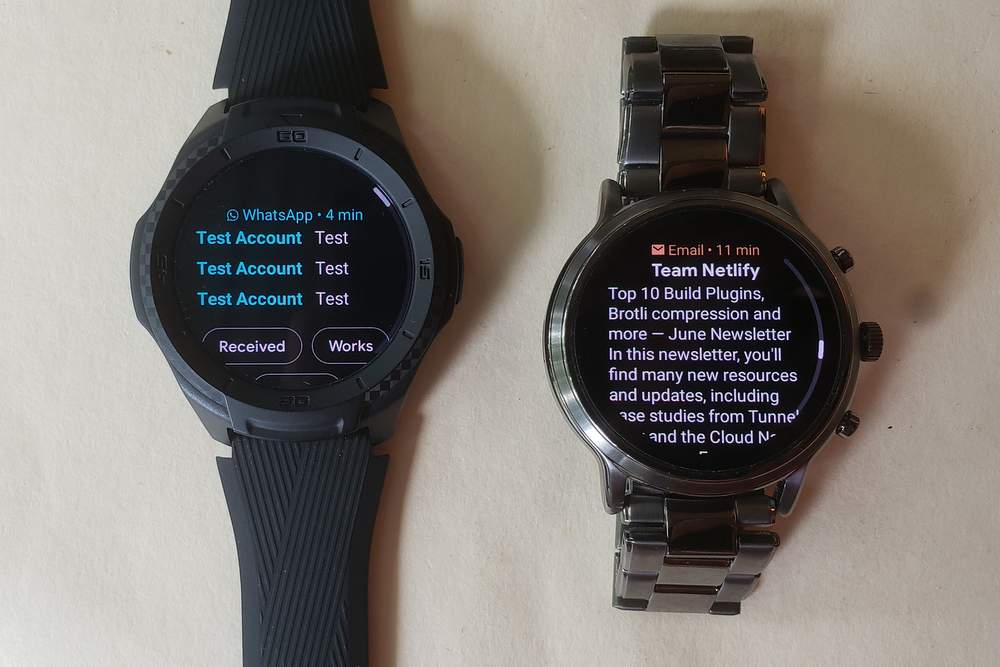 Notifications that you receive on your smartphone will also be received on your Wear OS smartwatch. And on the Ticwatch S2 and Fossil Gen 5 Carlyle, you can reply to these messages as long as you’re paired to an Android phone.

You can also hand write letters, use a keyboard or use emojis and a pre-composed message, but in all honesty, I would always pull out my phone if I had to do manual text input. 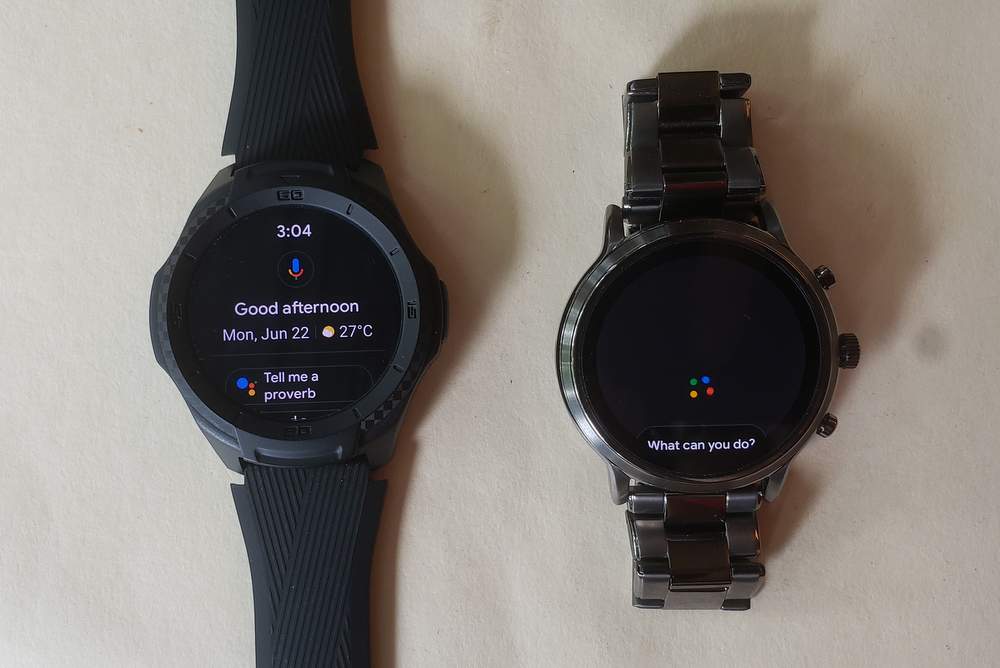 Google Assistant is one of the best voice assistants out there and it’s on both the Ticwatch S2 and Fossil Gen 5 Carlyle.

Think about starting a timer. I always use a voice assistant in order to set it. “Set a timer for four minutes,” I would say.

If you asked the same question to Samsung’s Bixby, it might misinterpreted “four” with “for.” It’s really annoying and makes using the voice assistant a layer of tedium.

Google Assistant can do a lot more than that. It can integrate with Google Maps to give you directions, it can help you find information through Google’s search engine and you can ask it for the weather.

It really helps you avoid doing tedious tasks that require a lot of pressing on a small screen. 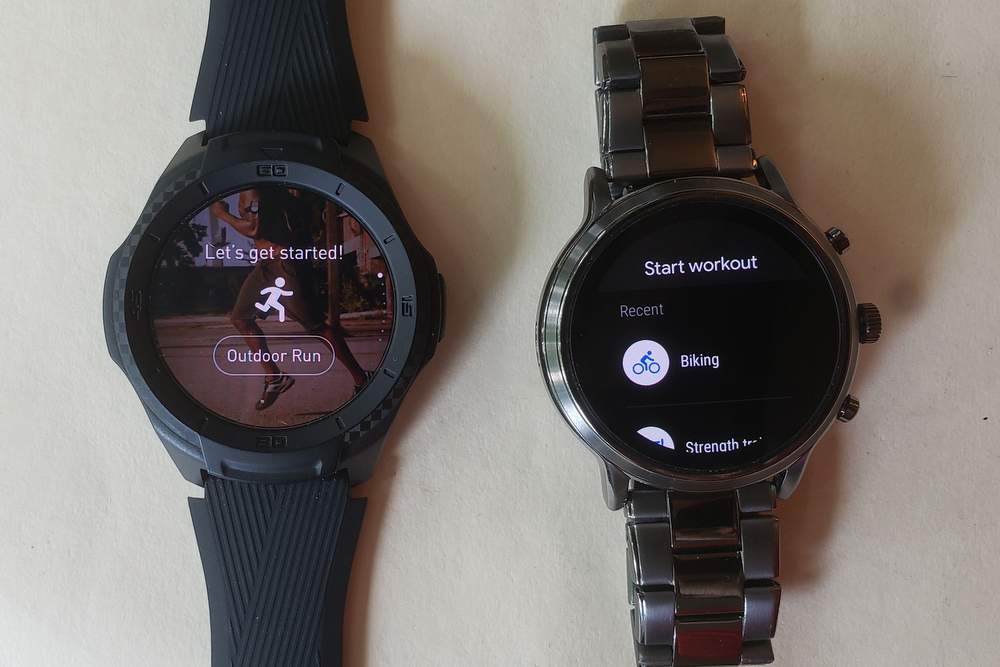 Both the Ticwatch S2 and the Fossil Gen 5 Carlyle have an integrated GPS and you can take both watches for a swim.

Both watches come with the Google Fit suite of health and workout apps. Google Fit has become a very good workout and health app suite. You can measure your heart rate, track your steps and the intensity of your workouts, track many different types of sports. 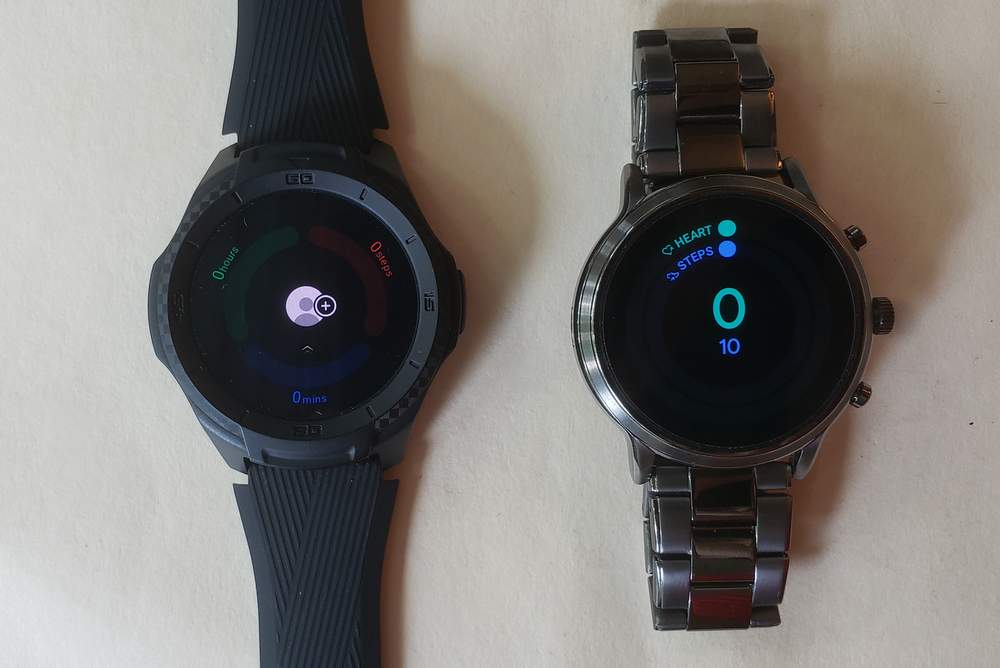 The Ticwatch S2 comes with its own suite of health and workout apps in addition to Google Fit, called TicHealth/TicPulse/TicExercise.

With the new updates to Google Fit, these apps’  advantages have really been ebeed away. That said, it does offer you a Pool Swim function which is not available with Google Fit, which means you will have to download a third-party app.

And just based on this small difference, the Ticwatch S2 has just a little bit of advantage over the Fossil Gen 5 Carlyle. 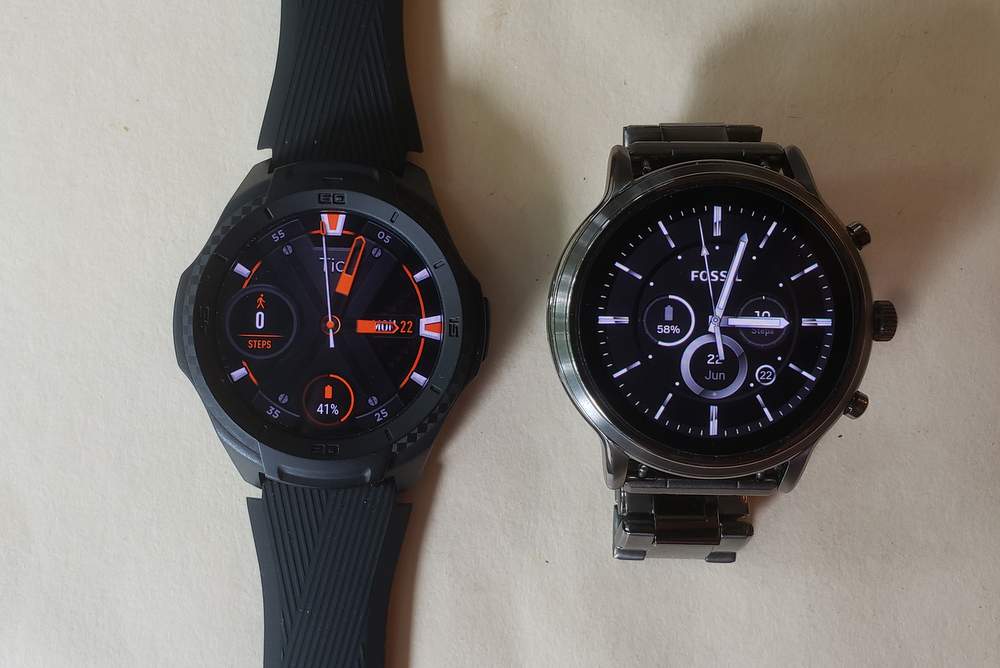 The Ticwatch S2 is a great entry-level watch and in fact has most of the functions that the Fossil Gen 5 Carlyle has.

Should you shell out the extra money for the Carlyle? Yes, if you want one watch for the long term. I think the Fossil Gen 5 Carlyle has much more lasting power. I really like having a speaker so that I can accept calls on my wrist and I also like the band and clasp because it’s so easy to wear and take off.

But the Ticwatch S2 will please most people, especially if it’s your first watch. It’s a great introduction to the world of Wear OS smartwatches.