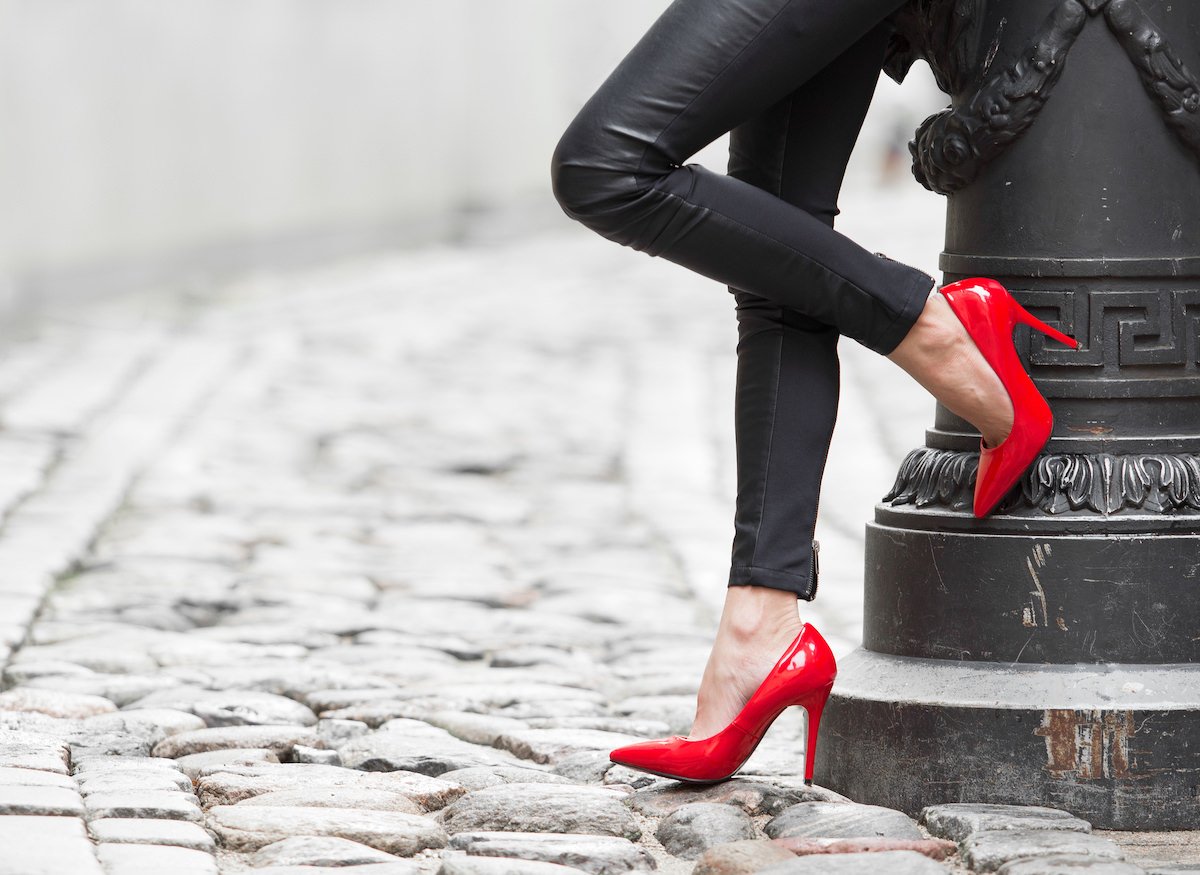 In western culture, pants are a relatively new part of the female wardrobe. It wasn’t so long ago that a woman could get a great deal of negative attention just for daring to wear pants. But today, women have a huge variety of styles to choose from. That’s thanks in part to some of the women who broke barriers by wearing pants and the designers who created them in the first place. 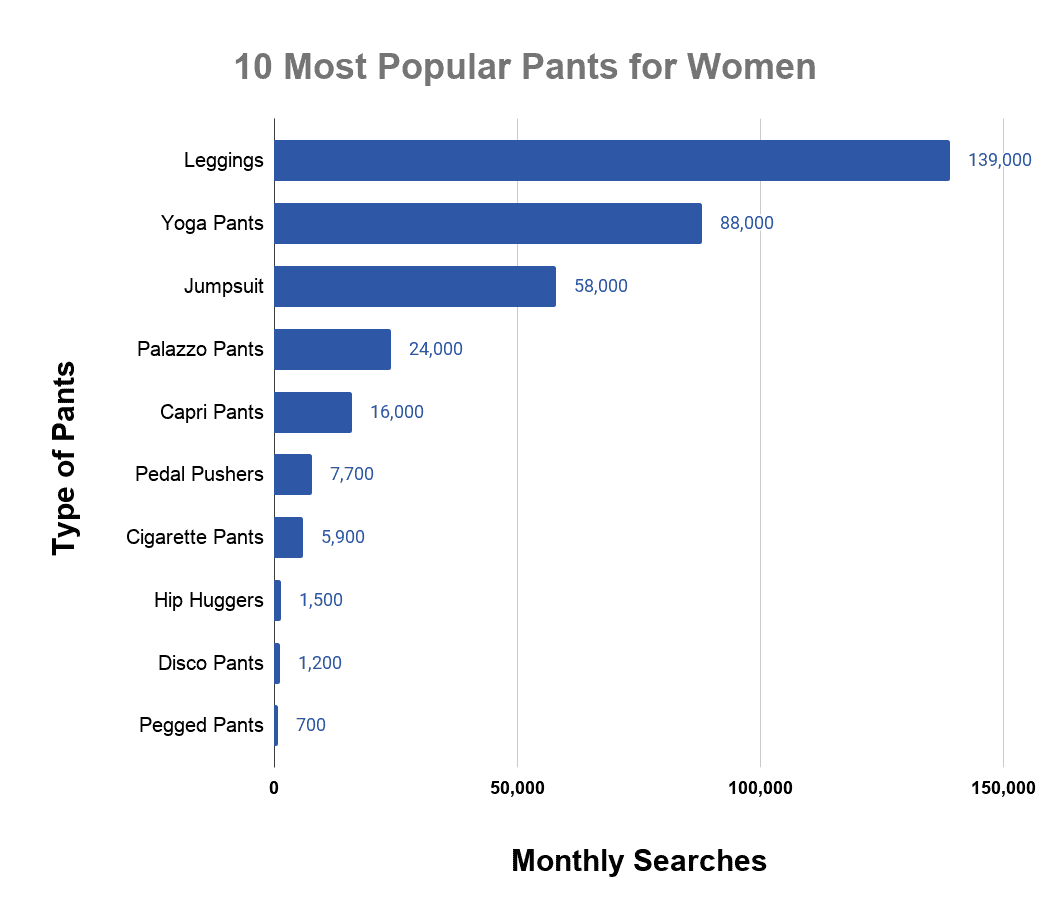 All Types of Pants for Women 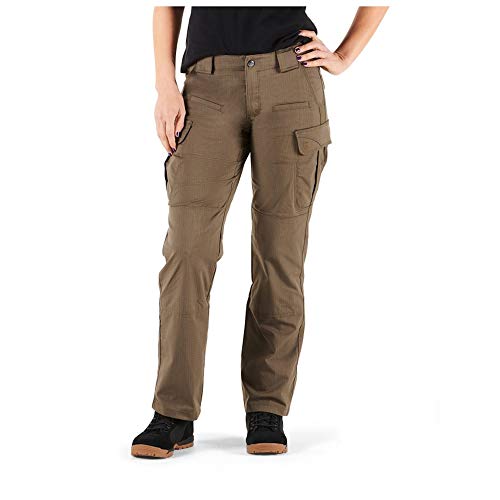 Bush pants are loose-fitting and have a straight leg style. These pants have two large pockets, one on the front of each thigh, though in some designs they may also have additional pockets elsewhere.

According to StyleCheer, bush pants are also called safari pants.

Also known as cropped pants, capri pants are always in style. You can find them everywhere and you may own a pair right now. Since these pants emerged on the fashion scene, they’ve never left.

Sonja de Lennart designed the first pair of capri pants in 1948. According to High Heels Society, she named them after her favorite vacation spot: Capri, Italy.

Capri pants became mainstream in the 1950s thanks to stars like Mary Tyler Moore, Grace Kelly, and Audrey Hepburn, among others.

Capri pants, also called clam diggers, are close-fitting from the waist to the mid-calf. This means that they are great for warmer weather and because they come in different designs and styles, you can easily choose a pair that goes great with your curves.

Capris can also be made out of several different materials, including denim, nylon, cotton, and polyester, but since they are almost always worn in a more casual environment, they are rarely made out of a dressy material.

Cropped pants, also known as cropped trousers, are slightly shorter capri pants that end just below the knee or slightly lower, at the upper calf, according to WiseGeek.

Toreador pants, worn by matadors, are a variation of capri pants that are very close-fitting. Toreador pants are typically made of silk or satin and highly embellished with embroidery and decoration. 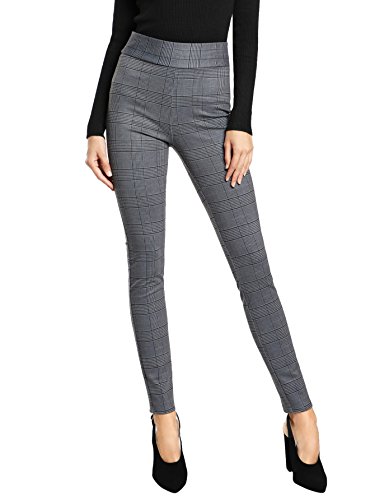 Cigarette pants, also known as narrow pants, became one of the looks to have during the 1950s. Famous stars like Audrey Hepburn and Mary Tyler Moore wore them with style. Soon, every woman wanted to do the same.

Cigarette pants, which may also be called tobacco pants or smoke pants, have a high waist. They’re slim-fitting all the way down to the ankles. The popular color then and now for cigarette pant styles is black, though they are made in all different colors.

You probably know the cigarette pants style a little better by its more modern version: skinny jeans. Also called slim-fit pants, drainpipes, stovepipes, tight pants, pencil pants, and skinnies, skinny jeans are cigarette pants that are made with somewhat stretchy denim. They’re designed to be pretty much skin-tight. The skinny pants style dates to France in the 1600s, according to History of Jeans. If you’ve ever worn a skinny jean style, then you’re worn cigarette pants. 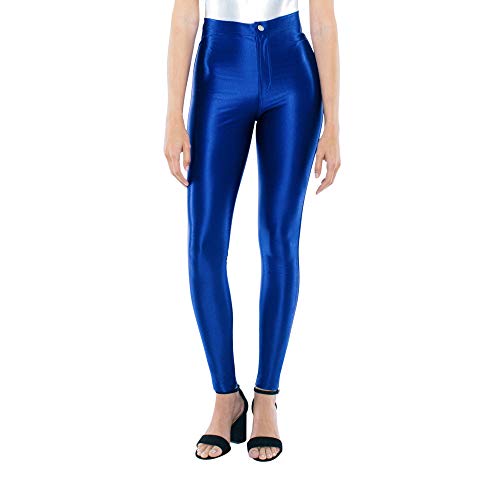 Disco pants is a bit of a confusing term. You probably immediately think of polyester bell-bottoms, a look that was popular in the 1970s, when you hear “disco pants.” Polyester bell bottoms are sometimes called “disco pants” because the look so defines the disco era of the 1970s. But in fashion terms, true disco pants are something else entirely….and confusingly, they were invented in the 2010s, not the 1970s.

True disco pants sprang onto the fashion scene in the 2000s, though they weren’t exactly a new pants style. Disco pants are really a variation of leggings. They’re skin-tight pants with a high waist that closely hug the body all the way down past the ankles.

Also…they’re usually made with shiny fabric. Black is seen often but disco pants are also available in a wide range of bright and metallic shades. Presumably, this style is called disco pants because they look like something that should have been worn a lot in the 1970s…though polyester bell bottoms were still much more popular on both men and women at that time. 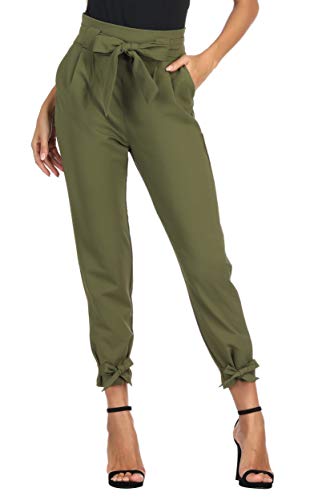 Also called high-waisted pants, high-rise pants have another name that’s been used to be not-so-appealing: mom jeans. Yes, pants and jeans made in high-rise styles have been associated with a look that’s not considered sexy. However, high rise styles are a hot look in the modern fashion scene, according to the New Yorker. It’s a look that cinches the waist, helps flatten the lower tummy, and puts the rear on loving display. What’s not to like about that? 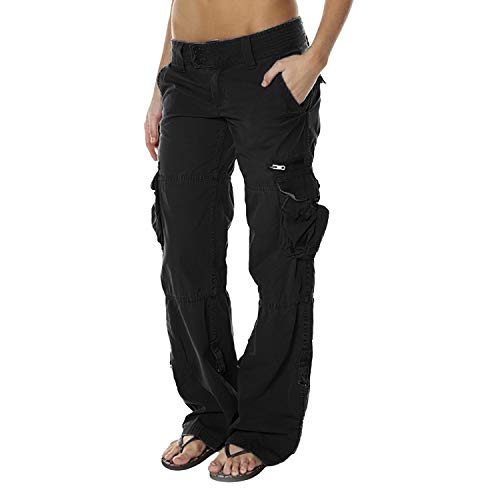 Hip hugger pants, also called low-rise pants or just hip huggers, have been a hot look for decades and all indicators suggest that they aren’t going away anytime soon. So yes, you have to keep on doing your ab exercises!

Hip huggers became a hot look for women in the 1960s when fashion was becoming more liberated. They’ve never faded from popular style and they’re always a hot look in pants of all types.

Often, hip hugger pants are styled with a wide or flared leg opening. They’re made to fit around the hips, not the waist, and generally sit several inches below the navel, according to the Fashion Encyclopedia. 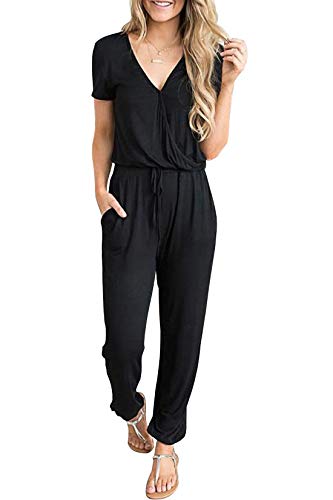 Jumpsuits, as the name indicates, were once worn by parachuters. Today, they refer to any one piece, neck-to-ankle garment. They are also a bit tricky to pull off.

Casual jumpsuits usually come with a relaxed fit that you can give some shape to with a nice belt. Women should avoid wearing jumpsuits that are too baggy, as they can give a very dumpy and shapeless look. They should also be wary of wearing jumpsuits where the waist is completely loose and the backside, hips, and legs look like one long rectangular block.

If you are attending a wedding or a gala, only wear tailored and fitted jumpsuits that hug you in all the right places, like a gown. If you want to wear a shorter version of a jumpsuit that ends mid-calf, choose a flared-leg style. Petite women should be extra careful wearing short jumpsuits, as they tend to stump height. Also, don’t wear jumpsuits that are very tight, as they look unappealing. 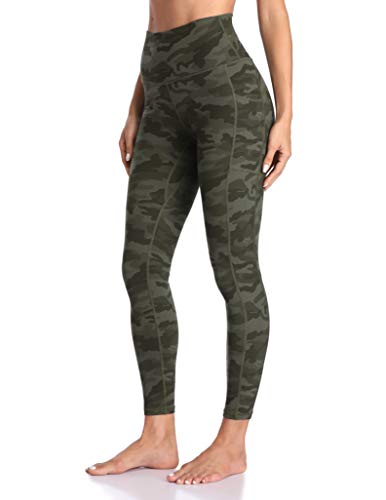 Leggings have only been a major player in the fashion scene in the last few decades but the roots of this style go back a long, long way.

Leggings got their start in the 14th century when very close-fitting pants were popular in men’s fashion of the day. Fast forward about 600 years to the 1960s, and leggings became a trendy garment in women’s fashion.

Leggings hit their stride, pun intended, in the 1980s. The rise of aerobics in the 1980s made leggings the must-have women’s fashion garment. Leggings made their way out of gyms and into the popular fashion scene.

Leggings are very tight-fitting and are usually made of fabrics such as cotton, denim or Lycra. Most of the time, leggings look best with a large flowing blouse and they are definitely an item to wear to more casual occasions. They also come in a wide selection of colors, although most women tend to prefer dark-colored leggings because they look great and match any blouse.

Churidar leggings are an Indian version of leggings. Traditionally, this style is a little more loose-fitting than modern leggings.

Jeggings is a combination word rooted in “jeans” and “leggings.” As patrons started to realize the miracle that was the combination of figure-hugging jeans and stretch denim, the denim started to become stretchier and stretchier until there became practically no difference between the more dramatically Lycra-spandex pants we wear for workouts and yoga and our “street clothes.”

It was a prime invention because women everywhere increasingly want to showcase their figures without sacrificing the comfort and freedom of movement. 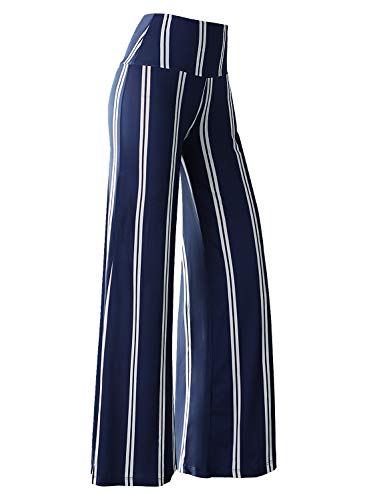 A staple in women’s wear, palazzo pants played a role in feminism. Once cutting-edge and rather eyebrow-raising, these pants are now considered a classic look.

Early fashionistas first wore palazzo pants in the 1930s. Women like Coco Chanel induced gasps by strutting around in pants, a practice that was met with much resistance. Some restaurants and places of business banned women who wore pants.

But no one could stop the trend from catching on in the 1960s when feminism skyrocketed to public consciousness and women began to change everything about fashion…and the status quo.

Also known as wide leg pants, palazzo pants fit around the waist and then flair out at the legs. Early palazzo styles flared out from the knee downward. In modern styles, palazzo pants may flare from the hip down and the wide legs may be extremely wide. After all, fashion is all about playing with style and challenging the norms. Palazzo pants have been doing that for decades.

These pants are usually very loose-fitting. Usually made out of wrinkle-free fabric, palazzos go great with both trendy blouses and tank tops, making them a great go-to clothing item that every woman should have in her closet. The main characteristic that makes palazzo pants different is the fact that the legs are very wide and the pants themselves are very loose.

If you go to a professional fashion show, you will likely see a lot of these types of pants on the runway, in part because they come in such a wide selection of fabrics, prints, designs, and of course, colors. When it comes to finding the right pair of palazzos, the sky is the limit so regardless of your personal preferences and tastes, you are all but guaranteed to find something you love. 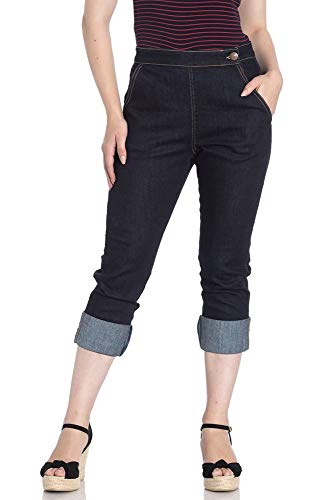 Like many iconic fashions, pedal pushers began as a practical garment. But these pants were embraced by style mavens and soon became an iconic look that’s still worn today.

Pedal pushers became popular in the 1950s, around the same time as capri pants. Like capris, pedal pushers end at mid-calf but they have a much looser fit. They were originally invented to make it easier for women to ride a bicycle. Hence the name, pedal pusher. 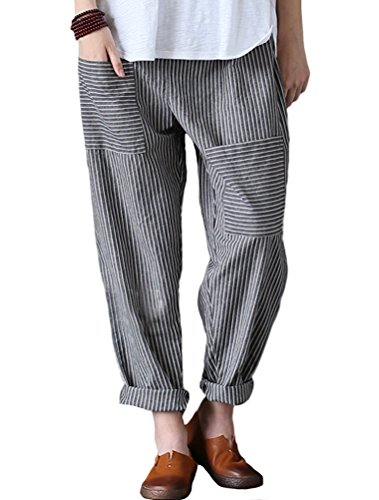 Pegged pants were a signature style of 1980s fashion but like all trends, they’ve made a comeback in more recent times. It’s a great way to show off your shoes and a fun throwback to fashion history.

Pegged pants are loose-fitting pants that are “pegged.” That means you take the bottom of the pants, fold them over and roll them up to about mid-calf. It’s that easy to get a pegged pants look, according to the Los Angeles Times.

Contrary to their name, yoga pants are not only worn during a yoga or exercise class. They are some of the most comfortable pants you can wear because they allow you to stretch and move into all sorts of positions and still remain comfortable. Although they are skin-tight, they allow you to move well because they are usually made out of soft fabrics, such as cotton. Yoga pants also come in a wide selection of shades and colors so you can purchase several pairs and wear them whenever you wish.

Some people believe that leggings and yoga pants are the same but there are several differences between the two. Yoga pants, although made to fit you tightly, are not as skin-tight as leggings; in fact, they can be quite loose in certain areas. They also tend to be a lot more colorful than leggings and can be very decorative and eye-catching.

The fabric between these two pant types is also somewhat different as yoga pants are made to be worn alone and therefore their material is a lot thicker and opaque. Of course, both of these pants are made for comfort and fashion. 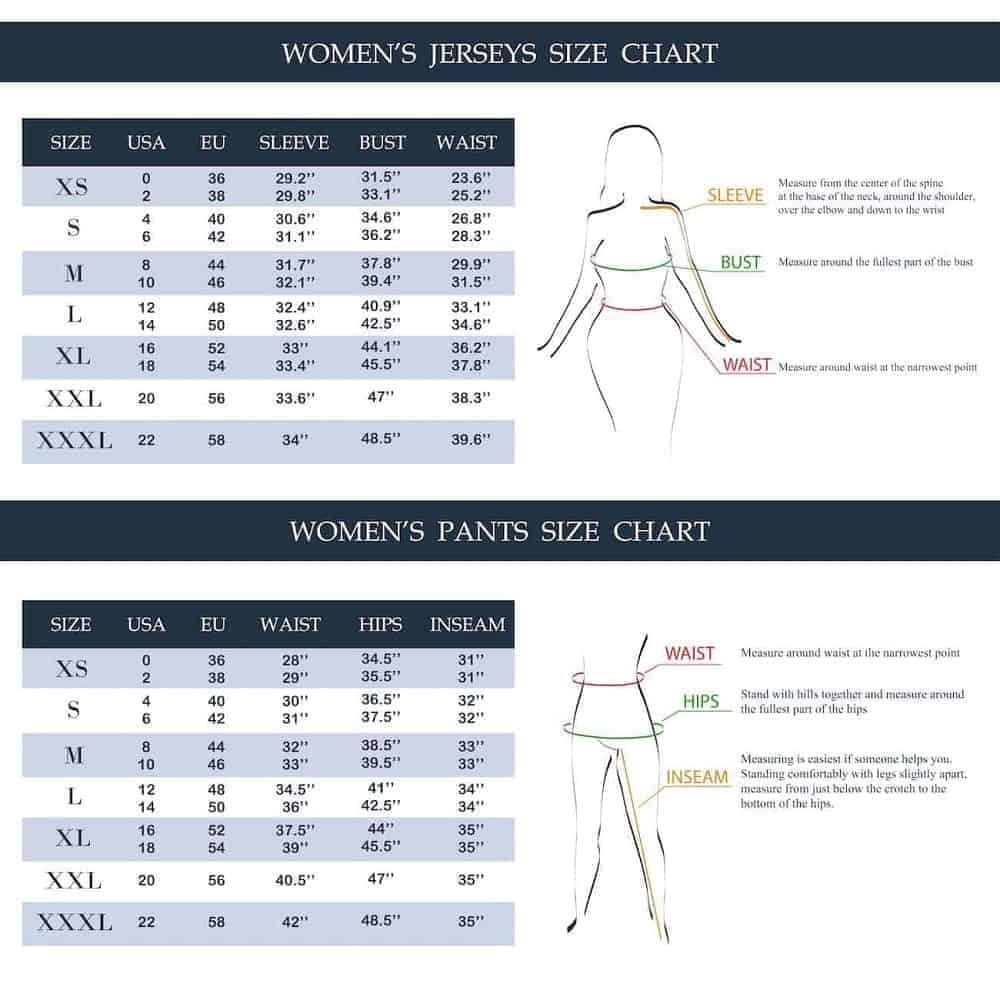