Skip to Content
The Ticwatch E2 and the Polar Vantage V are marketed as smartwatches for sportspeople. But these watches are really meant for two different consumers. 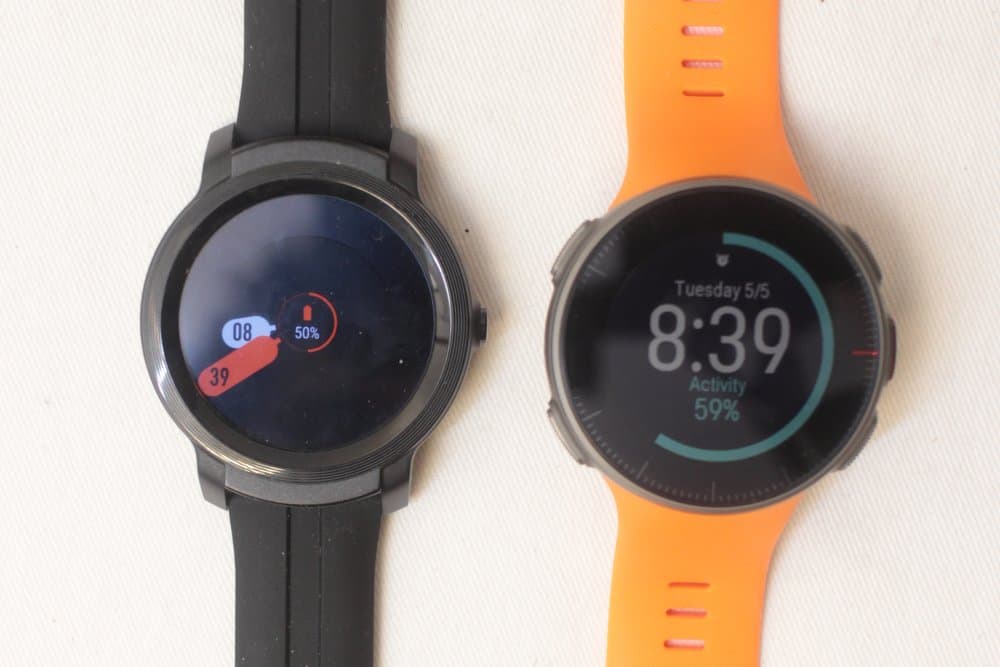 The Ticwatch E2 is marketed as a sport watch and so is the Polar Vantage V.

But they are leagues apart. Not only in how they look, function and the things they can do, all the way to their prices and target market.

The Polar Vantage V has five buttons while the Ticwatch E2 has one button. Perhaps that’s a good place to start. 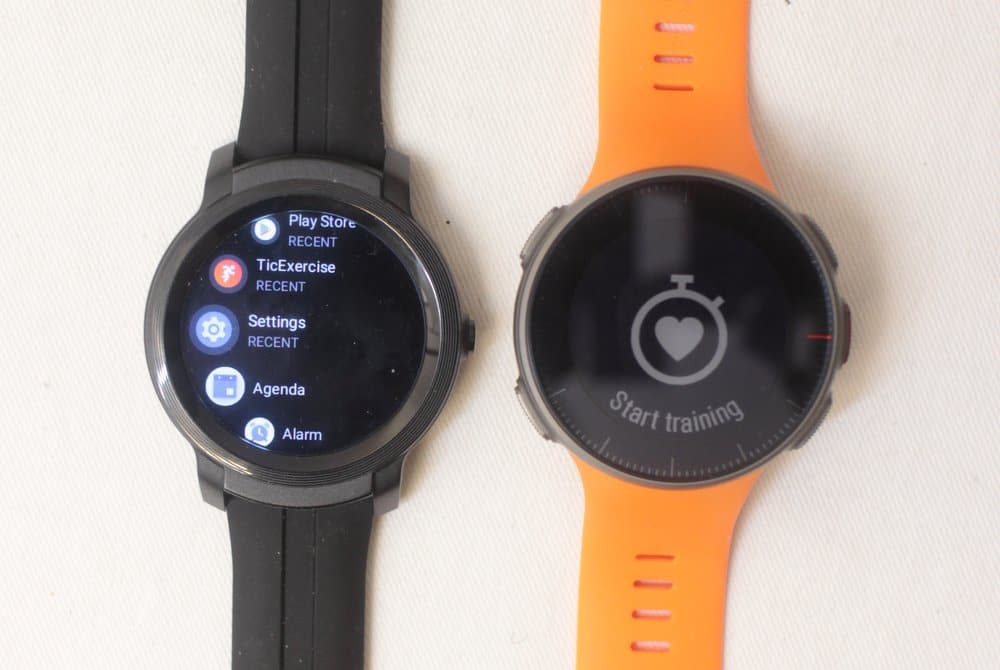 Who is it for?

Remember BlackBerrys? A brand that prides itself as a businessperson’s tool. It is probably the only major brand of phone which resisted the move to digital keyboards.

The Polar Vantage V also means business with its five buttons. Specifically, this watch is meant for sportspeople who mean business. It has a touchscreen but it’s not a primary means of input, just like a BlackBerry. If you want to do anything, it’s buttons first.

The Ticwatch E2 stands on the opposite side of the spectrum. It’s a general purpose, mainstream watch meant for people who need a smartwatch that can help them with daily tasks that would otherwise require pulling out your smartphone. It’s the equivalent of a smartphone meant for everyday use.

The Wear OS is backed by Google and is the standard OS on many smartwatches. Just like Androids are on many smartphones.

On the other hand, the Polar Vantage V uses a proprietary operating system, quite typical of very special-purpose smartwatches.

The Wear OS is definitely a more vibrant and dynamic operating system. You’d just have to go into both watches’ app stores to see the difference. 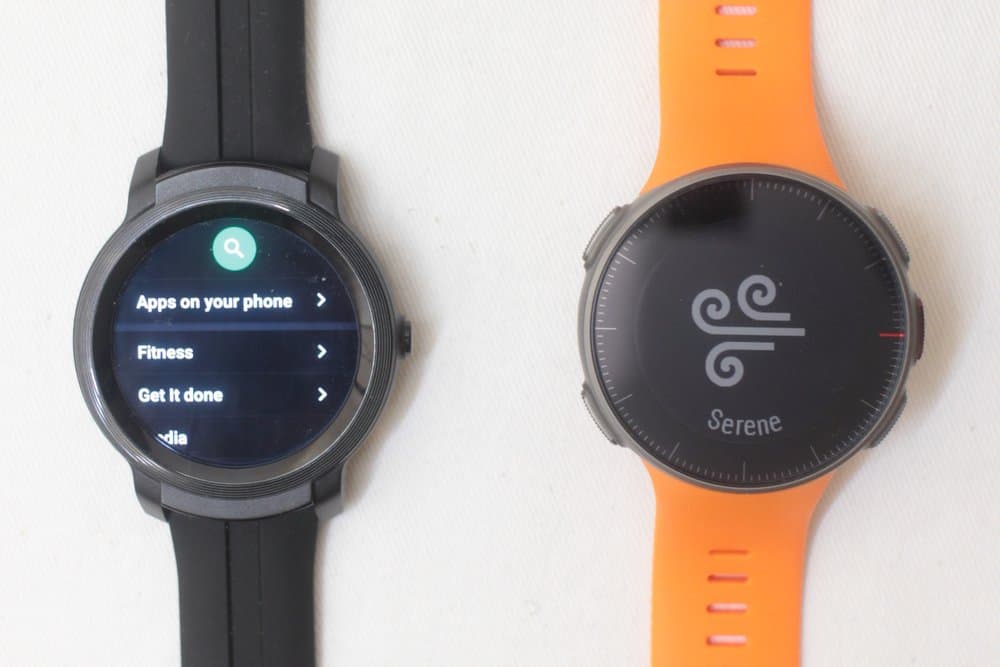 Uh wait — the Polar Vantage V does not have an app store. It’s like a Casio watch of 1998. What you get is what you get, and until Polar decides to add a feature in, you can’t go out of your way to add it in. The last update brought the Serene app which helps you do timed breathing.

The Ticwatch E2 has access to many great apps including Google’s smartwatch versions of Keep, Maps and Translate. Amusingly, during COVID-19, they have also added a handwashing timer. You can also add other apps such as games, grocery shopping list apps and many others.

The Ticwatch E2 comes with the four-year-old Snapdragon Wear 2100 processor and 512MB of RAM. Once in a while, the watch will have uncomfortable pauses and stutters, but otherwise performs well. Comparatively, the Polar Vantage V is seamless in its operation.

Both watches have an integrated GPS for tracking your workouts and they are both designed for swimming pool use.

More importantly, the Polar Vantage V does not have a speaker or a microphone. It has a buzzer that reminds you of a ‘90s pager, but it works fine for notifying you of important things and is loud enough to function as an alarm.

The Ticwatch E2 has a microphone but no speaker. This means you make calls on the watch but you can use the Google Assistant voice-activated task helper and also use the speech-to-text system. 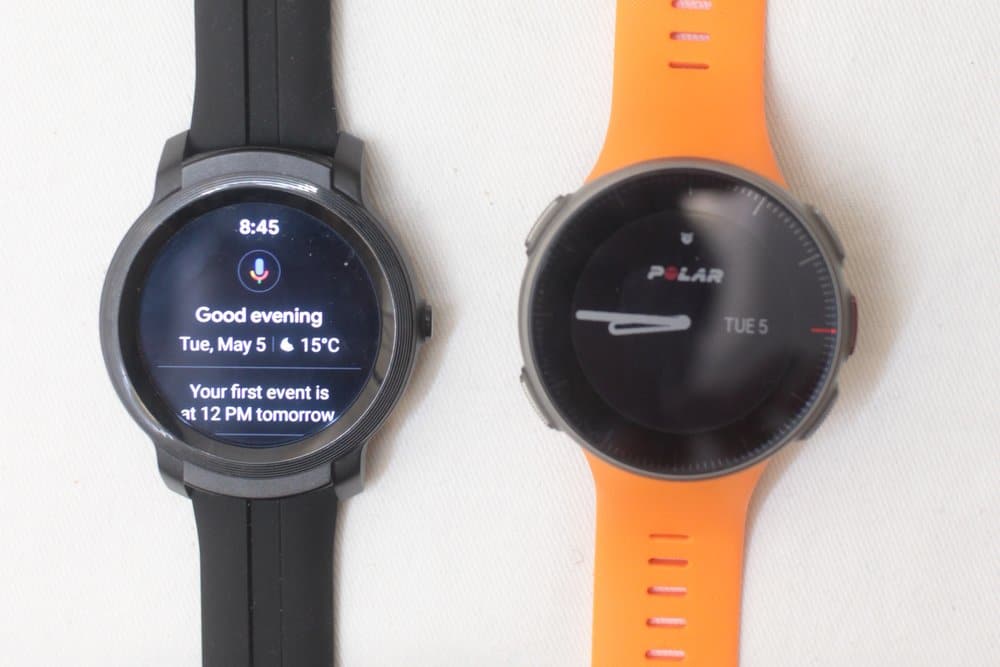 Having a voice assistant is very useful because you can do a lot of things without tediously tapping and scrolling on the small watch screen.

Google Assistant, in particular, proves very useful because it is backed by Google’s ability to transcribe speech into words and then to interpret phrases and activate the appropriate command.

Let’s put it this way — say you need a 20 minute timer for cooking. Doing this on the Vantage V requires you to do it manually. It’s not as tedious as the Garmin Fenix 6, which has no touchscreen, but it really feels tedious nonetheless.

On the Ticwatch E2, all you need to do is to press and hold the sole button on the watch to activate Google Assistant and speak in natural language to “start a 20 minute timer” and Google will do it for you.

This is a fantastic convenience that extends to helping you find information on a topic or finding directions. 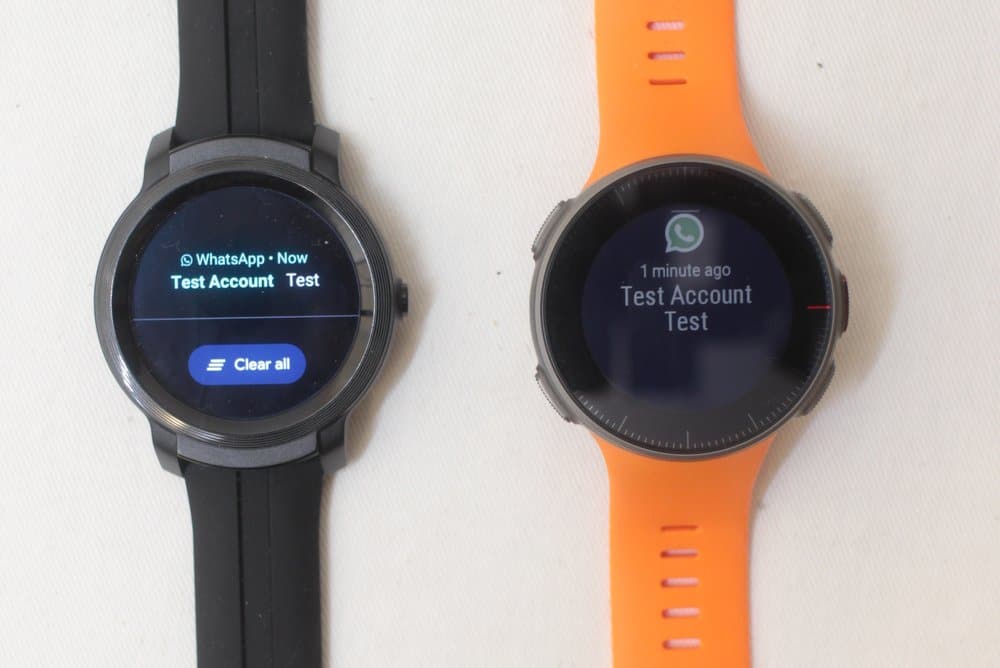 Being able to receive emails and texts on your wrist is a very useful feature. It helps when you are in the middle of something and need a convenient way of replying. For example, when you need to notify someone you’re late.

But you can’t do any texting or emailing on the Polar Vantage V. You can only read your notifications.

Whereas on the Ticwatch E2, not only can you read your emails and text that come through your notifications, you are also able to reply. My preferred way of replying is through its speech-to-text transcriber. It’s really accurate and reliable. 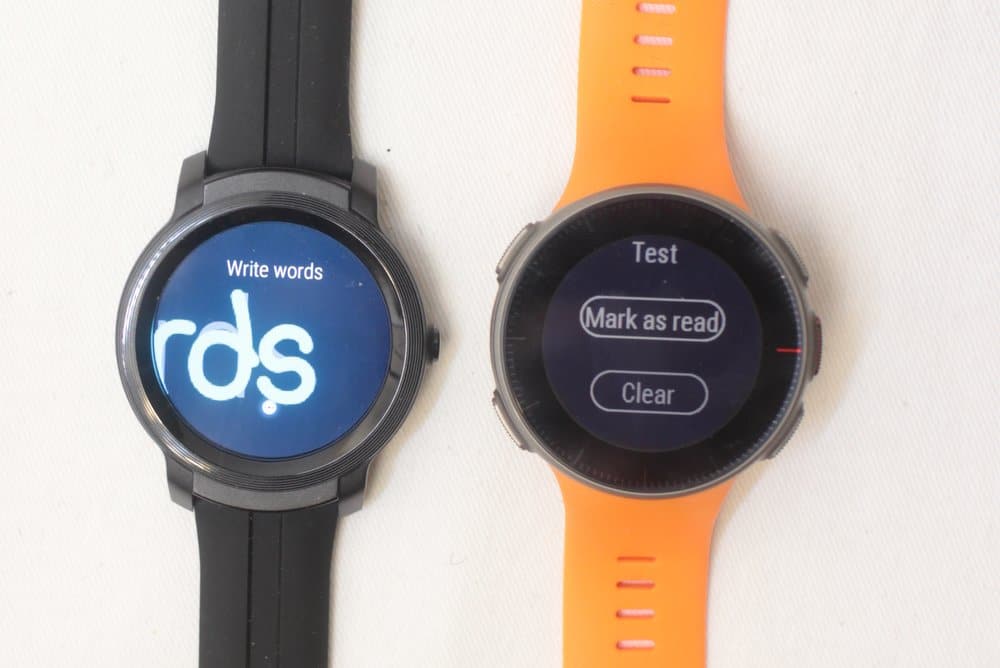 Otherwise, you could use a pre-composed reply, a keyboard or by handwriting letters to form words. These options are a bit more tedious if you have a complicated reply, but are useful when you are in a silent environment where you can’t speak. 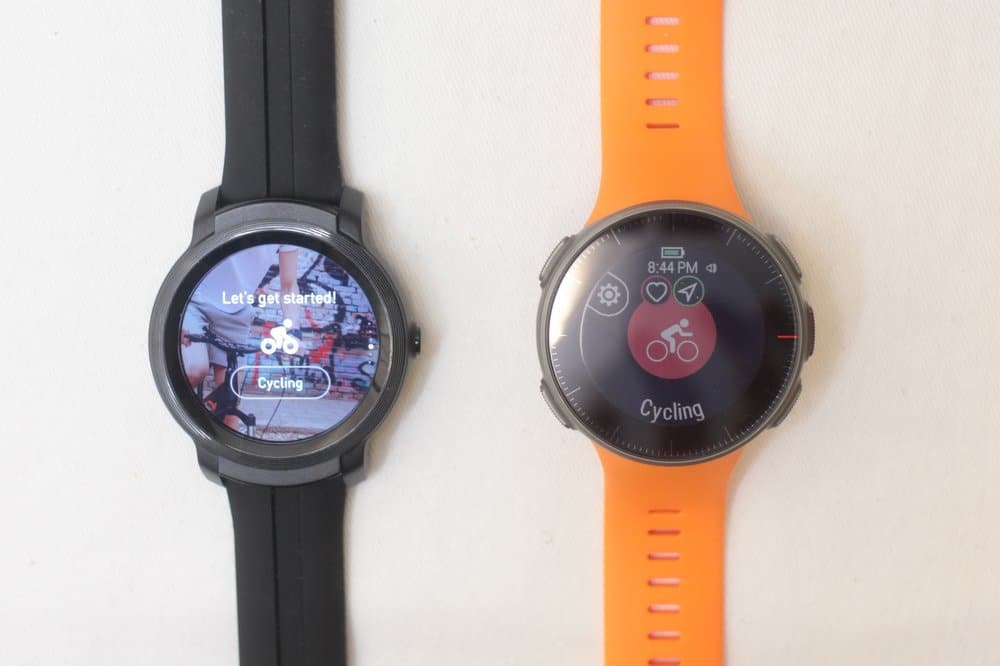 Now we’re entering into Polar’s area of specialty. The Vantage V has class-leading functionality in this regard and the Ticwatch E2 feels like a knife in a gunfight.

It really helps that the Polar Vantage V has great battery life as a result of its power-saving screen, so you can track your workouts for hours and hours.

Particularly for runners, the Vantage V can advise you as to the optimal level of workload and it can also come up with exercise suggestions for you based on the data it collects from daily wear. It will also track your sleep to determine whether you are recovering well.

The Vantage V also comes with the Polar Running Program which creates an exercise regime customized to your next race and fitness level. The watch can also estimate your power output (but only when running).

There are other cool features in the watch too that can help you understand the change in your fitness. One of them is the measurement of your VO2Max, which requires you to lie on the bed still for a while. It will then give you a score which is useful over time to see your gains.

The Ticwatch E2 has a simpler set of tools including its own proprietary tools and the Wear OS’s Google Fit suite of lifestyle tools. They track steps, the intensity of your exercise through Heart Points, your heart rate and rouses you from idleness if it detects inactivity.

Google Fit has many workouts you can track, but swimming is not one of them. Thankfully, you can track swimming using the Ticwatch E2’s proprietary software.

I can wholeheartedly say that the Polar Vantage V is an excellent sports watch with features that sets it far ahead of the Ticwatch E2.

If you want a watch with the primary goal of functioning as an extension of your cellphone, then the Ticwatch E2 is a great smartwatch at a great price. As a watch, it’s great too because there are many watch faces you can swap around until you find one you like.

On the other hand, the Polar Vantage V is meant for a very select group of people who know they want a watch that will help them with their health and lifestyle. It also comes at a premium too, so make sure you buy this watch knowing that not only are you paying a lot of money but also losing a lot of general-purpose features. But as a sports watch, it’s fantastic and only beatable by the Garmin Fenix 6.