Skip to Content
Have you boiled your smartwatch purchase down to the Ticwatch E2 and the Fossil Gen 5? If so, learn about the nuanced similarities and differences in this detailed comparison. 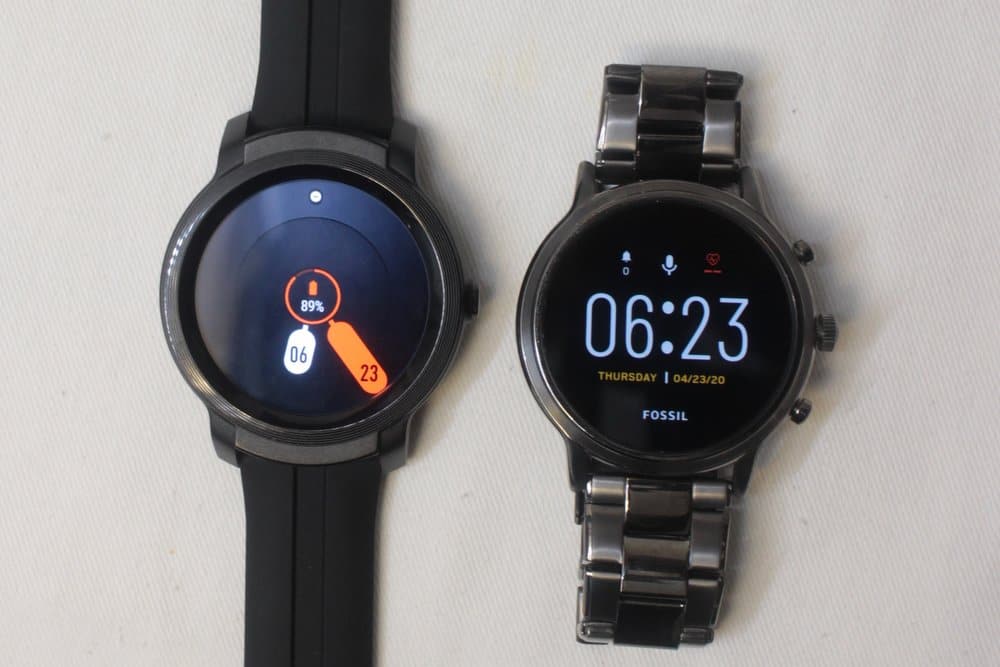 The Fossil Gen 5 Carlyle is my favourite Wear OS smartwatch. It provides the best Wear OS experience you can have because the Carlyle’s hardware is one of the best in the market.

The Ticwatch E2 is a bit less dazzling than the Carlyle but it offers a great experience for its price. I would also say that the Ticwatch E2 is probably my favourite entry-level smartwatch out there. 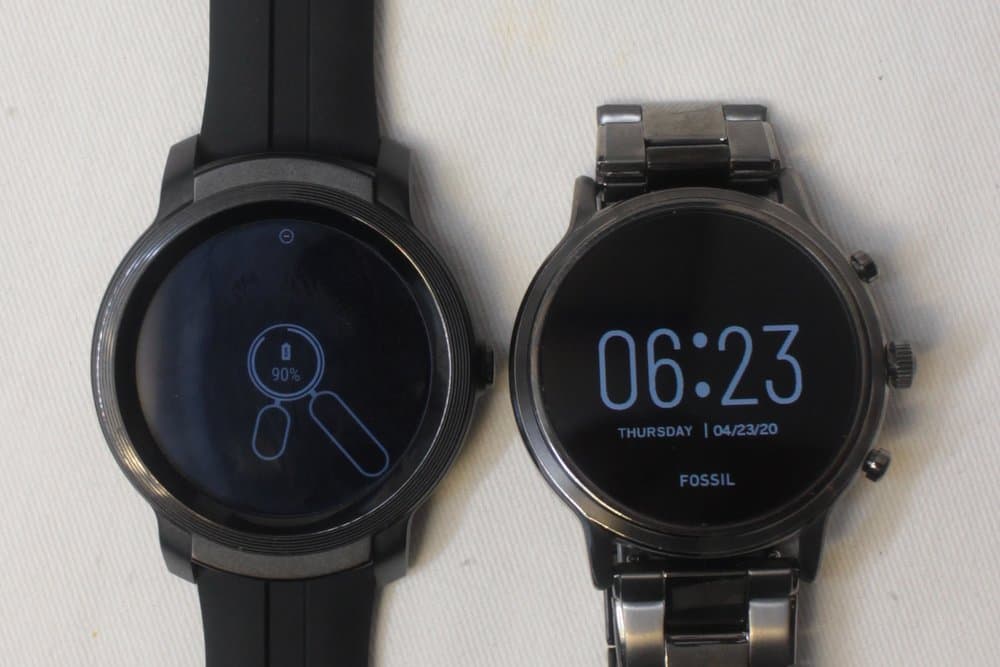 In terms of materials used to make the watches, the Ticwatch E2 and the Fossil Gen 5 Carlyle are worlds apart.

In fact, one of the biggest differences between the Fossil Gen 5 Carlyle and most other watches is its bracelet. It’s a lot of work at first to adjust the bracelet to your size but once you’re done, you can get the watch on and off your wrist in one or two seconds.

The Ticwatch E2 has a more traditional silicone strap which works just fine.

The all-metal build of the Fossil Gen 5 Carlyle means that it is a heavy watch, and the opposite is true for the Ticwatch E2.

As a result of the different materials used, the Fossil Gen 5 Carlyle looks more professional while the Ticwatch E2 looks more casual and sporty, which is its target market.

The Fossil Gen 5 Carlyle comes with higher-end hardware. It has a Snapdragon Wear 3100 processor and 1GB of RAM while the Ticwatch E2 has the older Snapdragon Wear 2100 and 512MB of RAM.

In practice, both watches are quite smooth in operation except the Ticwatch E2 can sometimes suffer from delays and lag. The Fossil Gen 5 Carlyle is extremely streamlined. I don’t think I can remember a time where it has annoyed me for being slow.

This is a notable breakthrough on Fossil’s part because most Wear OS watches can suffer from lag and unresponsiveness, even in Fossil’s entry-level watches. If you want the best Wear OS experience, then you need the Carlyle. 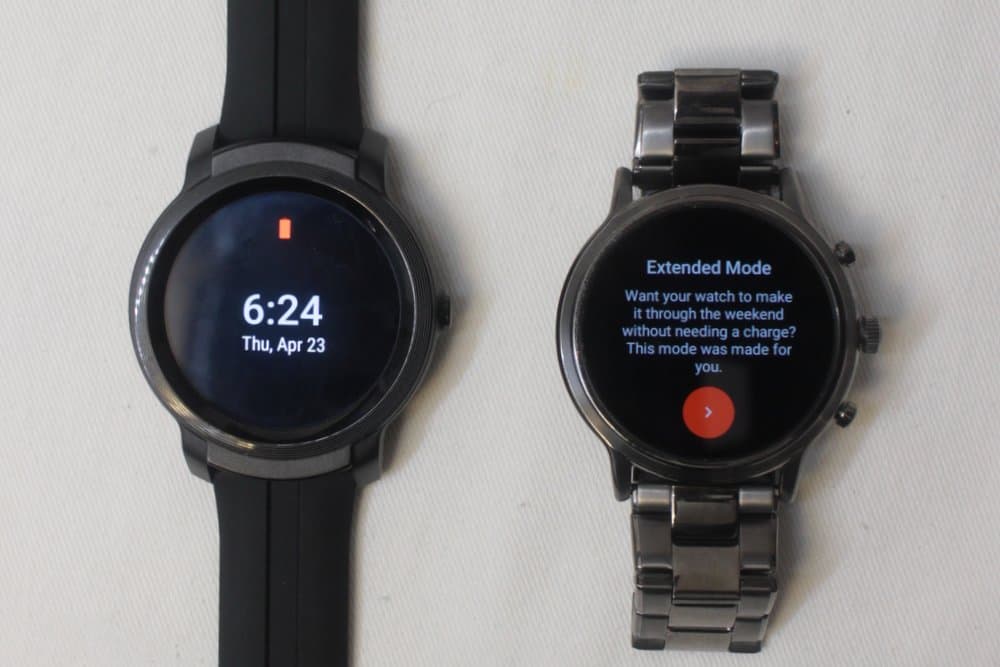 Both watches will last about two days with the continuous heart rate sensor turned off and the always-on screen active.

To further extend the battery life, the Fossil Gen 5 Carlyle has three pre-programmed modes that disables some functionality in exchange for longer battery life, such as the always-on screen or limiting the heart rate sensor’s reading frequency, whereas the Ticwatch E2 only has one battery saver mode which makes the watch tell the time and date but nothing else.

The joys of Wear OS

I really like the Wear OS system. I think it’s one of the best out there, next to Apple’s WatchOS. Both the Ticwatch E2 and the Fossil Gen 5 Carlyle use this system.

Critics would say the Wear OS is slow and is poorly supported. I do agree that if the hardware is lacklustre, the slowness is very perceptible, but both watches perform well in this regard.

The upside to a Wear OS watch is that you get access to a huge range of apps and more importantly, Google Assistant. 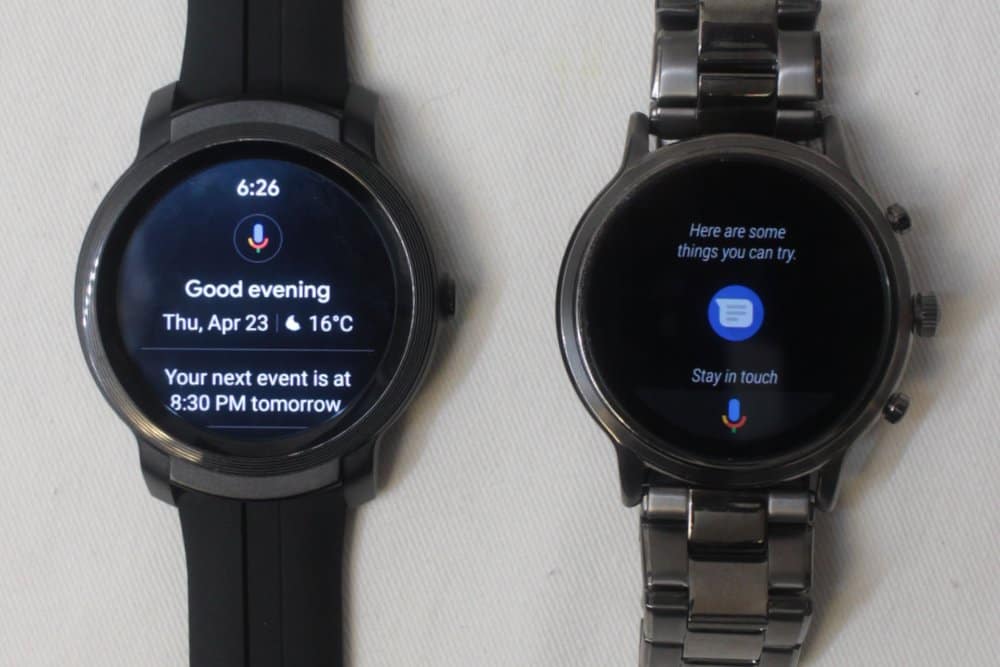 The best part about having a smartwatch is how it can reduce the number of tedious tasks.

Google Assistant shows its strength very early on because it understands what you say and how that translates into action on its part. For example, a very simple task is to start a timer.

Because Google understands you, it can start a timer for the appropriate amount of time. This is notable because Samsung’s Bixby can sometimes fail this very basic task and lead to more frustration.

Google can also help you find directions (with Google Maps), tell you the weather, do calculations and find information.

Did I just mention Google Maps?

Yes, on a Wear OS, you can use Google Maps as well as a range of other Google apps such as Translate and Keep.

And because the Wear OS has a big user base, the app store is also a lot more diverse and vibrant as compared to platforms with smaller user bases such as Polar’s, Garmin’s or Samsung’s. 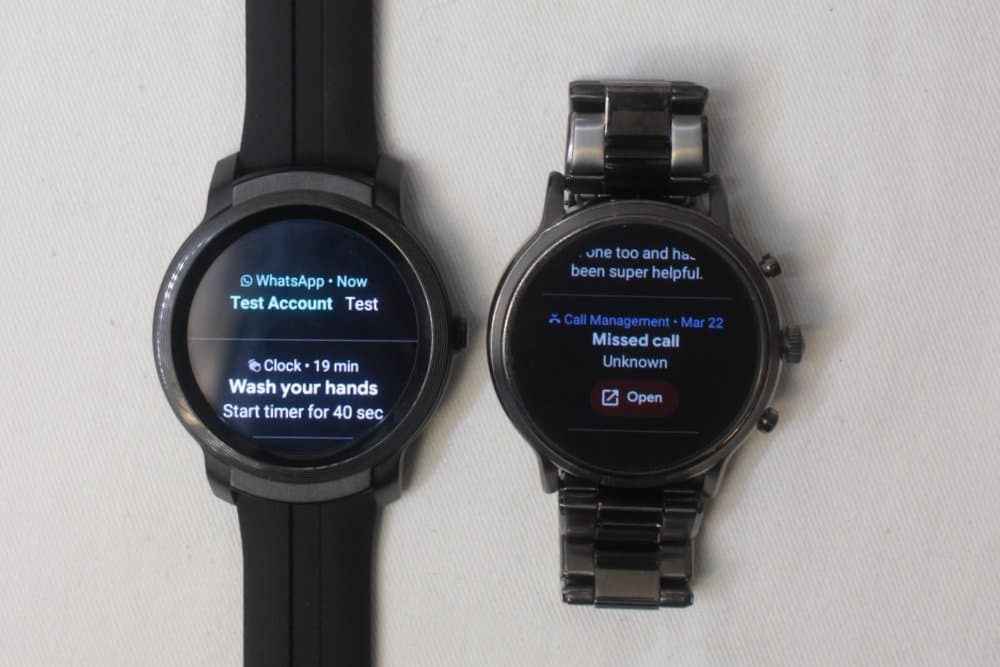 What I really like about wearing a smartwatch is the ease of access to my emails and texts. In the past, I would leave my cellphone around the house and miss urgent emails and text.

Wearing a watch would mean that these notifications are directly on your wrist and you can read and reply to them on an Android phone. Unfortunately, if you are pairing both watches to an iPhone, you would not be able to reply to them.

Replying to messages is very easy through the speech-to-text system. You get the same, reliable transcription engine that Google provides. 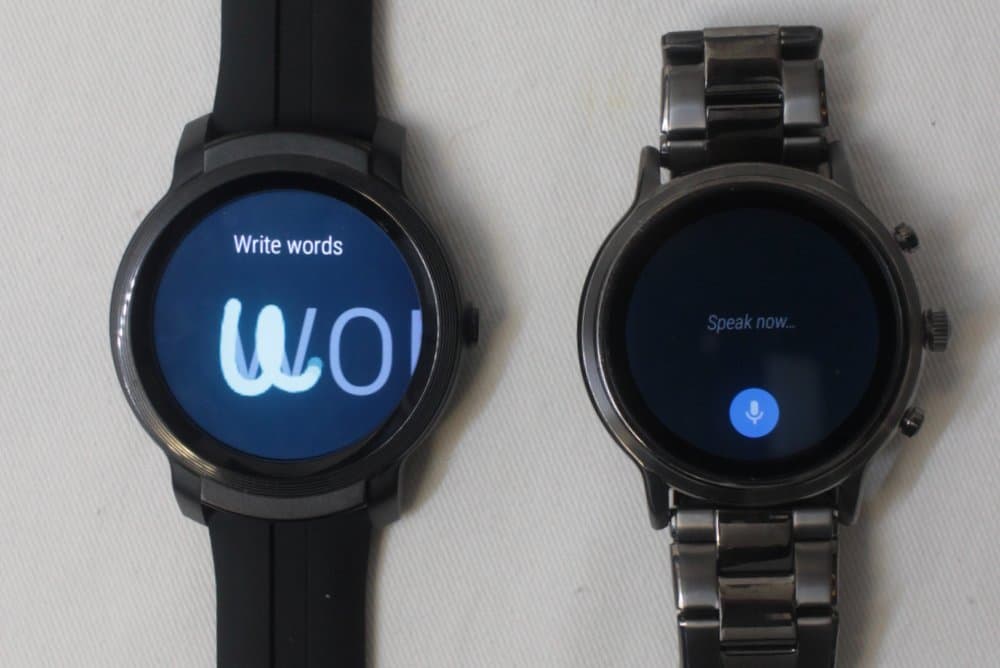 Otherwise, you could use a pre-composed reply, use a keyboard or form words by drawing letters.

At the end of the day, the speech-to text system is the least tedious, most accurate and least tiring solution. But I also like the alternative options in case you’re in a quiet environment and can’t talk.

Unfortunately, there is no native app that allows you to access your emails or messages directly, as if you were on your phone. But you can download third-party apps that can do this for you. It’s just an additional layer of hassle.

The Ticwatch E2 does not have a speaker and therefore you can’t make or take calls on it. The Fossil Gen 5 Carlyle has a speaker which allows you to do that. In fact, the Carlyle is the only Wear OS watch that will allow you to take a call on both Android phones and iPhones. 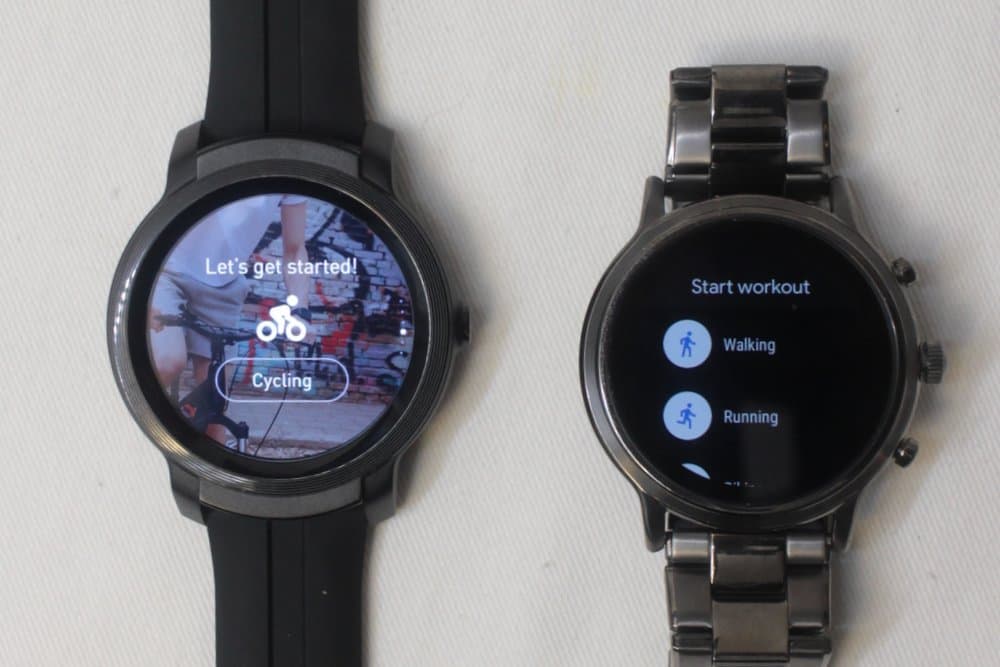 Both watches are waterproof for swimming and both have an integrated GPS.

But while they are equal in sports hardware, the Fossil Gen 5 Carlyle does not have a pre-installed app to track your swims. The Ticwatch E2 does.

Fossil watches come with Google Fit, which is a great fitness tracking app with many options beyond the basic running, cycling and swimming. It also tracks your steps and Heart Points, which measures the intensity of your activities.

The Ticwatch comes with apps from its parent company, Mobvoi. These apps include TicExercise, TicHealth and TicPulse. In essence, what they collectively do is similar to what Google Fit does.

This overlap is a bit uncomfortable for me because having two apps running in the background and providing the same functionality is a bit counterproductive.

Nevertheless, the TicHealth tracks the number of steps, and periodically reminds you to get active if you have been sitting for too long, which Google Fit doesn’t. 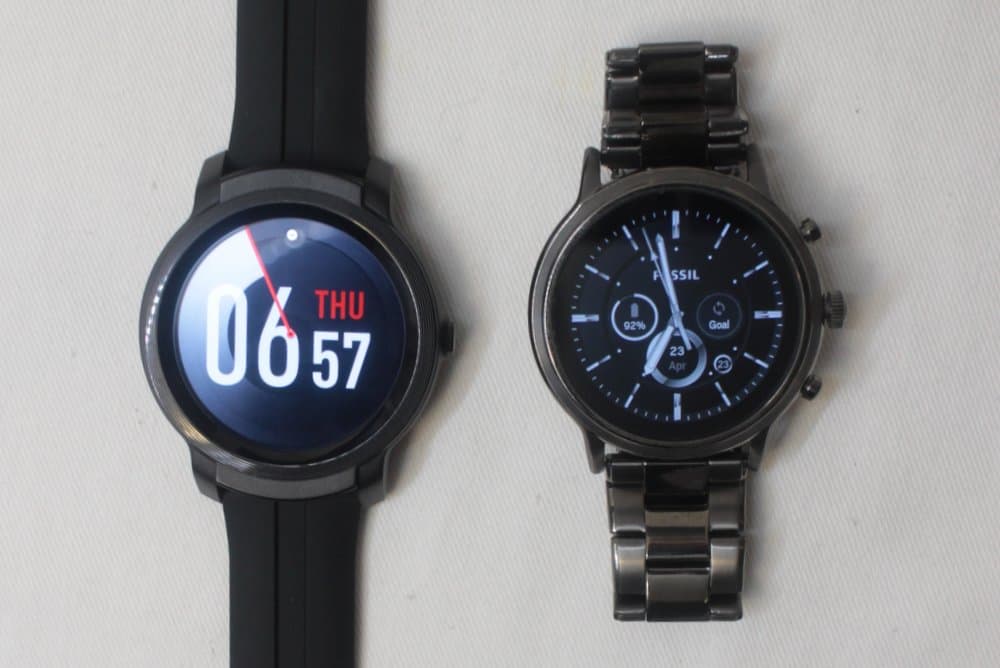 The Ticwatch E2 is a really good entry-level watch. It has great functionality for its price and offers you a very good introduction to smartwatches.

You should get the Gen 5 Carlyle if you want the ultimate Wear OS experience or if you want to be able to call. The bracelet and clasp is quite unique and I really like how fast it can get on your wrist as compared to the typical straps that most watches come with.

Nonetheless, if you don’t like that, you could always buy another version in Fossil’s Gen 5 series or swap it out with any strap that uses a 22mm connector.