Skip to Content
Just like twins, the Ticwatch E2 and Ticwatch S2 are very similar, with a few cosmetic differences. But their DNA is exactly the same. So how do you choose? 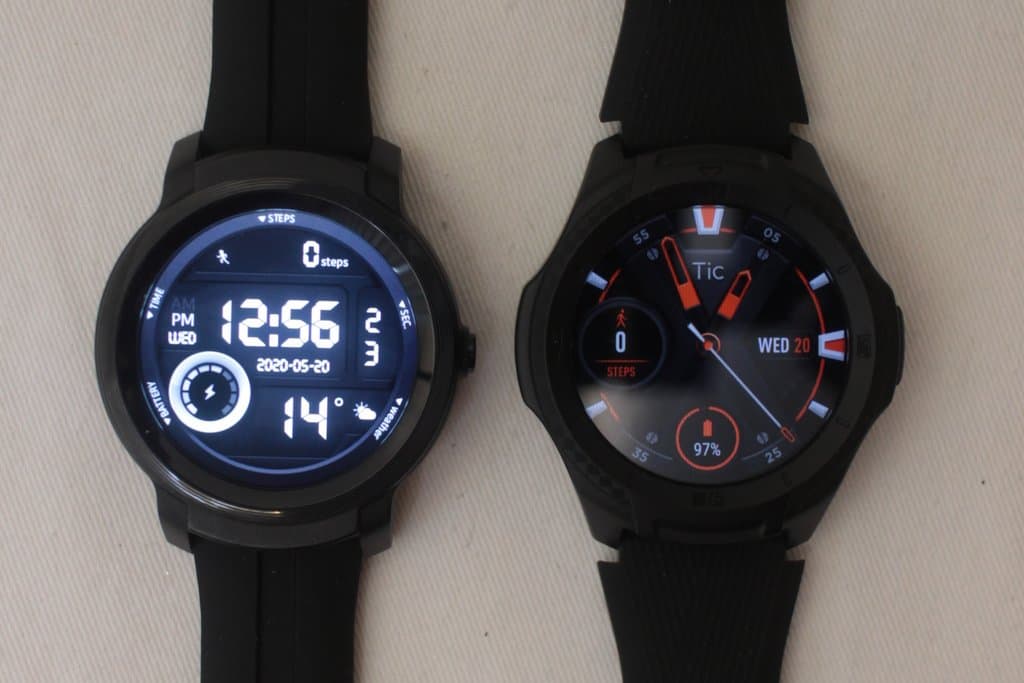 When I received the Ticwatch S2 right after reviewing the Ticwatch E2, I immediately felt a sense of familiarity and disconcert.

On the one hand, the Ticwatch S2 looked 95% similar to the Ticwatch E2. Dabbling further, I realized the hardware, OS and software are 100% similar. Mobvoi certainly made two watches that are hard to distinguish.

So therein came my sense of familiarity. In a sense, the watches were so similar I’d be writing a review for something that I know very profoundly, but then again, the challenge here is to write something that points out the differences between them.

That’s quite hard. I mean, have you ever tried to compare twins? Plus, these watches don’t have a personality to differentiate them. 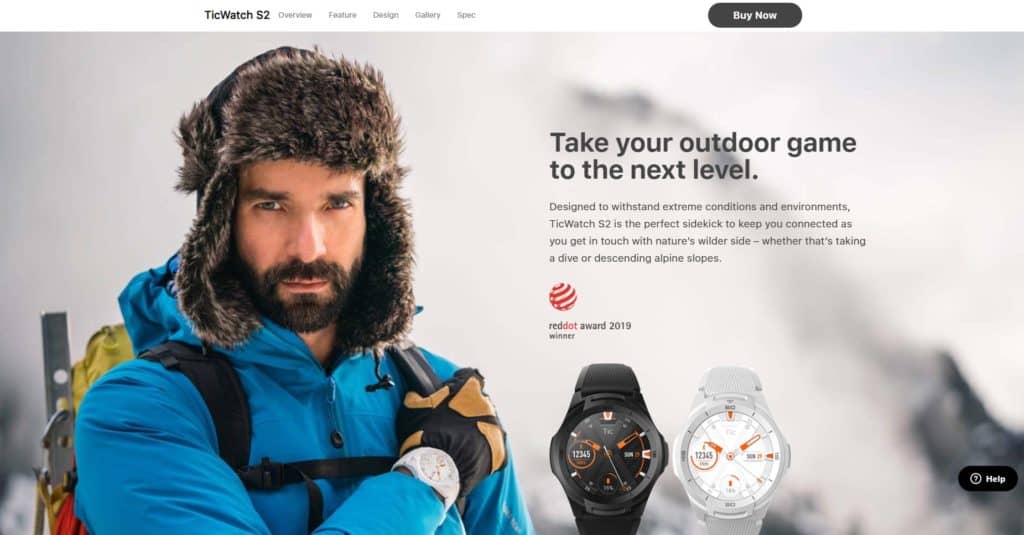 Mobvoi’s website provides us clues as to what the manufacturers are thinking.

On the surface, both watches are targeted at outdoorspeople. The landing pages for both websites show people doing all manner of sports including swimming, mountaineering and skateboarding. 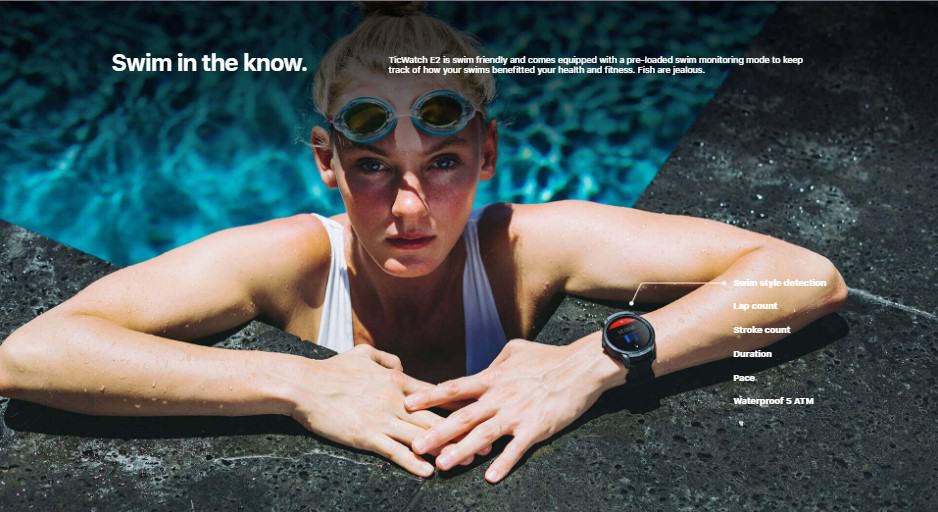 The Ticwatch E2 does tend towards more common sports. The Ticwatch S2 does try to give you the Bear Grylls feel. On Mobvoi’s website, you see mud, snow, rocks and big waves from surfing for the Ticwatch S2, while the Ticwatch E2 is all fair-weathered and sunny, suggesting that the second is for casual, city sports.

Ultimately, Mobvoi classifies the Ticwatch E2 as a “fitness” watch while the S2 is an “outdoor” watch. One very obvious difference is that the Ticwatch S2 has a US Military Standard 810G rating, which means the S2 is operational between -20ºC to 55ºC; resistant to humidity, dust, and salt fog.

So perhaps that’s where the differentiation is and you’d pay more for the privilege of owning the Ticwatch S2. 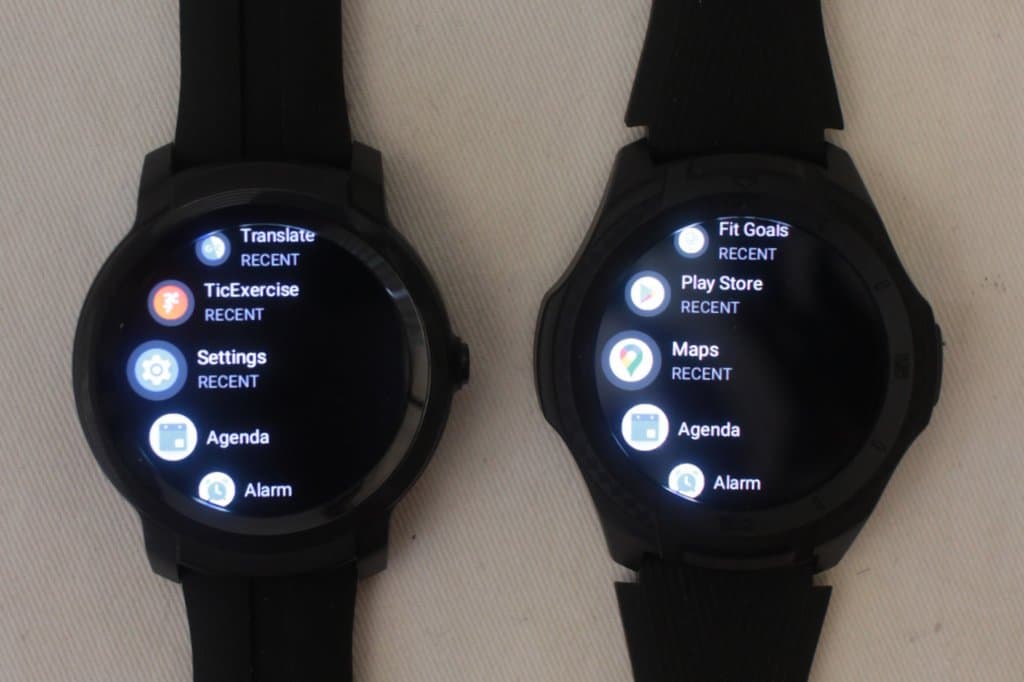 For a watch that is almost similar, the Ticwatch E2 feels much more comfortable than the Ticwatch S2, and I can’t pinpoint why.

Both of them are lightweight watches that have a silicone strap and a plastic watch case. The Ticwatch S2’s strap has stripes, while the Ticwatch E2 is plain. That’s the difference.

Both the straps are quite thick and you’ll notice, when typing, that it props your wrist up. Both of them have the same heart rate sensor bulge on the rear of the watch case.

But for some reason, the Ticwatch S2 has a more palpable presence on my wrist… 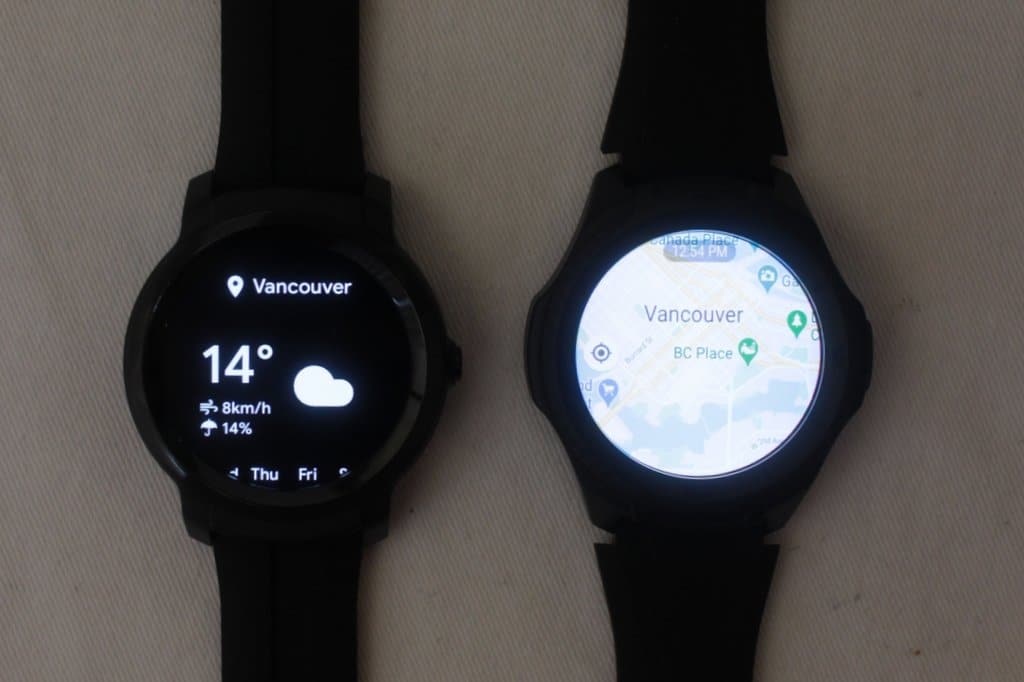 Let’s get the most obvious things out of the way first.

Built on the Wear OS, the two watches offer up the best of Google’s range of offerings. First up are the apps that you can get access to.

Google pre-loads all Wear OS watches with some of its Google Apps including Google Fit, a lifestyle and workout tracker, and also a weather app and a Google Translate app.

The app store has quite a vast selection of apps for a smartwatch and you can download other Google apps including Google Keep and Maps.

I found it to be particularly useful to have a map app on the phone. Sometimes, it’s incredibly inconvenient to refer to your phone for a map such as when you’re cycling. Having a watch with the ability to tell you directions is really useful and I am glad that both smartwatches allow you to do that. This is especially useful since these watches are meant for the outdoorsperson.

To cap it off, Wear OS offers the best voice assistant on the market. Google Assistant is very dynamic, understands your queries and can help you with many tasks from simple math, to starting timers, to finding directions. A great voice assistant greatly enhances the use of a watch because it reduces the number of tedious tasks. 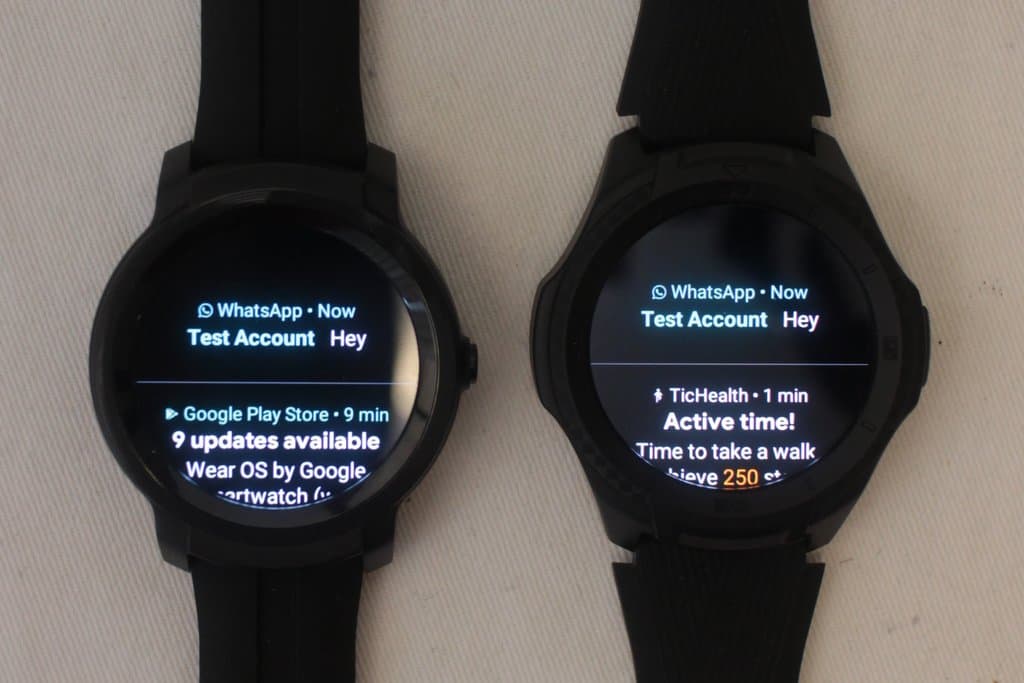 With the Ticwatch E2 and Ticwatch S2, you are able to receive emails and texts through your notifications. If you are on an Android, you will be able to reply to them.

You can reply to texts and emails by using a pre-composed reply, by using the keyboard, by handwriting letters or through the speech-to-text system.

The last option is the most efficient option, and thanks to Google’s excellent speech transcription service, most of the time, you will get your messages transcribed accurately and reliably. 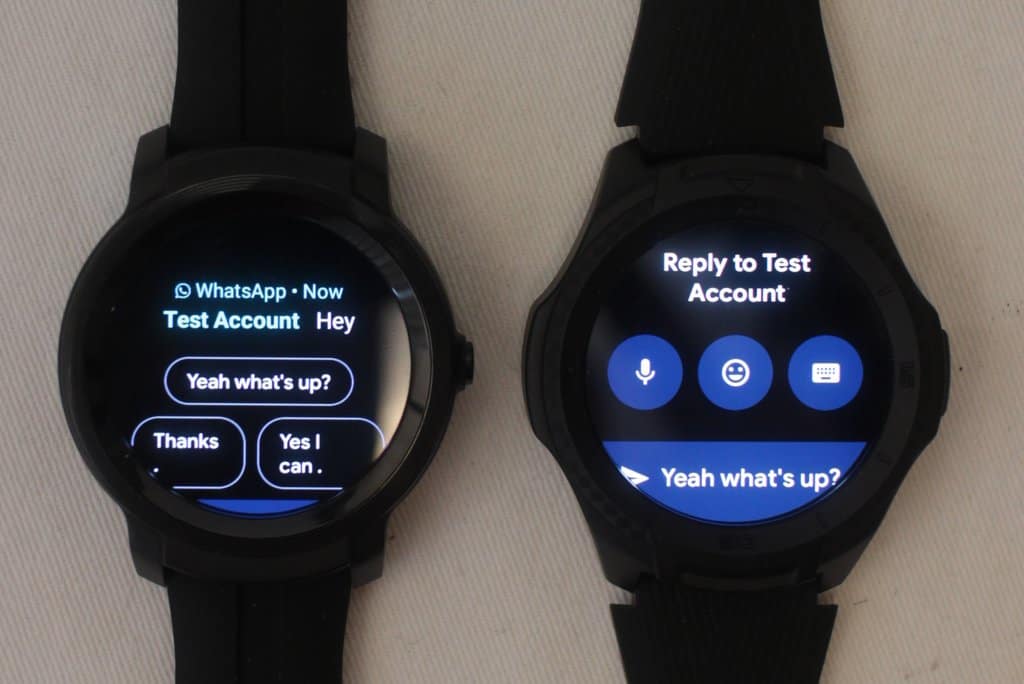 The other options are OK when you’re in a quiet environment and can’t use the speech-to-text function. The keyboard is the next fastest, allowing you to input your messages by tapping keys or swiping your finger over them.

Both watches come with the Snapdragon Wear 2100 processor. It’s a four-year-old processor that has a newer sibling, the 3100, which is widely employed on Fossil’s range of Wear OS smartwatches.

Nonetheless, the performance of these watches are OK for the most part. Sometimes you will see slowdowns here and there. Unexplained pauses are most noticeable when you activate Google Assistant and it does not respond to your speech.

I’d caution not to judge the watch on the first day of booting it up. There’s a tonne (yes, a metric tonne) of apps to be updated and new apps to be added at the start which makes the experience excruciatingly slow and frustrating. 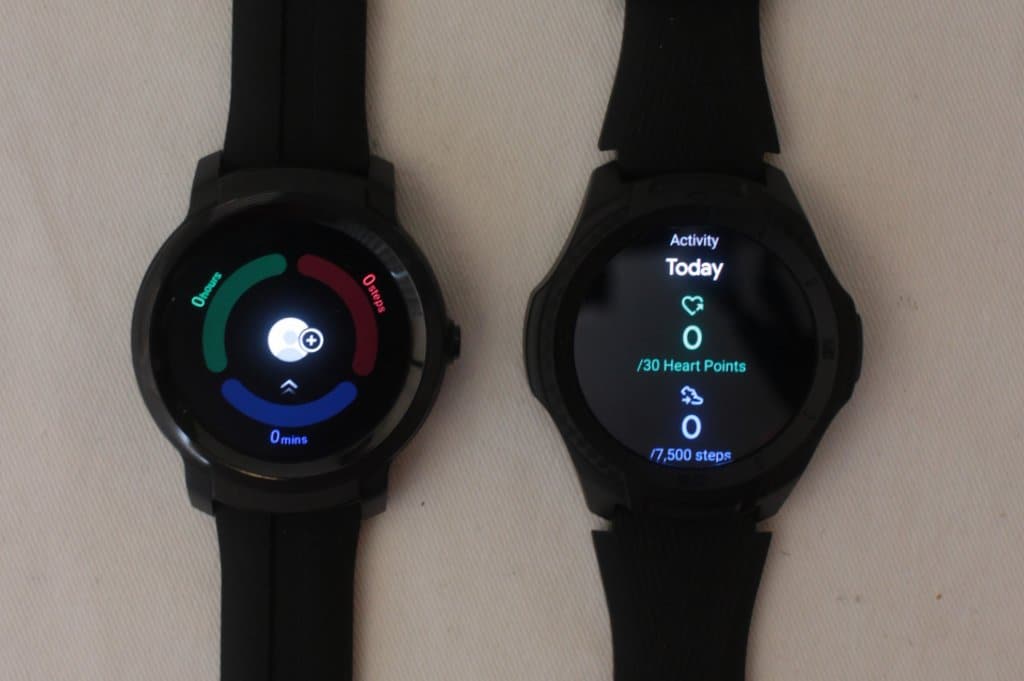 OK, so these watches are marketed for the outdoors.

First of all, don’t take these watches on a multi-day expedition and expect that its battery will last. Both of them will last two days in my tests. So if you want to track your workout for hours and hours, be wary that the battery will run out.

It helps that the watch’s preference is to piggyback on your phone’s GPS rather than its own internal GPS, but that also has implications on your cellphone’s battery life.

Nonetheless, you can confidently take these watches into the swimming pool. This is a great feature that is becoming increasingly common across smartwatches, but oddly not a feature on the flagship Ticwatch Pro.

Tracking your workout requires you to decide if you want to use Mobvoi’s proprietary range of apps — TicHealth, TicPulse and TicExercise — or use Google Fit. Both systems overlap each other very significantly.

Some advantages that Google Fit has include more choices in workouts, a breathing app and a better smartphone app. On the other hand, Mobvoi has an inactivity alert and a pool swim feature. 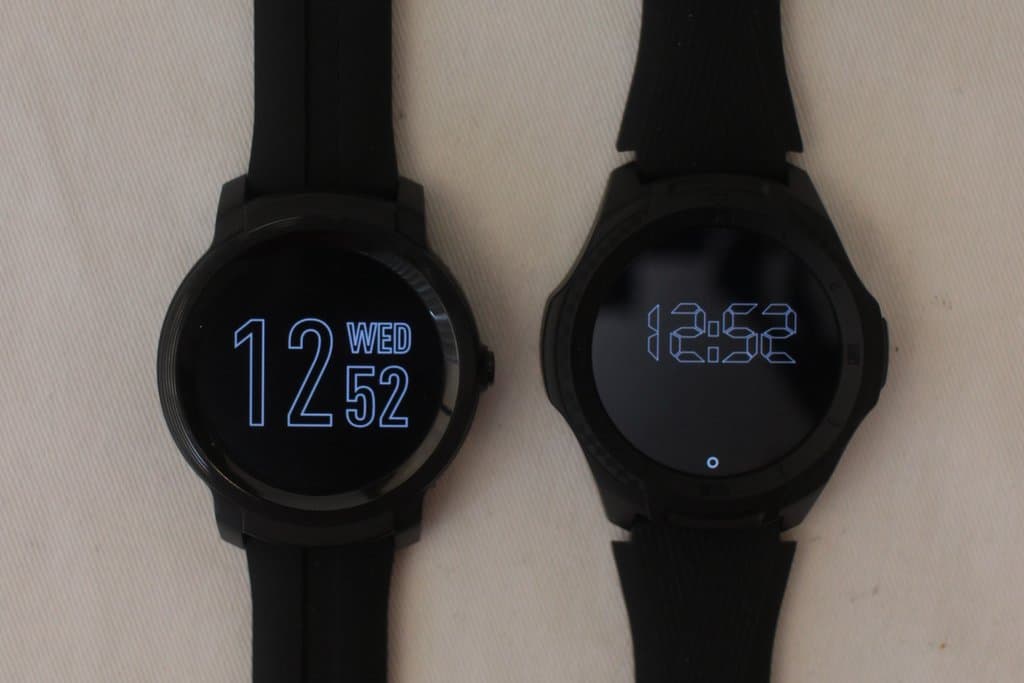 These two watches are extremely similar, but some points of differentiations are their prices and their durability.

Both watches are excellent in being a great entry-level smartwatch. I think you can’t go wrong with either of them.

I couldn’t see the appeal of the Ticwatch S2 for my day-to-day use. I am not a rural outdoorsperson who would benefit from the higher durability standards. So, for me the Ticwatch E2 will suffice.