The Ticwatch E2 and Fossil Sport Smartwatch are great entry-level watches and the differences are small but important. Biggest difference? Battery life. 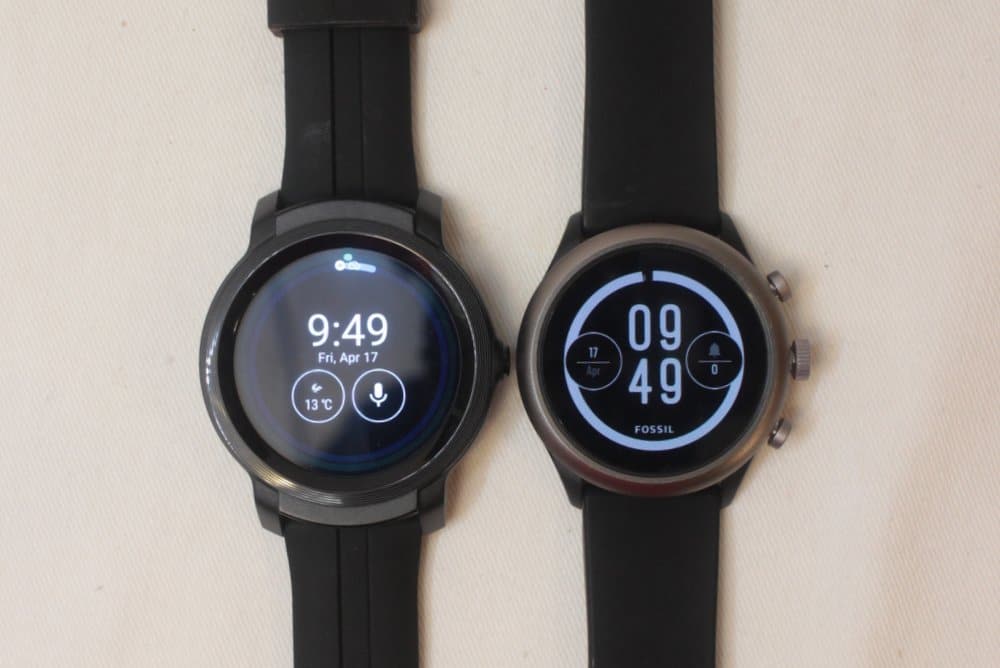 I love these comparisons. Two equally spec’d watches that would attract the same type of consumer.

At the same time, writing this review almost feels like I’m finding a needle in a haystack. The Ticwatch E2 and Fossil Sport Smartwatch are extremely similar, running the same OS, have very similar hardware and have a very similar shape!

How does one even make a decision? 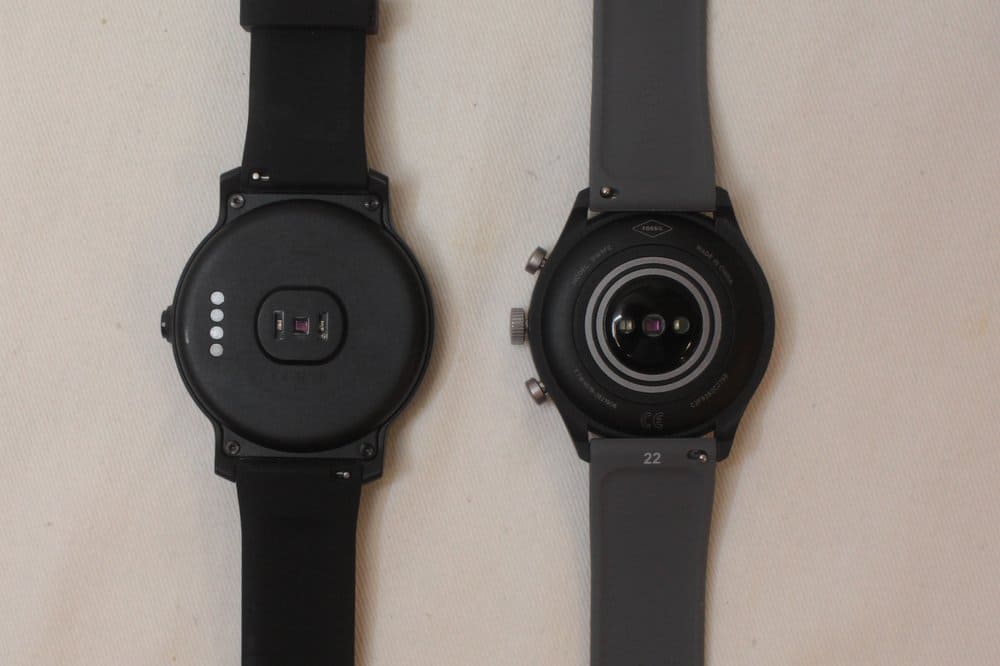 While both of them are very similar under the hood, they are very obviously two different beasts in size.

Both watches are also equally lightweight and comfortable. One of my biggest gripes with heavier watches is that they start becoming very noticeable after a while and require a tight strap in order to keep them from sliding around your arm.

I am happy to say that there is no such problem with these watches.

The Ticwatch E2 has a thick bezel where the screen is recessed into. That means that if you accidently slam the watch on a wall, the screen won’t be taking the brunt of the damage. Whereas the Fossil Sport’s screen is flush with the bezel, and therefore will be in contact with whatever impact you might accidentally lay on it.

The Fossil Sport has two buttons and a rotating crown. The Ticwatch E2 has a just one button. It might seem cooler and more minimalistic to have one button, but I honestly feel that the Fossil Sport is a lot faster to work with because you can scroll with the crown and you can program the buttons to do various tasks. 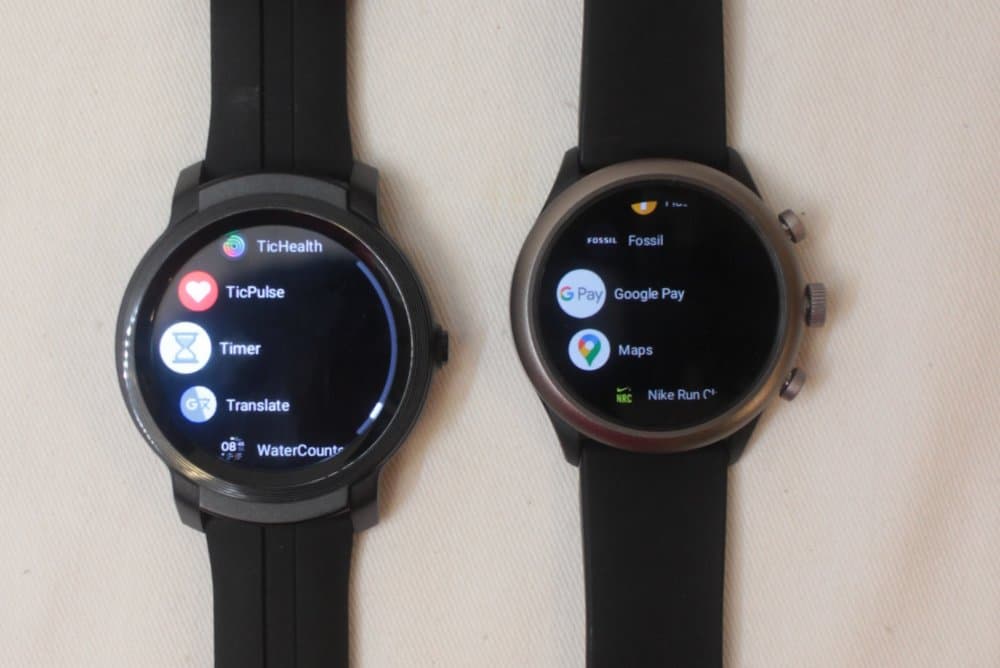 This is a major point of difference between the two. In my experience, a generally larger watch tends to be better at battery life.

Unfortunately, I can’t fathom using a watch without the always-on screen, and it’s a feature that hampers battery life. But I really, really dislike having to jerk my wrist to wake the watch up. I like to be able to see the time from all angles.

With the always-on screen activated, the continuous heart rate monitoring off and some use of the sports functionality, the Ticwatch E2 beats the Fossil Sport by far. At the very worst, the watch can last one full day before you have to charge it, if not two days.

The Fossil Sport is a bit less reliable. It might last a full day if you do not overtax its systems by using its integrated GPS, for example. However, it almost seemed like the watch would go into its battery saver mode every other day. 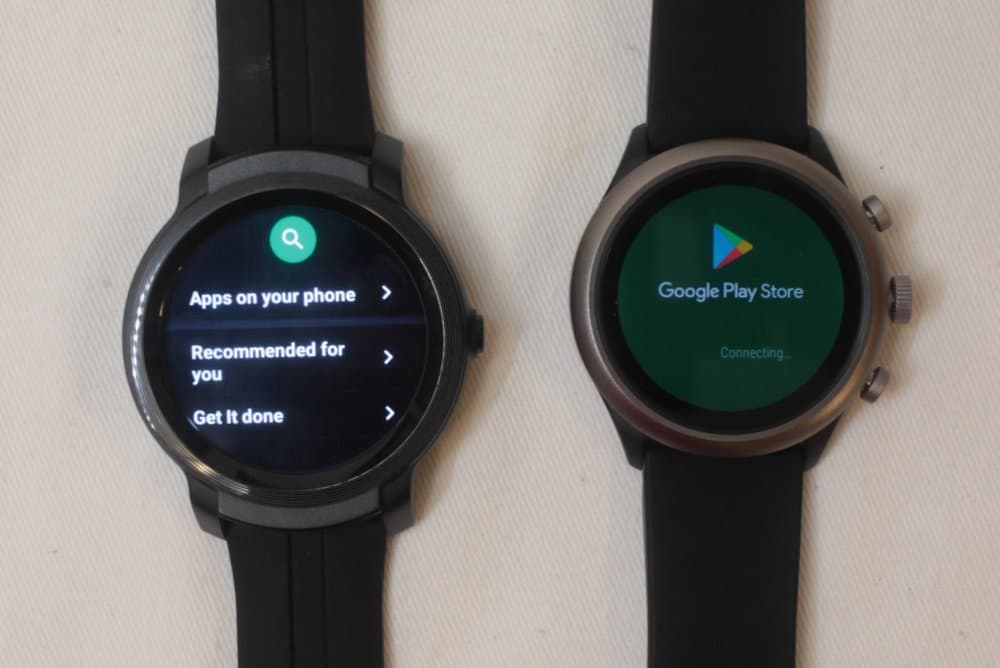 Wear OS is great. You just can’t go wrong with it.

It has a wide user base which means that it has many developers building apps for it.

The Google Play app store is full of very useful apps that include Google Keep, Translate and Maps.

Unfortunately, Google Wear OS can also be very slow. Most things on the Ticwatch E2 are quite smooth and elegant, despite it having an older Snapdragon Wear 2100 processor. The Fossil Sport, with its Snapdragon Wear 3100, can sometimes be even slower and hangs once in a while.

If you like paying with your smartwatch, note that only the Fossil Sport Smartwatch has Google Pay. 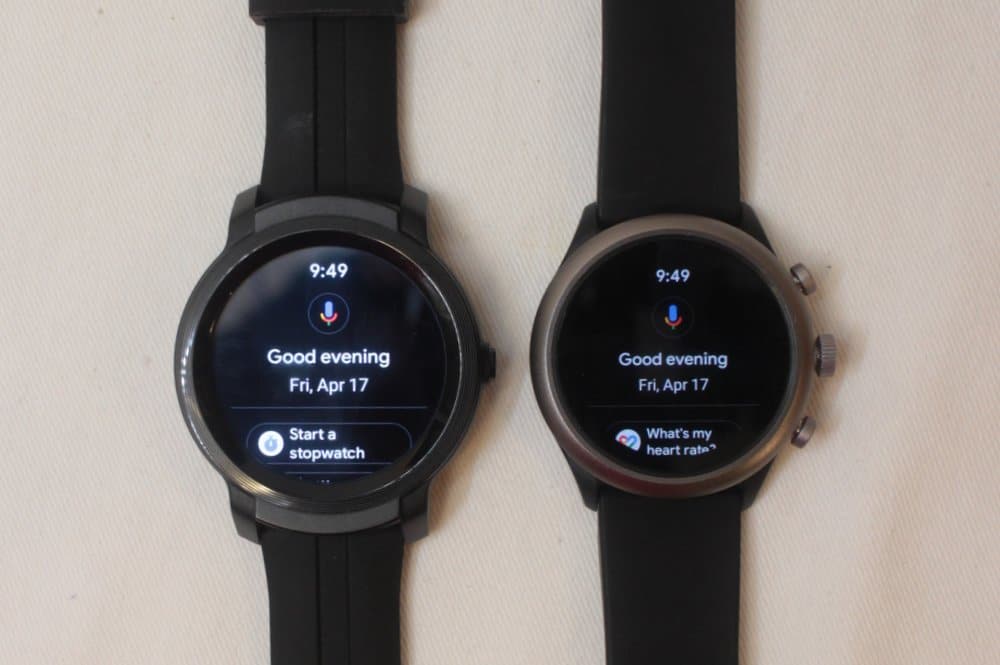 But the best part of using a Wear OS is Google Assistant.

I really love using Google Assistant because it helps you do all sorts of tedious tasks. For example, I really hate fumbling with my smartwatches to set a timer when I cook pasta. So I tell my watch to do it for me.

Most watches can interpret the instructions properly. What I realized is that Google Assistant ranks as one of the most reliable voice assistants out there. It’s likely because they have a lot of data to be used to predict what you’re trying to say.

Both watches can be slow when it comes to activating Google Assistant. What I have found frustrating is that the Ticwatch E2 seems to hang about a quarter of the time on the “Speak now” screen. You can speak your instructions but Google does not register it. 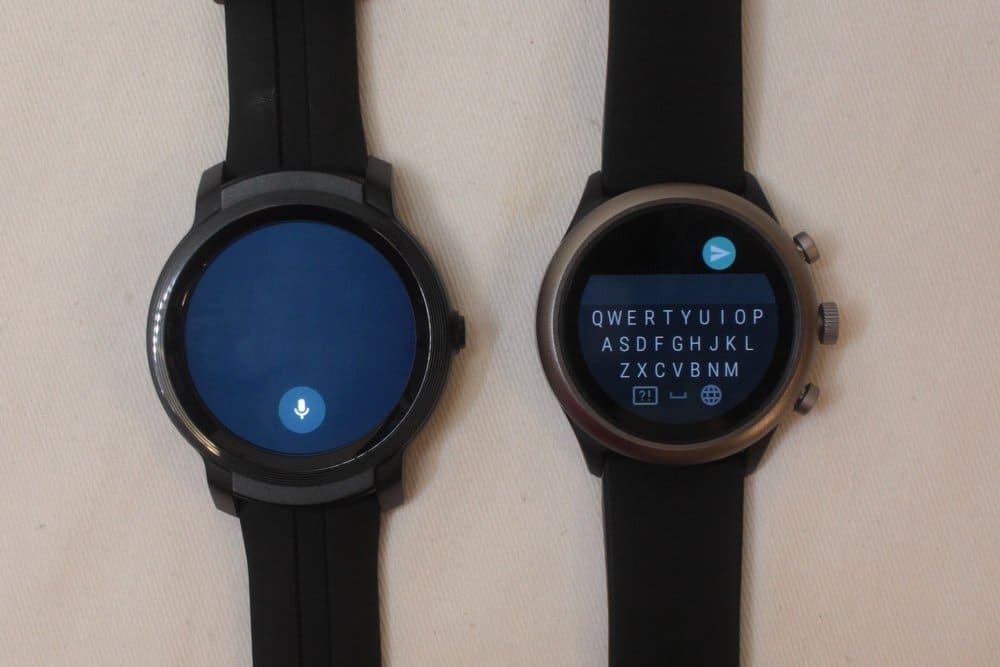 Emailing and texting is great with Android phones.

Whenever you receive a notification on your smartphone, it gets forwarded to your smartwatch.

You can then reply to them using a keyboard, speech-to-text or by drawing letters to form words.

I use a Samsung Note 9 so I did notice a bit of a difference between Wear OS watches and Samsung watches. Samsung smartwatches go a step further and allow you to access your email and messages as if you were on your phone.

This isn’t possible on these smartwatches without the installation of various third-party apps on both your cellphone and smartwatch.

Compatibility with Apple iPhones is decent, though it’s a bit lacking if you compare it with an Apple Watch. For example, you can read your notifications but you will not be able to reply to them.

To put this into perspective, the Apple Watch costs multiple times the cost of the Ticwatch E2 or Fossil Sport. It’s truly an amazing watch, though. 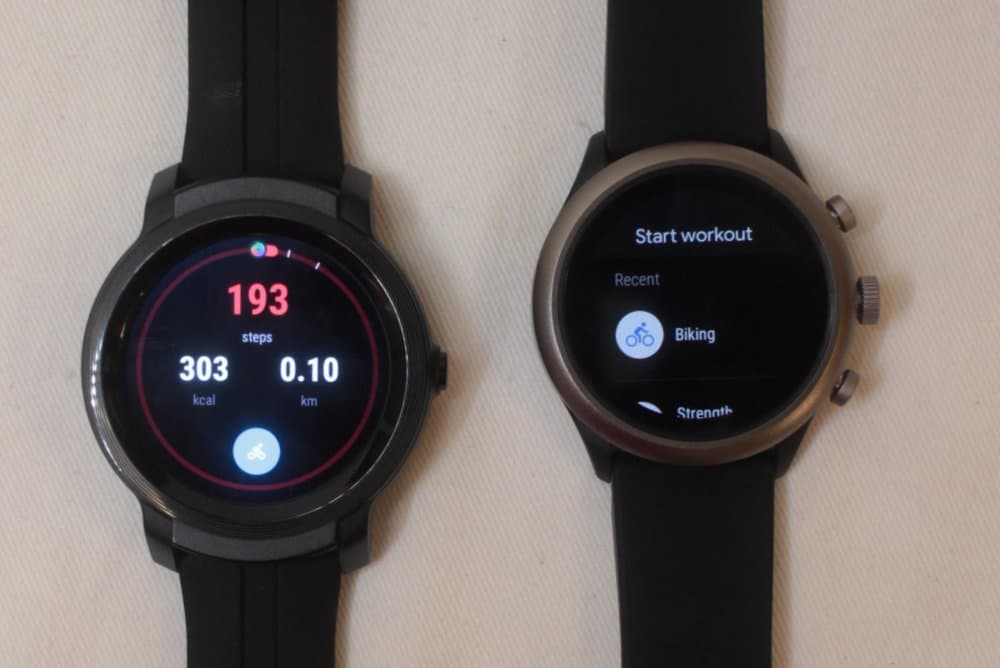 Both watches market themselves as sport watches. The Ticwatch E2’s web page shows many 20-somethings doing a bunch of fun stuff like skateboarding and swimming, and the Sport’s name already encompasses its target audience.

Both watches are waterproof for swimming and have a good heart rate sensor. They also have an integrated GPS for tracking your exercises without relying on your phone being nearby to relay the information.

The issue with that is the GPS is very battery intensive. On the Fossil Sport, that could mean that you will have to have a charger handy if you are going to be exercising for a while. The Ticwatch E2 doesn’t fare that well either under the strains of using the internal GPS.

Both watches have Google Fit, which in my opinion is superior because you can track a lot of exercises on it. However, one thing you can’t track with Google Fit is swimming.

The Ticwatch E2 also has some interesting features including an activity reminder and a handwashing timer that reminds you periodically to wash your hands, given this COVID-19 period.

Overall, the Ticwatch E2 is superior because of Mobvoi’s apps. 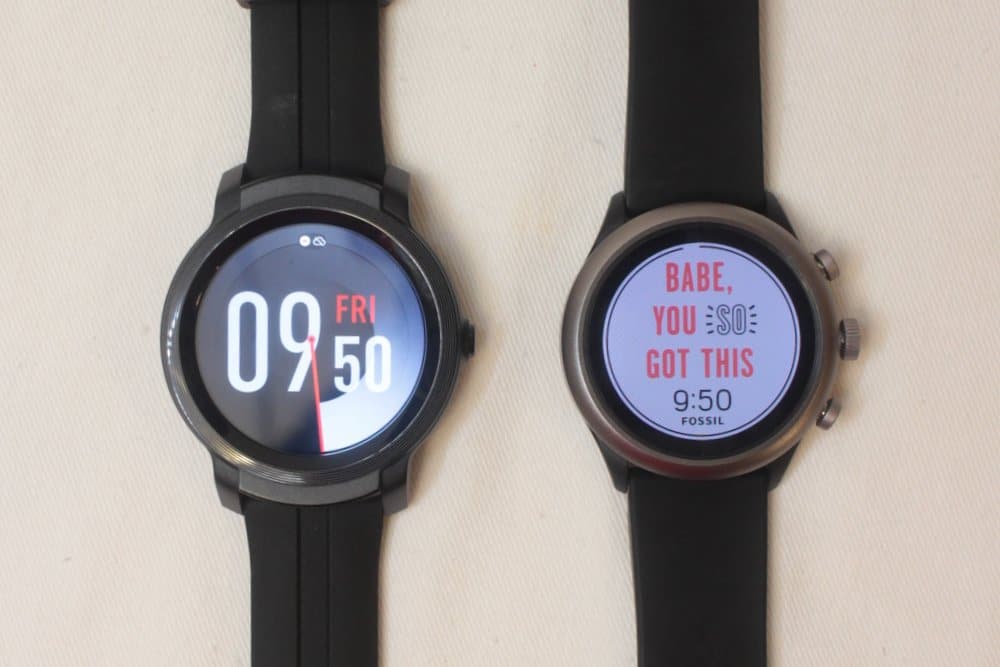 You can’t go wrong with either watch so I’d recommend you to see what you like and the price that either watch is going for.

Most differences are negligible, to be honest, except for the more limited battery life of the Fossil Sport. That is honestly a major inconvenience and one of the most important considerations to weigh against the difference in price.